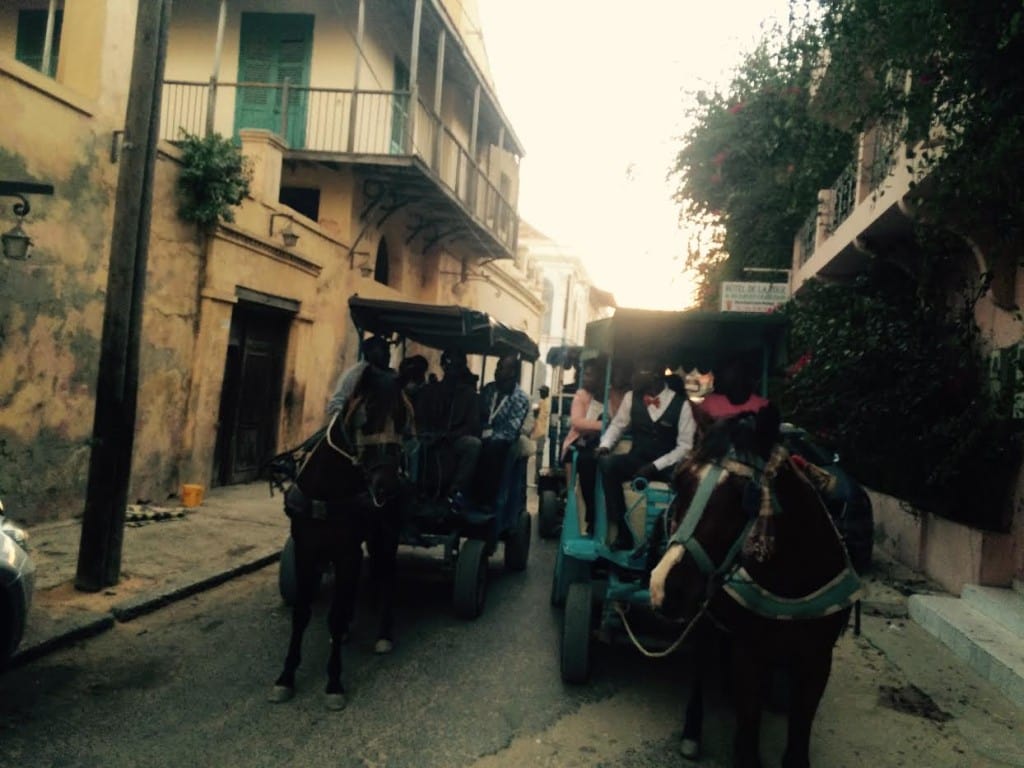 Hostelya, a gathering of 100 tourism professionals, entrepreneurs, and artists from West Africa and beyond, took place recently in Saint Louis, Senegal. The forum’s main objective was to highlight the need to adjust Africa’s hospitality industry in accordance with our cultural realities in a global context.

Hostelya is the brainchild of its president, Senegalese education entrepreneur Amadou Diaw who is convinced that in order to be competitive, the major challenge of the African tourism industry would be to rethink the “African Art of Receiving,” which is rooted in our traditions and realities while remaining open to the world.

Tucked between the Senegal river and the Atlantic ocean, Saint Louis is located at the edge of the Sahara desert (just south of Mauritania). This charming city, once the capital of French colonial West Africa, is a natural crossroads: for countless generations, desert, sea, or river travelers have passed through Saint Louis.

These different influences must be part of the reasons why Saint Louis is known as the gastronomic capital of Senegal and the birthplace of Senegal’s famous national dish: Thiebou Jenn.

Visiting the old city, located on an island, feels like time traveling.

Although much of the city’s crumbling colonial architecture is in need of restoration, the city didn’t lose any of its magical charm and teranga, the legendary hospitality tradition of the Senegalese.

Although I didn’t know what to expect when I received the invitation to address Hostelya’s audience, I was thrilled to be part of the reflection on the African Art of Hospitality at a moment when the tourism industry of a whole continent is suffering major setbacks due to the Ebola outbreak in only three of its more than 50 countries.

Facing an attentive audience, we all agreed that Africa’s contribution to the global hospitality industry could bring a unique and sought-after flavor provided we tap in to the well of our traditions in order to reinvent the African art of hospitality for the 21st century.

This achievement will require the combined efforts of artisans and designers who can create a space with an African feel and comfort, farmers and chefs to create menus that are inspired by African culinary traditions, and most importantly, policy makers who will put in place the conditions to realize this vision.

Entrepreneurs, of course, cannot be left behind.

Also in attendance was Herve Fleury, director of the prestigious Paul Bocuse Institute School of Cuisine, who announced the opening of a branch in Dakar.

After the morning session, we were treated with a most-delicious thiebou jenn, eating around large bowls as we sat directly on straw mats or on low wooden benches.

Nothing was missing in the thiebou jenn (see recipe below)! It was prepared by expert hands with a meaty thiof, Senegal’s favorite fish; stuffed with the ubiquitous (and spicy) parsley mixture known as rof; and served with a side of the most-tender carrots, eggplants, and cabbage slowly cooked in a flavorful tomato broth alongside tiny red grains of broken rice and of course small fish balls that are unique to Saint Louis’ thiebou jenn.

Sitting around the bowl with me was Moroccan interior designer Hicham Lahlou and our morning session panel moderator Delporte who loosened his tie in order to better enjoy the lunch.

Also around the bowl was Massalik Bally and his lovely wife and daughter.

Lunch was followed by the traditional Senegalese tea ritual, which Hicham noted had much similarities to Moroccan green tea with mint.

Although I wanted to take a nap after lunch to recuperate from my travels, l managed to attend a round table on “Revisiting the African Table in a Global Context.”

Other workshops were centered on the following topics: “Hotels: Window of a Terroir,” “Codes of the Hotel Industry in Africa,” and “Career Training in the Hospitality Industry.”

After the workshops, we went on a tour on a horse carriage of the island. Known locally as caleches, horse carriage rides are, by far, the best way to enjoy Saint Louis’ charms.

That same evening, we were invited to a dinner reception on a restored colonial boat named the “Bou El Mogdad,” which was anchored near Saint Louis’ famous bridge: Pont Faidherbe. 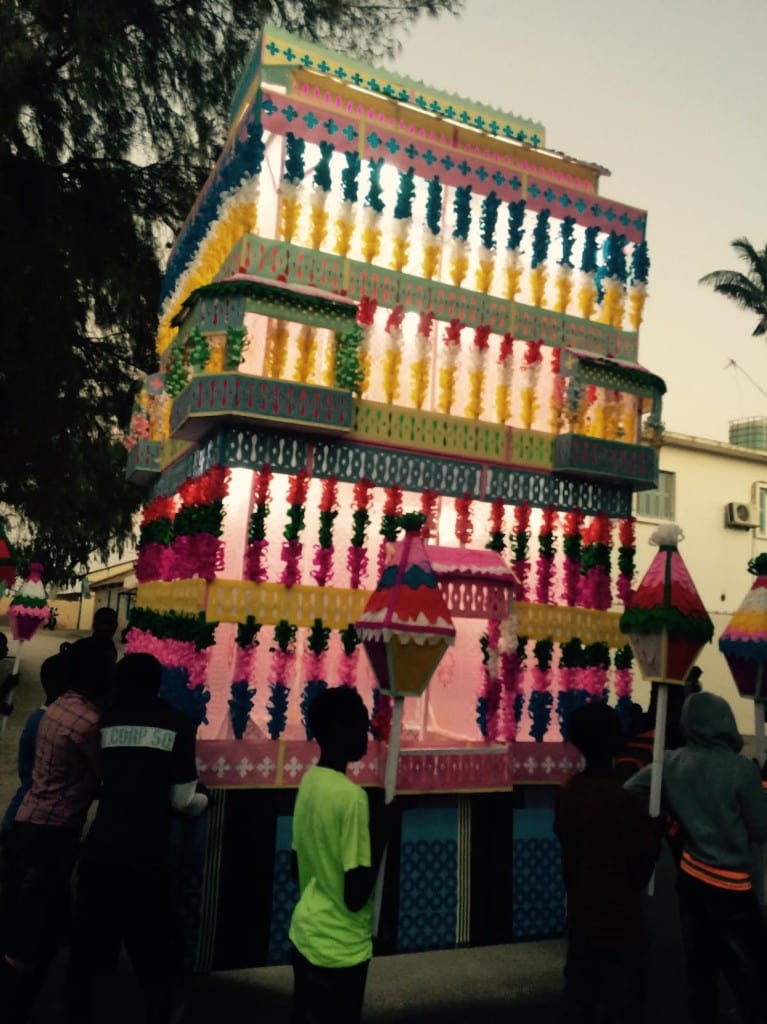 From the boat’s deck, we enjoyed a nightly drum and dance session known as “sabar” in Wolof, and we watched a Fanal parade. “Fanals” are an old Christmas season tradition of Saint Louis, but for the occasion, it was organized to celebrate Hostelya: They consist of elegant and elaborately prepared vessels with colorful lanterns that can be as tall as 5 meters high. They are carried around the island cadenced by the beat of the drums.

A fashion show from the collection of local designer Rama Diaw, a buffet dinner under the starry Saint Louis’ sky, live jazz and Afro-Cuban music ended the day in style.

Needless to say, I was sated and ready to sleep when I finally entered my room in the gorgeous boutique hotel Au Fil Du Fleuve.

The next morning, I was awakened by a bright sun shining over the shimmering river. From my window, I could see colorful fishermen canoes floating under the bridge. 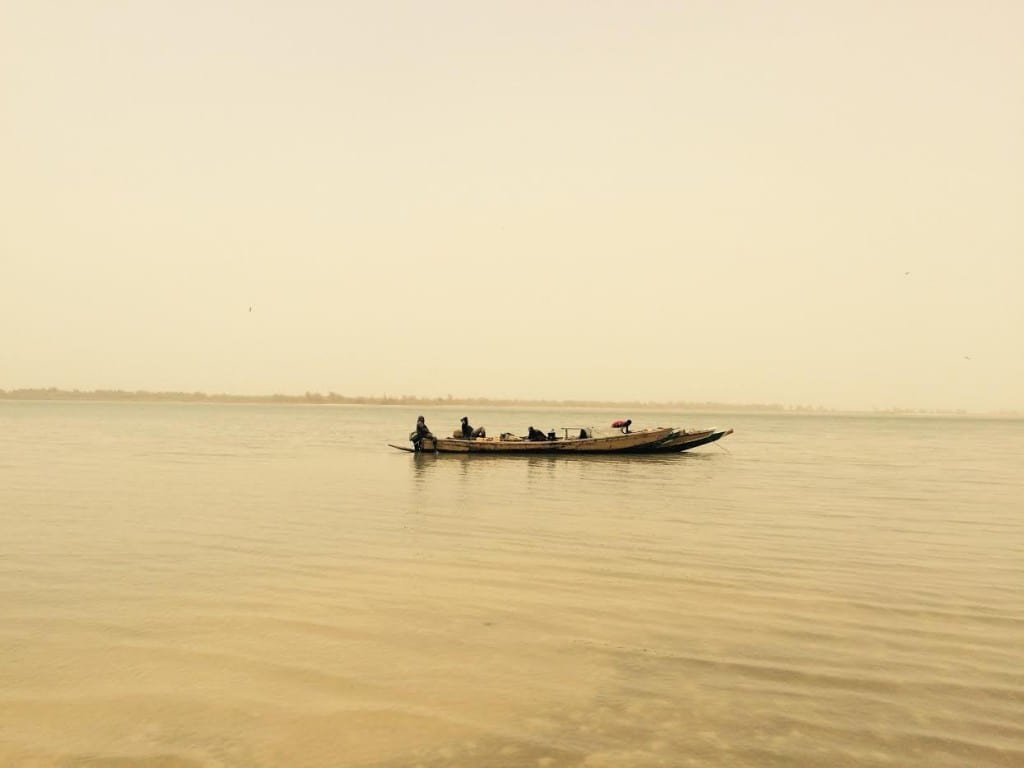 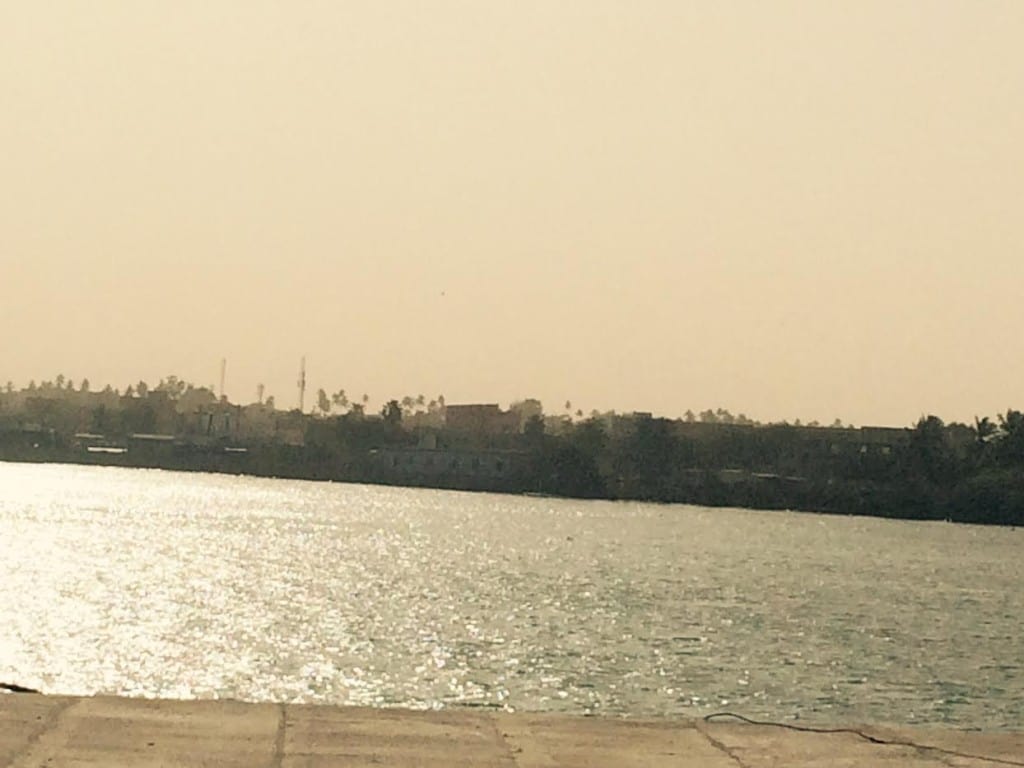 Downstairs, I was greeted by our charming host, Marie Caroline Camara who prepared a lovely breakfast, using only fresh local goodies. Her table spread included Casamance honey to sweeten her handcrafted yogurt made from neighboring Fulani herder’s goat milk. She also served a moist banana cake and a naturally sweetened beets cake with all sorts of fresh jams from coconut, white hibiscus, corosol…homemade exotic juices, mango, “madd,” and my favorite, “ditakh,” a sweet and sour local fruit. 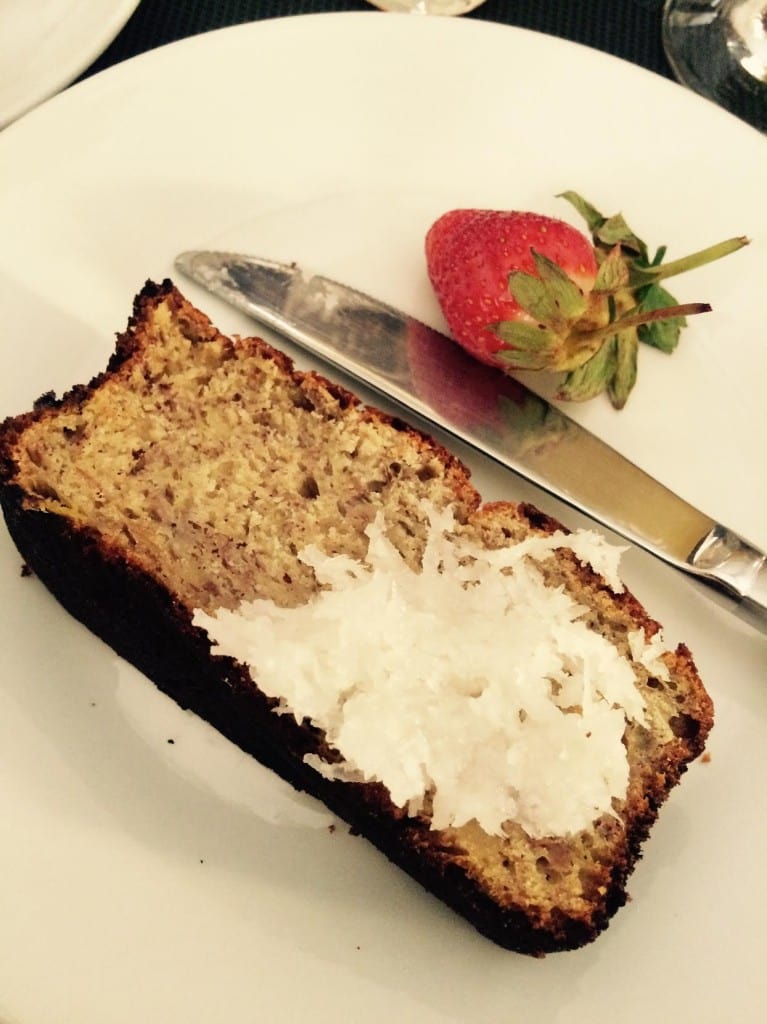 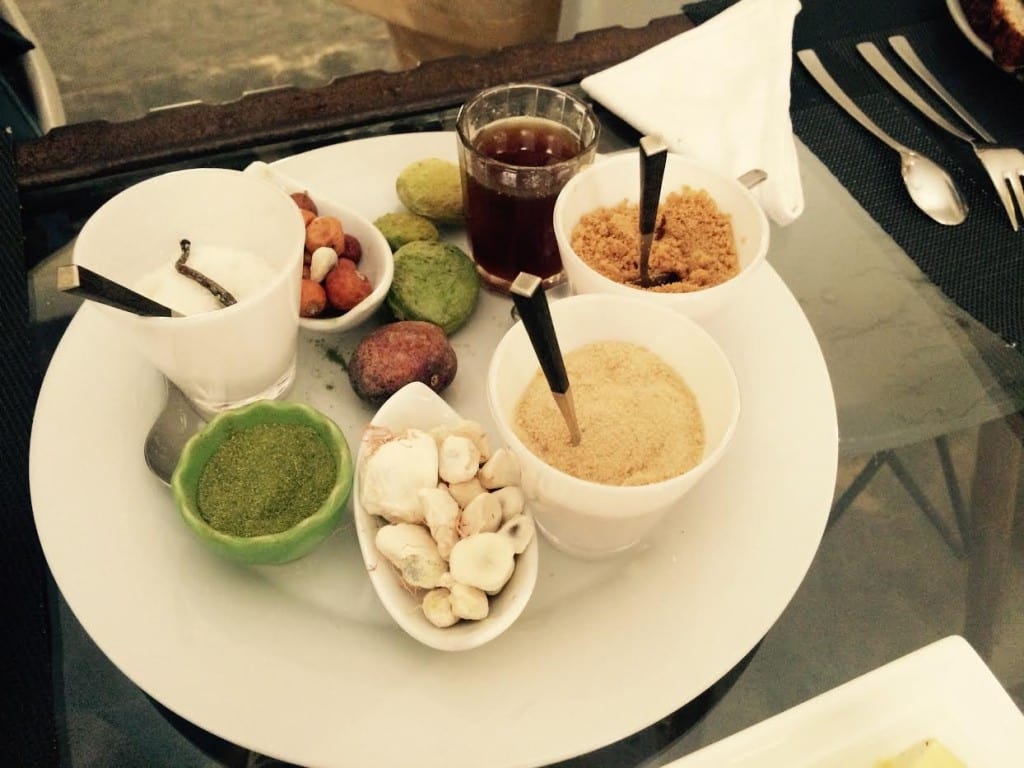 Other condiments were made out of baobab fruits, moringa, jujubes, as well as fresh local strawberries.

While indulging in Marie Caroline’s warmth, I heard some choir singing coming from the street. We looked out the window and saw a procession of Catholic faithfuls walking down the streets toward the cathedral.

Since it was Palm Sunday, they were each carrying a branch of palm tree with their unique Saint Louis flair. It dawned on me that I was in Senegal, a majority Muslim country that takes great pride in its religious diversity and its hospitality. 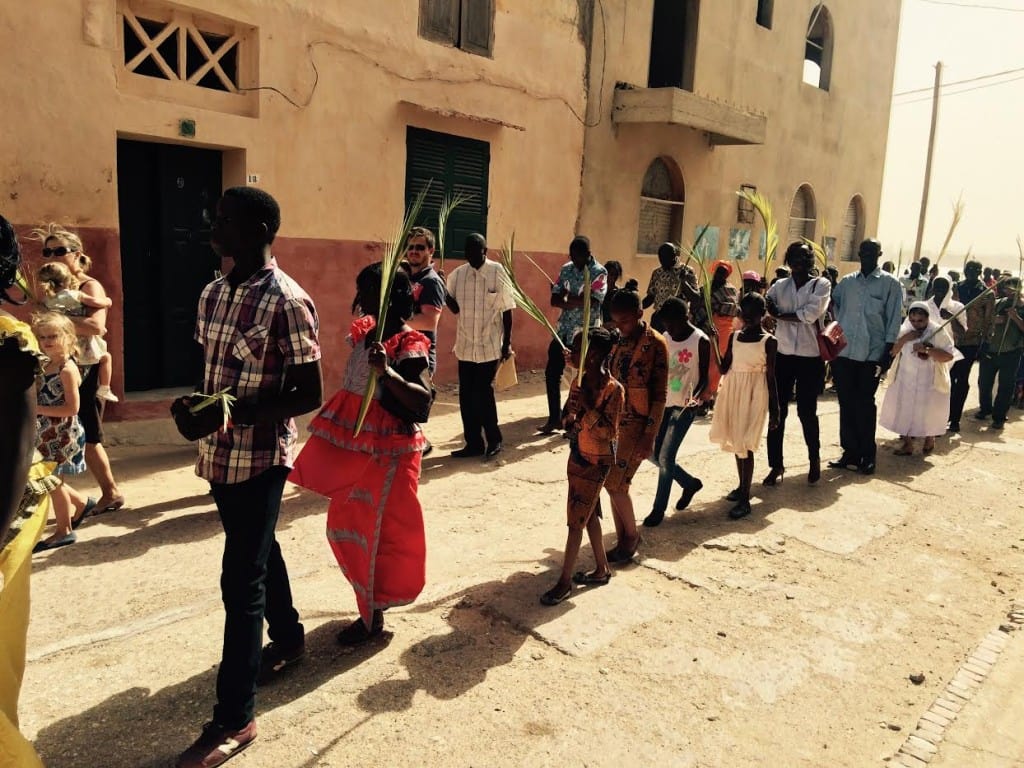 There couldn’t be a better way to start the day.

Moving forward, Hostelya can certainly pave the way to an authentic renaissance of an African Art of Hospitality in the 21st century.

See the rest of my experience in photos here:

2 palm-sized pieces of guedj (salted, fermented fish, such as cod or herring)

2 carrots, peeled and cut into chunks

Salt and pepper to taste

1. After cleaning fish, cut two deep holes into each steak and stuff with rof (see recipe below), and then coat fish with remaining mixture. Set aside.

2. Heat vegetable oil in large pot at medium high. Add 2 pinches of salt, onions, green peppers and tomato paste; lower the heat to low and stir well. Simmer until soft 10-15 minutes or until the paste turns a dark orange, stirring occasionally to avoid scorching. Add 5 cups of water to the pot to dilute the tomato paste. The paste will thin, becoming sauce-like. Return to boil, simmering about 30 minutes.

3. Carefully add fish steaks to pot, including head and tail, as well as the cabbage, pinch of black pepper, bissap, and Scotch bonnet peppers, and cook uncovered for about 30 minutes over medium heat.

4. Remove the fish from the pot and set aside in large bowl. Add guedj (salted, fermented fish) and snails***. Leaving lid ajar, simmer for 10 minutes and then add turnips, eggplants, diaxatou (bitter eggplants), butternut squash, manioc, carrots, and okra. Return to boil and add/adjust seasoning. Simmer for another 30 minutes.

5. Remove the vegetables from the pot and place in a large bowl with a couple ladles of broth (ñeex). Add the tamarind into each of the bowls (vegetable and fish).

6. Add rice to the pot and mix well once. Bring to a boil and reduce heat to low. Use ladle to scoop excess oil from top of the pot and discard. Cover with a tight lid and cook rice until tender, about 30 minutes. Rice should not have much oil on top. Consistency should resemble dirty rice or jambalaya.

7. When the rice is finished, scrape the crust (xooñ) from the bottom of the pot and preserve in small bowl to be served on the side. On a large platter, arrange the fish and vegetables evenly over the rice. Serve with lime wedges.

For the rof, or stuffing for fish, purée in food processor or mortar and pestle:

*** If you don’t have Guedj and fermented snails you can substitute them with 1 cup of fish sauce.