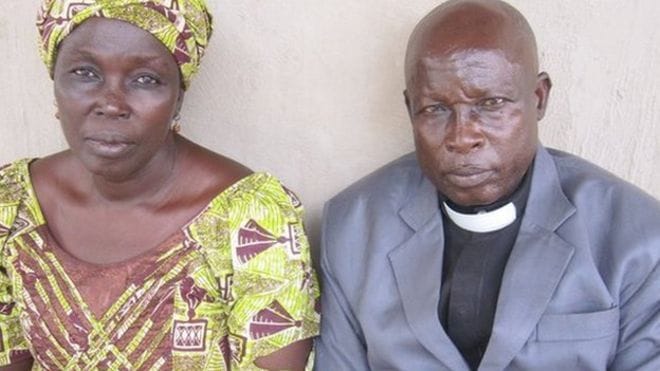 With the one-year anniversary of the Chibok girls being kidnapped ocurring this week, many of the affected parents continue to speak out about their experience and their hope against hope that their daughters are still alive. Reverend Enoch Mark (pictured left with wife) recently spoke to the BBC about what he and his family’s experience has been like since losing both his daughter, Monica, 20, and adopted daughter, Sarah Samuel, 18, on April 14th.

Since the abduction of Monica and Sarah we’ve been in some kind of condition, but I cannot describe it.

We are not able to sleep. My wife [has been having] this problem with her blood pressure, we have been struggling, at times when I come and see her alone I meet her crying, at times she cannot eat especially when it was in the early days just after these girls were abducted.

We set a day that we fast and pray so that the Lord will strengthen our daughters and all the abducted Chibok girls, if they are still alive.

My biological daughter Monica, she was 20 at that time she was abducted, and Sarah Samuel [my adopted daughter] was 18.

That day, 14 April, was a very dangerous day. I remember hearing gunshots – all the buildings in Chibok were shaking.

We have little mountains there and they were was echoing the shooting sound.

When we went to the bush, I asked them [my wife and small children] to continue walking but I watched what was going and and saw how they were setting fire on some buildings until the morning. 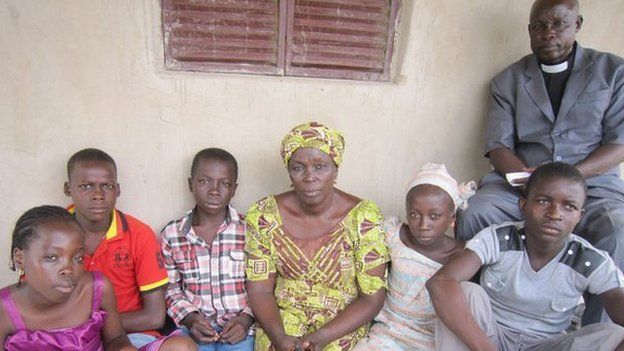 Rev. Mark with wife and children

I managed to get back to my house and took my machine [motorbike]. I went to the school, no pupils were there.

I asked about them and was told that they have taken our daughters, and they showed me the direction they went.

We saw that the girls had dropped their head scarves and dropped shoes along the way.

So I used that as a guide to follow where they went. Somebody told me that my daughter jumped out of the vehicle and she was wounded and she could not walk. It encouraged me to continue to pursue them.

I just went in to the bush to keep on looking and I met two girls – Sarah Lawan and a daughter of my watchman. I took them on my machine to the house. They [had] jumped out of the big lorry that was carrying them — if you would have seen the dust on them, you would have pitied them. So it was those girls who gave me the information that they were kidnapped.

When I was in Chibok, there were some members of Boko Haram who mixed with us, so we did get some information, though it was not first hand and we did not know if it was true or not.

She refused [and] I was told that they dug a hole and buried her leaving her head outside and stoned her to death.

But [an envoy of the government who has been negotiating with the Boko Haram] just some three weeks ago, he called me and told me that my daughters’ names are among the names of the girls they are expecting [to be freed] which shows she is still alive, according to what he told me.

Even if my daughter has been stoned to death, I am the happiest man as a man of God who has brought up my daughter with that kind of faith.

At the time these girls were kidnapped, had the federal government paid careful attention they would have rescued these girls.

I’m not blaming the federal government, but it’s their responsibility to bring the girls back.
When I remember the future of my [other] children it makes me to shed tears, I don’t know how we will end up. Since the kidnapping none of my children has been to school.

Monica, she’s very neat in everything and she’s prayerful all the time.

And one thing that makes me to remember her all the time, [she said] “Daddy I’m praying for you that you will be able to sponsor me, I want to be a doctor I want to help the nation.”

That’s all these things that I remember – and her determination.