When Brice Kemle came to California from Cameroon 20 years ago, his plan was to live with his uncle and enrol in school. But things changed and he later ended up on the streets in a different city, Fontana CA.

He was 18-years-old and could not speak English or Spanish. He spoke French, making his situation worse. He, fortunately, got a job doing maintenance work at McDonald’s after months of searching.

Thanks to a colleague at the company, Kemle found a home, as they got a place together. He soon started improving in the English Language and later enrolled in community college.

Kemle’s dedication to work and school meant he had to prepare a schedule for full-time work and full-time school.

“I did both full-time and it is an experience never to be forgotten. You don’t have a life. I remember changing my work clothes in the car and in the bathroom sometimes, but I learned dedication and organization,” he was quoted by news site lasentinel.net.

His commitment and hard work yielded good results, as, after 10 years of working as a cook and doing other maintenance duties, Kemle finally became a general manager at a McDonald’s in Fontana.

While doing his managerial duties, Kemle earned a Bachelor’s and Master’s degrees in engineering from Cal Poly Pomona. 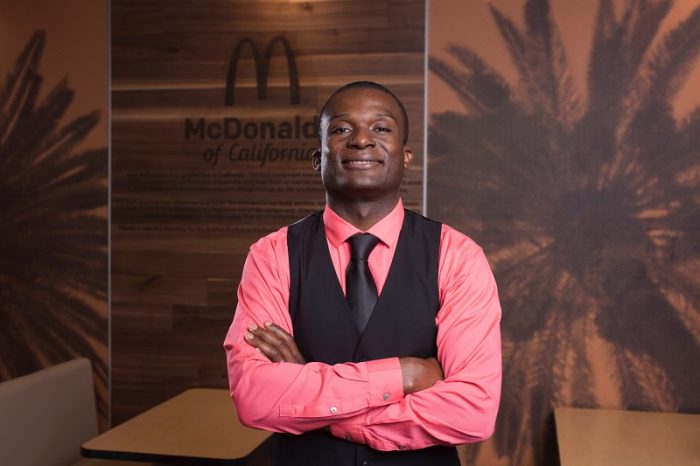 The major move that finally got him to the top was when he applied for a supervisor position being advertised by the company.

He got the job, which came as a big surprise to him. He was now not only going to supervise the service employees but the managers as well.

Kemle was also to run the budget and ensure there is always profit.

Through his self-discipline and organizational skills, Kemle performed very well in his new role and he is now the supervisor of six other locations in Orange County.

“When I applied to be supervisor, I was going for the experience of the application and now I have $15 million to be in charge of. That’s significant. That’s a challenge. I appreciate the trust and responsibility,” he said.

Kemle, who was once homeless, now has two homes and dealing with millions of dollars.

He studied engineering and loves computers, but McDonald’s, he says, has changed his life and career.

Through working with the company, Kemle met his wife, with whom he has five children. He also plans to pursue a Doctorate degree that will be funded by the company.