Huey P. Newton, the co-founder of the American Black nationalist group the Black Panther Party, was born on this day in 1942. Newton’s life was a battle against racism and police brutality, which inspired him to take the path he did to the Black Panthers.

Newton was born in Monroe, La., and was the youngest of seven children. His father, Walter, was a preacher, and his mother, Armelia Johnson, was a sharecropper. Around this time, many Blacks in America left the racist and generally under-served Deep South and migrated to the Midwest and West. Newton’s family settled in the San Francisco Bay area and lived primarily in the city of Oakland in California.

Newton had several run-ins with Oakland police as he engaged in petty crimes as a teen.

Later, Newton wrote in his autobiography that the schools taught him nothing and he graduated high school in 1959 while barely knowing how to read.

Still, Newton educated himself and eventually enrolled at Merritt College, where he reportedly supported himself by burglarizing homes.

While at Merritt, Newton studied law…allegedly to become a better criminal. He joined several organizations, including the Phi Beta Sigma fraternity and studied the works of Karl Marx, Malcolm X, Che Guevara, and Frantz Fanon, among others. 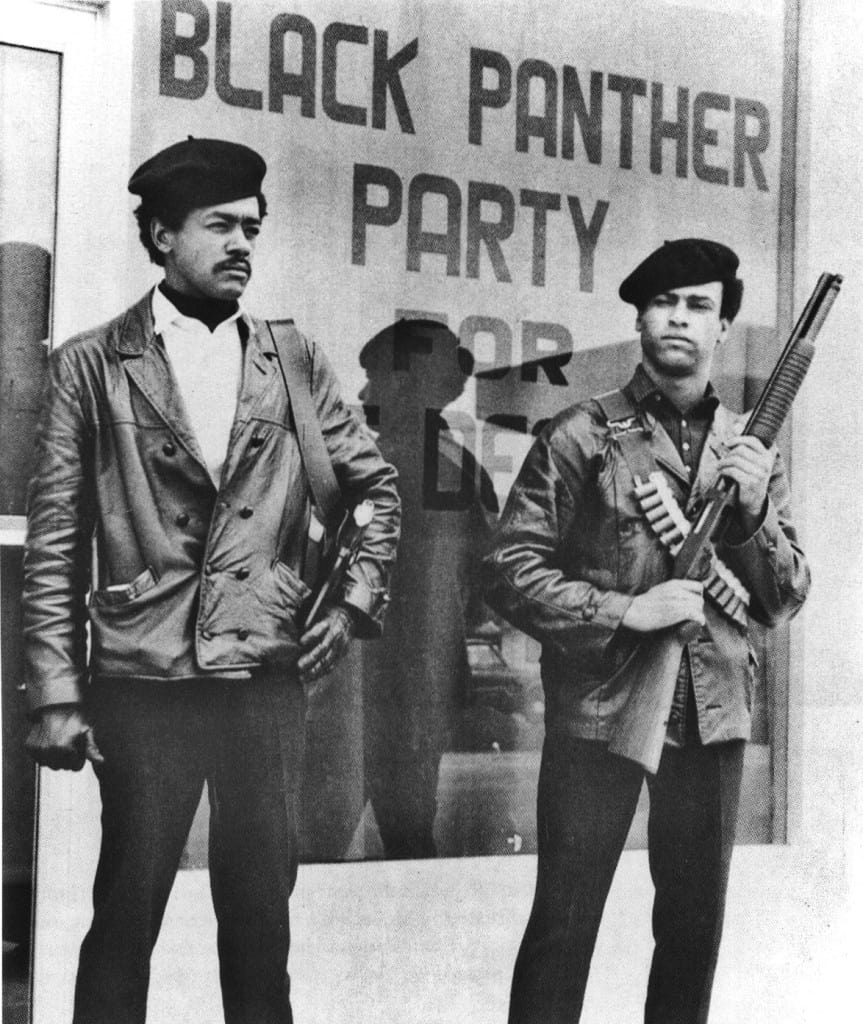 Newton and fellow student Bobby Seale (pictured left) formed the Black Panther Party for Self Defense in 1966, taking on a militant stance coupled with the burgeoning pride associated with the Black Power Movement.

The Panther Party became infamous for brandishing guns, challenging the authority of police officers, and embracing violence as a necessary by-product of revolution. The Panthers were not just about being menacing, however, as the group introduced a series of goals such as fighting for better housing, jobs and education for African-Americans. These plans were laid out in the Panther Party’s “Ten-Point Program.”

Newton embraced a concept he named “revolutionary humanism,” stating the Black nationalist group, The Nation of Islam, couldn’t satisfy his personal quest of understanding the social constructs of the world. Newton was not an atheist, as he embraced church later in his life.

Newton visited worldly environments where the Black Panther Party organized, recruiting young people in a bid to turn their criminal activity around into a positive force of change. The Panthers founded the Oakland Community School, which helped around 150 poor children receive quality education. The Panthers also provided free breakfast for poor children and also trained them in dance and martial arts.
The Black Panthers became a target of the FBI’s insidious COINTELPRO program, which sought to break apart many of the powerful civil rights and Black activist movements of the 1960s and 1970s. FBI director J. Edgar Hoover reportedly caused dissent and unrest between the Black Panthers and other Black nationalist groups.

In 1967, Newton allegedly shot and killed Oakland police officer John Frey during a routine stop. Originally facing two to 15 years for voluntary manslaughter, Newton endured two trials that ended in hung juries. A popular “Free Huey” campaign calling for the release of the leader became the phrase of the day and helped lead to his release.

By 1980, the Panthers were a former shadow of themselves. Much of what the group stood for had been rendered unrecognizable by bouts of infighting and a general shift in public perception of the group. There were also some Panthers who were allegedly involved in criminal activity, using the group to mask their intentions. Newton turned his focus to education, eventually earning a Ph. D from UC Santa Cruz.

In 1982, Newton was charged with stealing $600,000 of state funds that was supposed to go to the Oakland Community School. As the case went on, Newton disbanded the Black Panther Party. The charges were dropped six years later, and Newton took a plea deal.

It was rumored that Newton developed a drug problem around this time. A rival group, the Black Guerrilla Family, clashed with the Panthers over the decades. Tyrone Robinson, a member of the BGF and a local drug dealer, shot Newton twice in the face on August 22, 1989.

Although Newton’s life ended tragically, his rise from street criminal to revolutionary remains noteworthy along with his later academic pursuits.