Striking Kenyan doctors in Nairobi have been ordered back to work. The government directive was issued by Dr. Bernard Muia, the Nairobi County executive committee member in charge of Health.

Capital FM reports that during a chat with newsmen, Dr. Muia stated that the Nairobi County authorities and the Kenya Medical Practitioners and Dentists Union had met and worked together to find solutions to some of the issues raised by the doctors.

“The Nairobi City County Government on its part has fulfilled most of the demands by the doctors and this was confirmed by the meeting held on 9th September, 2016 and therefore there is no justification for the strike.

“As such, the County Government wishes to state and direct that the doctors’ strike is illegal. All the doctors are hereby required to report back on duty immediately failure to which disciplinary action shall be initiated against them. All doctors on leave are also hereby recalled back on duty with immediate effect.”

Dr. Bernard then appealed to doctors to consider their job as first of all a calling to save lives, urging them to put the value of human lives above all pecuniary motives.

“Doctors are reminded that their work falls within the definition of essential services and therefore resorting to industrial action by the doctors is unethical and illegal. Please be advised accordingly,” he said. 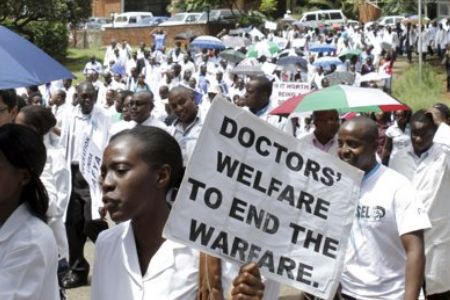 Earlier this month, Kenyan doctors began a silent protest to press for better working conditions. The striking doctors chose to participate in a silent protest, fearing possible backlash or victimization from authorities.

According to the Nation, the Secretary General of the Kenya Medical Practitioners and Dentists Union Ouma Olunga announced the action during a State House Summit on Health.

Dr. Olunga gave a list of the union’s demands to include the non-payment of salary arrears, delayed promotions, and the unconfirmed status of more than 128 doctors who are yet to be employed on a permanent basis.