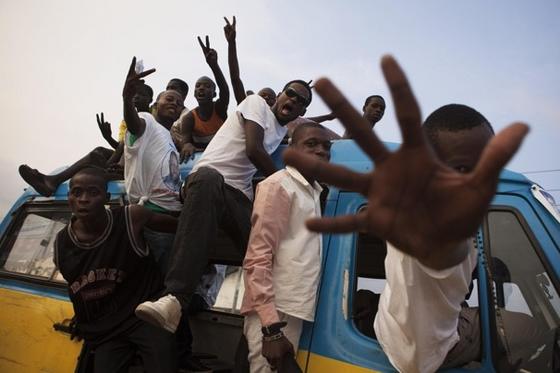 On November 28th 2011, over 20 millions voters in the Democratic Republic of Congo went to the polls to cast their vote for choosing who will be their next President for a five year mandate, as provided by the nation's constitution. Many among the voters hoped that Congo's second post war election would set the vast nation on the path to recovery after a period of prolonged crisis.

The Democratic Republic of Congo has the richest minerals filled soiled in the entire World. This country of Central Africa is the size of western Europe with more than 70 millions habitants. Since it's independence from Belgium in 1960, DRC has endured political and social turmoil.

Post-independence turmoil saw the rise of Colonel Mobutu Sese Seko who seized, and held onto, power for 32 years until he was deposed by Laurent Kabila's rebellion in 1997. The 1998 insurrection by rebels linked to Rwanda and Uganda triggered a war involving six other nations.The UN accused warring sides of prolonging the conflict as they continue to loot natural resources of the Congo for their own benefits.

A major investigation by the United Nations ( Mapping report) found that over 5.4 million people have died mainly due to war-related causes in Congo since the insurrection in 1998. This is major as it represents the world’s deadliest documented conflict since WW II. To this date in the Kivus, eastern region of DRC, violence continues to rage with Congolese women and girls suffering increasingly brutal attacks.

On December 8th 2011,the Independent National Electoral Commission, which is headed by an ally of incumbent President Joseph Kabila, announced that Kabila winner of the presidential election, with 49 percent of the vote. Etienne Tshisekedi his main rival who was given a score of 32% rejected the results and self proclaimed himself the nation’s President. The announcement of Kabila’s victory led to riots in Congo and major protest rallies of Congolese diaspora in major cities such as London, Paris, Brussels, Washington, Toronto and more. The Congoleses are calling for leaders of the international community to intervene urgently. The government has since banned SMS messages supposedly to preserve "public order" following disputed elections.

At the urging of the U.N. and the Catholic Church, on December 15th 2011, the opposition took their case for annulment of the results and a new election to the Congolese Supreme Court, even though Kabila, anticipating electoral disputes, appointed 18 new Supreme Court judges at the outset of the campaign season, increasing the number of judges on the court from nine to 27.

Kamerhe’s lawyers called the proceedings a “travesty of justice” and walked out of the courtroom before the end of the first day. On Saturday, Dec. 17, the court ruled that Kabila had won the election and was therefore the rightful president of the DRC. The East African presidents of Rwanda, Uganda, Burundi, Tanzania, Kenya and Sudan have already recognized Kabila, but Obama’s State Department has refused to say whether he will or not.

Nonetheless, there is overwhelming evidence that Joseph Kabila has perpetrated a massive hoax in order to retain power against the will of the people of DRC. Throughout the election process, Kabila and its government had complete control over the electoral process and has used fraudulent means to ensure a victory over the opposition. In certain districts of Congo, President Kabila's wins goes above or close to the maximum 100% of registered voters. In the capital of Kinshasa, an opposition stronghold, over 2,000 polling stations' results simply vanished. These facts and many more have been documented and published by many international human rights organizations such as Human Rights Watch and Carter Center Foundation.

For many Congoleses whether in the streets of Congo or among the large diaspora living abroad, Etienne Tshisekedi is the legitimate winner of this presidential election. Mr. Tshisekedi represents hope for a new Congo on its way to peace, recovery, stability under the foundation of human rights, justice, and equality for all. Contrary to Mr. Kabila, Mr. Tshisekedi has never made used of armed forces to gain power. He has always fought pacifically for decades under the dictatorship of former President Mobutu, Laurent Désiré Kabila, and today's Joseph Kabila. The People of Congo simply feel that their vote has been flagrantly stolen from them, and justice must run it's course to reestablished the truth about this election.