Howard Gayle, the first black man to play for Liverpool FC, has rejected the offer of a Member of the British Empire (MBE) award from the British crown.

Gayle, 58, says it would amount to a betrayal of all the Africans who have suffered injustice at the hands of the British Empire. The BBC is reporting that Gayle, who was born in Toxteth, Liverpool, said he had to decline the award in respect of his Show Racism the Red Card campaign work as his ancestors would be “turning in their graves.”

Gayle took to his Facebook page to explain his decision to reject the MBE award:

“Most of you who are on my FB page are aware of the work that I do tackling racism and the work I do for Show Racism A Red Card. And for that work yesterday I was nominated for a MBE, which unfortunately I had to decline the nomination for the reason that my ancestors would be turning in their graves after how Empire and Colonialism had enslaved them.” 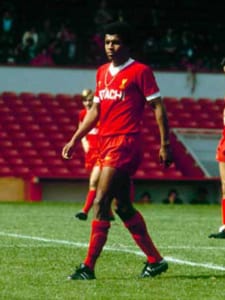 A Kick in the Grass

“This is a decision that I have had to make and there will be others who may feel different and would enjoy the attraction of being a Member of the British Empire and those 3 letters after their name, but I feel that It would be a betrayal to all of the Africans who have lost their lives, or who have suffered as a result of Empire.”

Gayle joined the Liverpool club as a budding youngster in 1974; he went on to sign a professional contract in 1977, becoming the first black footballer to officially don the iconic red jersey of the Kops. Gayle explains that his professional football contract was largely considered a “victory” by the black community in Liverpool at the time.

“It was constantly in the press that I was the first black player to play for Liverpool. It was a landmark as far as black people were concerned, and I was proud to represent the black community of Liverpool,” he said.

Gayle was a European Cup winner with Liverpool in 1981; he went on to have loan spells at Fulham FC and Newcastle United. He would later play for Birmingham City and West Ham United. He also featured for England at the under -21 level.