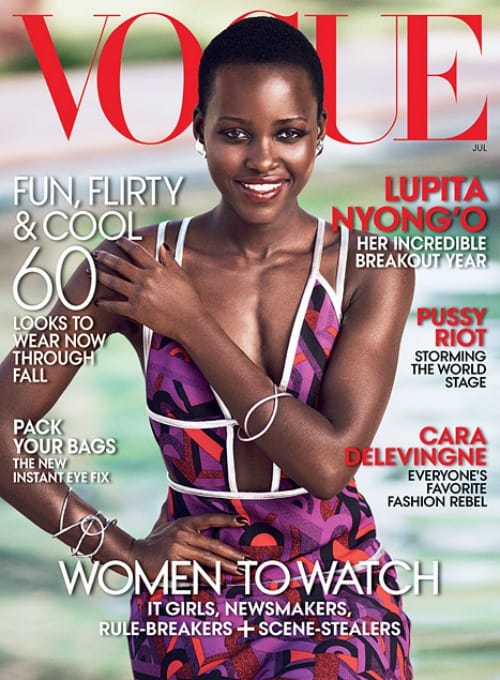 Iconic fashion magazine Vogue released their July magazine on Thursday, and guess who is on the cover? Award-winning Kenyan actress Lupita Nyong’o (pictured) of course!

On the cover, the 31-year-old starlet is wearing a form-fitting purple and red Prada dress from its fall 2014 collection.

In her feature, Nyong’o discusses her sharp rise to fame (“It just feels like the entertainment industry exploded into my life. People who seemed so distant all of a sudden were right in front of me and recognizing me—before I recognized them!”), designing her prom dress when she was in school (“It was a velvet miniskirt with a matching little top and an iridescent silver translucent fabric that flowed to the ground. It was kind of ridiculous, but it was fabulous at the time”), and seeing herself in “12 Years a Slave” for the first time (“I was really nervous about seeing myself in 12 Years a Slave, because it had been such a profound experience in all ways. I remember it being one of the most joyful times in my life—and also one of the most sorrowful. I didn’t want my experience to be a vain one. But I will say that when I watched it, my heartstrings were pulled so tight for ‘Solomon’ that I couldn’t go into the ego trip. I cried—I mean, I was inconsolable. I wept for an hour after the movie”).

Since winning an Oscar for “12 Years,” Lupita has earned a number of roles and distinctions.

Earlier this month, it was announced that Nyong’o will both produce and star in Chimamanda Adichie‘s book-based film “Americanah.” Also this month, the news hit that she nabbed a role in the uberly popular “Star Wars” series.

She is also joining fellow actor Idris Elba in Disney’s “Jungle Book,” and yet these accomplishments don’t include her distinctions as People Magazine’s “Most Beautiful” and Lancome’s first Black brand ambassador.