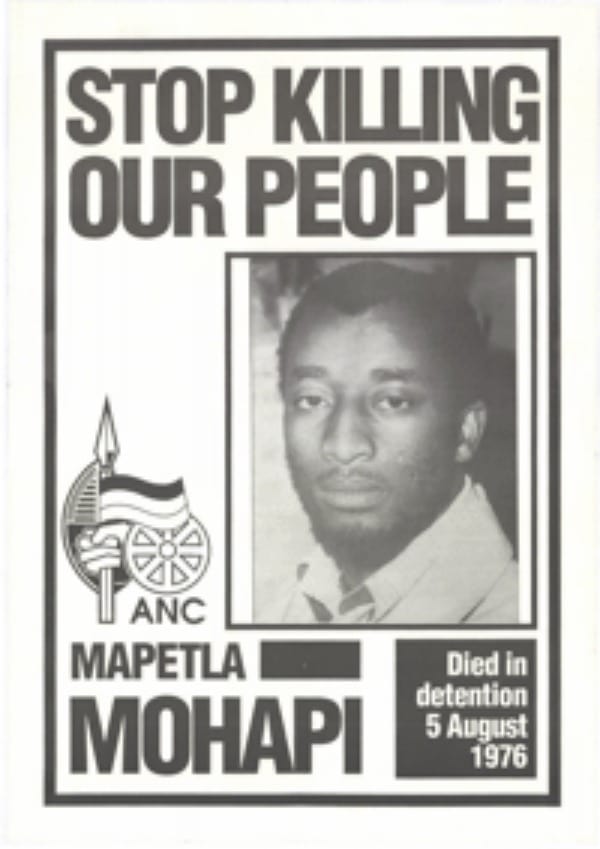 Mapetla Mohapi (pictured) was a member of the anti-apartheid Black Consciousness Movement (BCM) in South Africa in the 1970s. As one of the BCM’s early leaders alongside Steve Biko, Mohapi was a vocal proponent in eliminating the racial segregation in his country. On this day, he was found mysteriously hanged in his cell with some alleging he was killed by the authorities.

SEE ALSO: African Leaders Impose Sanctions Against Burundi On This Day in 1996

Mohapi was born September 2, 1947, later graduating from the University of the North in the early 1970s with a degree in Social Work. While a student, he involved himself in the burgeoning BCM activities and became aligned with the South African Students’ Organisation (SASO). Mohapi’s first arrest while with SASO occurred in October 1974 for supporting the Mozambique Liberation Front (FRELIMO) at a rally.

Serving as SASO’s permanent Secretary, Mohapi also worked in support of ex-political prisoners and their families. Because of his activities, Mohapi became an even larger target of the South African government and endured other arrests.

On July 16, 1976, Mohapi was arrested under the Terrorism Act for the last time — later dying in his cell. Mohapi was found with a pair of jeans tied around his neck, which hung from the bars in the cell. Police produced a suicide note which read, “This is just to say goodbye to you. You can carry on interrogating my dead body. Perhaps you will get what you want from it. Your friend, Mapetla.”

Mohapi’s wife, Nohle, sued the Police Minister with claims that the authorities staged the death. A hired handwriting expert determined that Mohapi’s signature was forged but no charges were filed. A mild hope for justice came just under 20 years later when Nohle Mohapi was the first person to testify before the Truth and Reconciliation Commission (TRC) on April 15, 1996. Mrs. Mohapi wanted the TRC to investigate the earlier findings in the death of her husband.

In June 2004, Mohapi was posthumously awarded The Order of Luthuli in Silver by the South African Government. The award came for Mohapi “dedicating his life to the struggle for a democratic, free, and non-racial South Africa.”

There is also a memorial in Sterkspruit, where Mohapi was born.