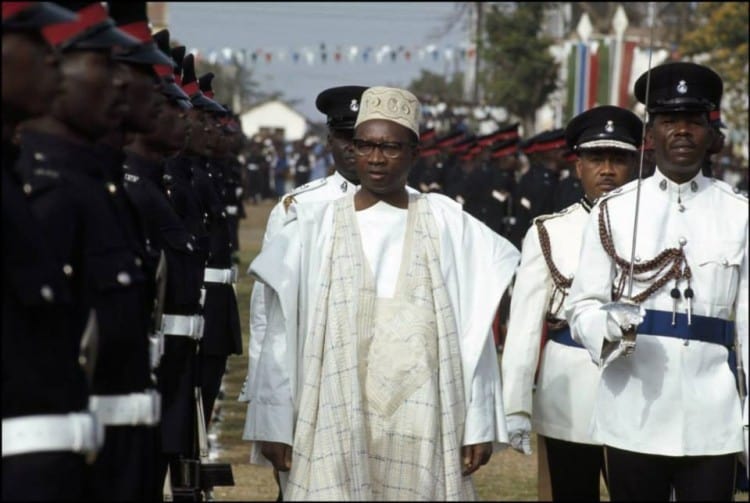 Gambian President Dawda Kairaba Jawara (pictured) endured criticism and the like from the people he presided over, all while trying to stabilize the Gambia’s economical standings amid claims of corruption. On this day in 1981, President Jawara was temporarily deposed in a coup by the leader of an opposing group.

SEE ALSO: P.W. Botha Threatened Exile Of Blacks In South Africa On This Day in 1985

The coup occurred as President Jawara was away in London for the wedding of Prince Charles. The Gambia was a former colony of Britain, and the President kept close ties with the country. The morning of July 30th, the Gambia was rocked when Kukoi Samba Sanyang led the 12-member National Revolutionary Council (NRC) to seize the Gambia, accusing President Jawara and his cabinet of being corrupt.

There are also reports that Gibril Pengu George and the Gambia Underground Socialist Revolutionary Workers Party originally concocted the plot of the coup but allowed Sanyang to carry out the orders. Either way, Sanyang and the 11 men raided the weapons depot of the “Field Force” military group and began handing out rifles to those who rallied around their cause. In fact, an analysis by Arnold Hughes revealed that the group handed out weapons to anyone with a voter’s card. The situation became unruly and turned into an all-out riot, where looting, robbing, and killing rocked districts within the Gambia throughout the day.

President Jawara’s wife, Lady Chilel Jawara, and eight of their children were among the more than 100 hostages being held at the Field Force Depot.

Sanyang, who had become emboldened, declared that he would be running a “Marxist-Leninist” state over the seized state-run radio airwaves. Sanyang hoped to galvanize Gambians to convince Senegalese natives in the country to denounce President Jawara’s rule.

The next day, President Jawara was close to surrender but flew to Senegal’s capital city, Dakar. Enlisting help from the Senegalese military, 400 troops from the country quickly took to the ground. The Gambia’s capital city, Banjul, was under siege, but the Senegalese soldiers were able to recapture the region and beat back Sanyang’s rebellion by August 5th.

President Jawara’s ties with Senegal were strengthened after this incident, although it would not keep him in power. On July 22, 1994, he was ousted in a coup by army Lieutenant Yahya Jammeh, who is the current president of the Gambia.