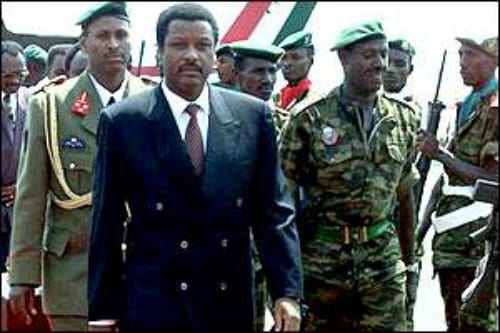 In response to a military coup in Burundi, African leaders banded together to impose economic sanctions upon the troubled nation on this day in 1996. Officials who led the fragmented country didn’t take the threats of the sanctions seriously, but serious implications still loomed.

The leaders were not clear on how the sanctions would be carried out, but a military spokesperson said that the coup was necessary to end the clashes between the Hutu and Tutsi. Maj. Pierre Buyoya (pictured) came to rule Burundi, after he and a large armed group led the coup on July 25th that ousted the failing government of then-President Sylvestre Ntibantunganya.

Ntibantunganya’s inability to end the bloodshed of civil war in the nation was part of the reason Buyoya led the coup. Buyoya, who is Tutsi, chose a Hutu, Pascal Fermin Ndimira, as Prime Minister.

In a summit, leaders from Ethiopia, Kenya, Cameroon, Uganda, Tanzania, Rwanda, and Zaire all joined together to enforce the economic sanctions. The group of leaders also wanted Buyoya to bring forth a parliament and allow political parties to form.

The leaders, who met under the organization of the Organization of African Unity, wanted to make certain that the Hutus, the majority ethnic group, were able to share power within the new government.

Burundi’s chief exports at the time were coffee and tea, which had already been crippled due to the war. Officials hinted that oil imports were going to be lowered to basic levels and connections to major airports would be cut.

According to various reports, the United States offered to help with logistics for a possible international force to enter Burundi, chiefly its capital, Bujumbura; Buyoya’s good faith appointment of a Hutu left members of the group largely unimpressed by the gesture.

The sanctions and talks of intervention eased, though, as President Buyoya elected Domitien Ndayizeye, a Hutu, vice president and maintained an ethnically diverse government. Ndayizeye eventually became president when Buyoya handed over power in a government agreement.

SEE ALSO: P.W. Botha Threatened Exile Of Blacks In South Africa On This Day in 1985