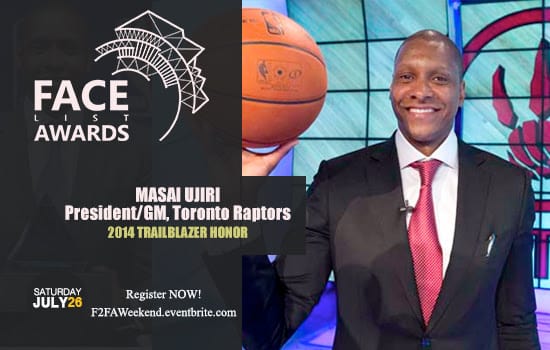 Sitting in the lounge of the Trump Soho Hotel in New York City, waiting for Masai Ujiri (pictured) to arrive for an interview, was a surreal experience. A dizzying constellation of stars swirled around and through the lounge: WWE wrestler John Cena was mobbed by dozens of rabid teenagers, NBA all-star Russell Westbrook exited a Lincoln Navigator SUV with the oversized angularity of an adult exiting a child’s play car, and mercurial soccer striker Zlatan Ibrahimovic nonchalantly ambled through the lounge with his wife and kids. It was in to this rarefied environ that Mr. Ujiri would stride shortly thereafter, with a preternatural confidence that signaled that he belonged there among the stars.

I begin with this anecdote because, in order to understand Mr. Ujiri, one has to understand his journey. Mr. Ujiri is the President and General Manager of the NBA’s Toronto Raptors team. In plainspeak, he calls the shots. He is one of a handful of the most-influential voices in the NBA and remains the only African to hold such a lofty position in an American sports league. 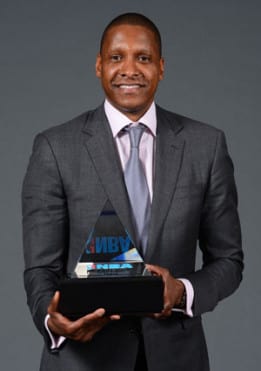 What makes Mr. Ujiri’s journey so surprising and inspiring is where his journey began: Born to a Kenyan Mother and a Nigerian Father, Mr. Ujiri grew up in northern Nigeria. As with most children on the African continent, his first pastime was soccer, but at the age of 13, he and his friends were introduced to the game of basketball. On their daily pilgrimage to the soccer field where they played, young Masai and his friends would pass by basketball hoops, where they would shoot their soccer balls. One day, they saw another group of young people playing on the courts with a real basketball and young Masai, and his friends joined in.

And the rest, as they say, is history: what began as a brief distraction grew to become a lifelong passion for basketball.

Mr. Ujiri’s career in basketball operations began in 2002, when he became a scout for the Orlando Magic, followed by stints as a scout for the Denver Nuggets and Toronto Raptors.

Mr. Ujiri himself attributes his meteoric rise through the NBA managerial ranks as consequence of hard work, honesty, passion, and taking advantage of the opportunities that were presented to him, “I went in with a lot of passion. I believe in showing more passion than ambition. I just showed passion for scouting and putting a team together, and it just so happened that I continued to grow and just grabbed the opportunities with the teams and the good GMs and great owners that I worked for who believed in me.”

Mr. Ujiri attributes much of this to the upbringing he was given by his father and Nelson Mandela, as his most-important role model, “My dad was my Nelson Mandela,” he added, “just a humble man that worked hard, believed in himself, believed in his children and family, and made us believe in ourselves. My dad would always sit me down, and he would always say, be good to people, be honest, work hard, and always be good to people.” 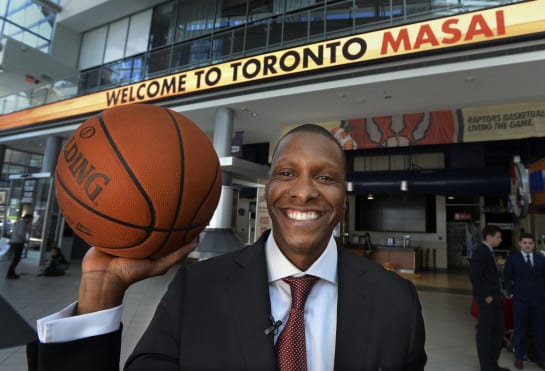 Notwithstanding the vast canyon of wealth, status, and influence between the exospheric Trump Soho world what he now so effortlessly inhabits and the Africa of his youth, Mr. Ujiri still preserves a palpable humility and a deep-seated love of Africa and its people.

Describing Africa as “the beginning and the end of the world,” Mr. Ujiri created Giants of Africa in order to tap the youth and ensure that the next generation has more African-born players, managers, and executives like himself in the NBA.

With Giants of Africa, his goal is to ensure that the next generation’s Masai Ujiris, Dikembe Mutombos, Hakeem Olajuwons, and Joel Embiids do not lack the fundamental developmental tools and infrastructure, i.e., sneakers, courts, knowledgeable coaches. And ultimately, he wants youth to utilize basketball as a tool for societal empowerment.

He also believes that with the right foundation, there is a vast untapped pool of basketball talent in both the athletic and managerial sides of the game in Africa, “There are more coming up, there are more younger GMs, there are more players, there are so much who can grow; I just believe in the youth of Africa.” 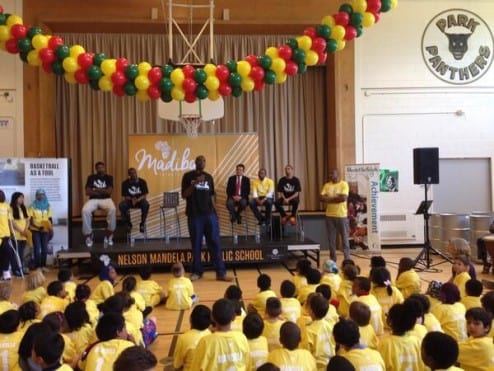 The most-striking characteristic about Mr. Ujiri is not his considerable height, his brimming confidence, or his magnetic smile, but his genuine humility. Whenever he described any of his accomplishments, Mr. Ujiri never failed to describe them as “blessings” and never failed to credit those around him for making his success possible.

Through both his own hard work and his support system, Mr. Ujiri’s journey has truly been that of a trailblazer and a trendsetter, and for that, we at Face2Face Africa salute him.

Join us on July 26 in New York City as we honor Mr. Ujiri with the Trailblazer award.

Congratulatory Believers: Become a Believer and congratulate your favorite honoree in the program magazine: https://f2fabeliever.eventbrite.com

Media Partnership: Media accreditation is required to cover all pan-African Weekend events. To RSVP or to become a Media Partner, please contact Gelila Getaneh at ggetaneh@f2fafrica.com or call 888-505-1299.

Supporting Organizations: Organizations interested in supporting the pan-African Weekend can register to become Supporters. Supporting organizations will enjoy a range of amazing benefits. Contact Gelila Getaneh to register and for more details.