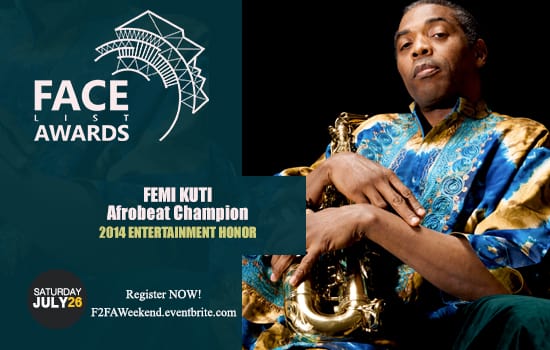 Through his exquisite and talented musicianship, Femi Kuti has rewritten the rulebook of pan-African music. By fusing musical elements from all over the continent of Africa, and all over the world, his constantly evolving sound has broadened the minds and ears of audiences everywhere as to the limitless power of music to unite and inspire. He has built a musical legacy that is an extension of his father, Fela Kuti, whose unrivaled legacy still stands on its own as innovative and inspiring. A four-time Grammy award nominee, Femi Kuti’s music and mission is universal but indelibly pan-African, painting a forward-looking picture of an Africa that is united and free from political and economic corruption.

SEE ALSO: AFRICAN PIONEERS IN BUSINESS, FASHION, HEALTH, AND ENTERTAINMENT CONFIRMED TO BE HONORED AT #F2FAWEEKEND NYC THIS JULY

“The apple doesn’t fall far from the tree” may be an American idiom, but it embodies an idea that transcends language and culture. Every cultural tradition has a proverb or maxim that underscores the gravitational relationship between parents, especially those of renown, and their children. Some see this relationship as a bequest to be embraced and strive to emulate their parents legacy as closely as possible. Others see this relationship as a burden to be shed and seek to rebel against every trace of the the legacy of their progenitors. 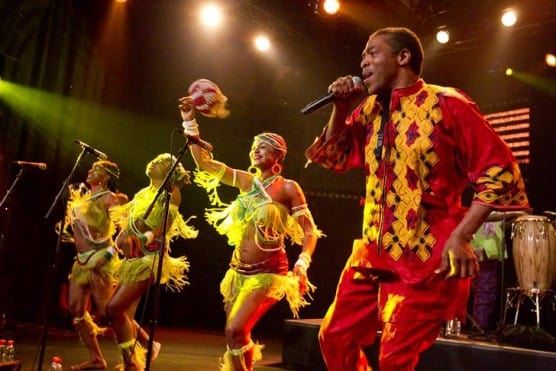 But, what does one do when his father’s legacy is so vast and so dense that is casts a shadow that reaches in to every corner and cranny of their chosen field? If you are Femi Kuti, you choose a middle path, embracing your father’s legacy and then using it to forge new paths that are undeniably original, forming your own inimitably unique legacy.

To understand Femi Kuti, you must understand Fela Kuti. If your mind has never awoken one morning on a pillow woven from the silky horns of “Trouble Sleep Yanga Wake Am,” then you 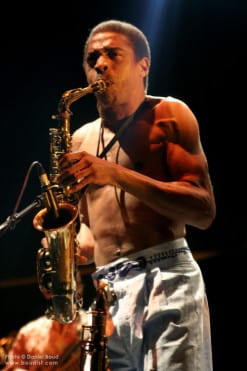 have been sleepwalking your entire life. If you have woken up to find your mind swimming blissfully atop the crests of Fela’s saxophone, though, then you can begin to understand the breadth of the shadow that Fela casts over Afrobeat music.

Fela is the ruler by which every Afrobeat musician is measured and the cup by which he or she is weighed. He is a planetary core that is somehow larger than the planet within which he nominally exits. Starting in 1972 and extending for the next 15 years, Fela was African music and African music was Fela. His music was simultaneously deeply personal and avowedly political. He was Bob Dylan, John Coltrane, and Malcolm X rolled into one being.

Femi injected a youthful millennial energy in to the rhythms that his father had originated. While Fela’s song’s were long wandering sojourns, Femi’s song’s were short incisive jaunts. While Fela’s rhythms slowed your heart down and kicked your brain in to action, Femi’s rhythms get your heart beating and your hips moving. While Fela’s music was at heart the insular expressions of one man’s personal passions and his protest against a corrupt sociopolitical system, Femi’s music is a more extroverted expression of these same passions and sociopolitical protests but embraces the collaboration with like-minded artists the world over.

While embracing his father’s legacy, Femi has still managed to achieve greatness on his own terms and by his own definition. In a way, this is in itself the best expression of Fela’s legacy. Fela never allowed himself to be fit within predefined roles or stereotypes. He embraced Nigeria while protesting against its corrupt and rotten politicians. He embraced the traditions of the African highlife music that preceded him but combined them with funk, jazz, and rock to create Afrobeat.

And in that same way, Femi has embraced the musical legacy of his father, while making it his own. The apple truly doesn’t fall far from the tree.

Join Face2Face Africa as we honor Femi Kuti with the Entertainment Award on July 26th at the Skirball Center in New York for furthering his father’s legacy and bringing a unique vision of Africa to the world through his music. Click here to register.

Congratulatory Believers: Become a Believer and congratulate your favorite honoree in the program magazine: https://f2fabeliever.eventbrite.com

Media Partnership: Media accreditation is required to cover all pan-African Weekend events. To RSVP or to become a Media Partner, please contact Gelila Getaneh at ggetaneh@f2fafrica.com or call 888-505-1299.

Supporting Organizations: Organizations interested in supporting the pan-African Weekend can register to become Supporters. Supporting organizations will enjoy a range of amazing benefits. Contact Gelila Getaneh to register and for more details.