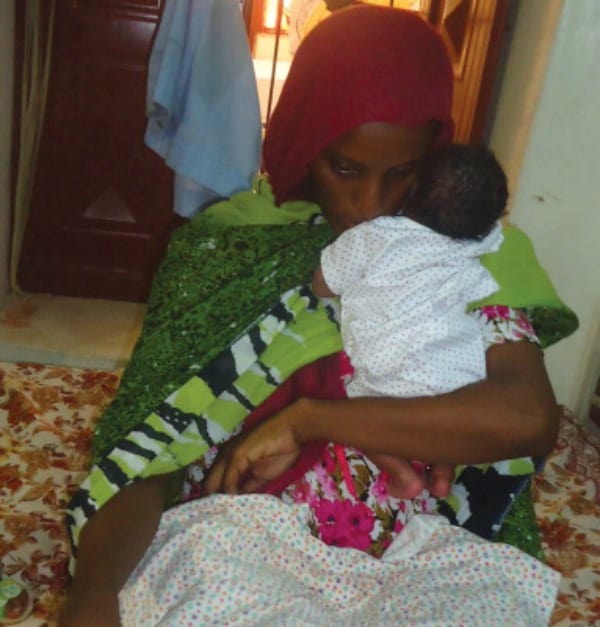 Meriam Yehya Ibrahim Ishag (pictured), the Sudanese woman sentenced to death and jailed for rejecting Islam, revealed that the daughter she gave birth to while in prison may have been born with physical defects, due to the physical restrictions placed on her while in labor.

RELATED: UPDATE: Sudan Re-Releases Mother Who Was on Death Row

Ishag spoke via phone to CNN about her harrowing ordeal, which is the first interview she’s granted since being released from prison last week and detained once more trying to leave the country with her family.

The 27-year-old said she gave birth while chained to the prison floor and couldn’t open her legs.

Now accused of providing false travel documents, Ishag is staying in an unknown safe house in Sudan’s capital, Khartoum, as she considers her next move. But of greater concern is the well-being of her infant daughter.

Asked how she felt in prison, refused access to a hospital as the birth of her child neared, Ibrahim [Ishag] said, “I was only thinking about my children and how I was going to give birth. I was mostly scared of giving birth in prison.”

The 27-year-old had reason to be alarmed.

“I gave birth chained. Not cuffs but chains on my legs. I couldn’t open my legs so the women had to lift me off the table. I wasn’t attached to the table,” she said.

Doctors fear that the circumstances of the baby’s birth may have lasting consequences.

“I don’t know in the future whether she’ll need support to walk or not,” said Ibrahim.

Ishag’s husband, Daniel Wani, who is an American of South Sudanese descent, and his wife were released from custody last Thursday, after being detained two days prior while attempting to leave Sudan for the United States with their toddler son and daughter. The release was conditional, though, as she had to agree to not leave the country if she wanted freedom.

Of her release, Ishag says, “I can’t even decide what I should do right now. I want to travel but at the same time I don’t want to travel. But the state I’m in right now means that I’m forced to. There’s a new problem every day about me leaving.”

Ishag denies any wrongdoing in the false document charges, stating that her paperwork was approved by the South Sudan and American ambassadors.

At root, Ishag’s refusal to accept Islam as her religion and her marriage to Wani, a Christian, has sparked the ire of Sudanese officials. Sudan practices strict Islamic, also known as Sharia, law and claims that because Ishag’s father was Muslim, she, too, must follow the faith, according to law and tradition.

Ishag has repeatedly appealed to Sudanese officials, saying she was raised and identifies as Christian.