Coffins are slowly becoming overrated with the creation of ingenious ways to bury the dead. As Muslims bury their dead without coffins, others are opting for cremation which leaves no mark of life but ashes.

The final nail in the coffin is the burial of the dead in cars which a Nigerian man, only named as Azubuike, allegedly pulled off recently to bid his father a luxurious farewell.

Photographs of a burial ceremony purported to be in Anambra State in Nigeria showing the deceased being lowered into a grave in a BMW has been trending online with a lot of comments condemning the act.

It’s been widely reported by Nigerian websites that the new car is worth over 32 million Naira ($90,000) and the deceased’s son decided to use the BMW as a coffin to “hand him a dignified send-off befitting of his status”.

Social media users were questioning the motive for the decision to bury the dead in a new car. One Twitter user described it as reckless while another thought it was bizarre.

Will you ever spend good money so reckless like this.
Using a BMW as a coffin?

Nigerian son buries his father in a brand new BMW

The deceased was put six feet under in a brand new BMW, used as a replacement for a coffin. Nigerians do some bizzare things and the rest of the world has… https://t.co/B8OMyFpjsY

Many comments showed the lack of interest for the lavish gesture which isn’t the first time it has ever happened.

Three years ago, an unnamed Nigerian billionaire in Enugu was reported to have buried his mother in a customized brand new Hummer SUV vehicle. 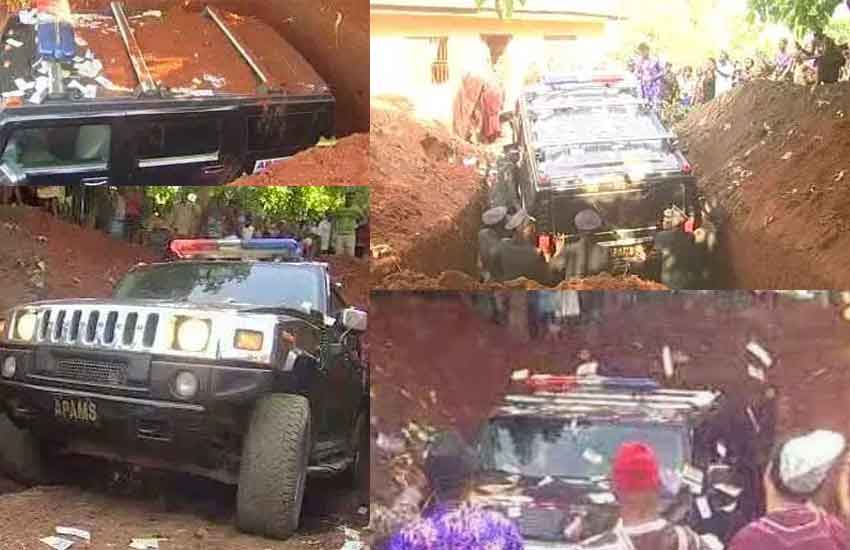 Here are some social media reactions to the burial.

If People can dug out a coffin for reselling what more a BMW, this was just a mere/kind donation to the few youths in Nigeria

It may be class, it may be stupidity or too much money but I think I know is that it will take lots of security and extra money to keep the said in-law in the BMW for a considerable amount of time.
??.
Hope there is a coffin in the car else in-law may eventually go Solo.