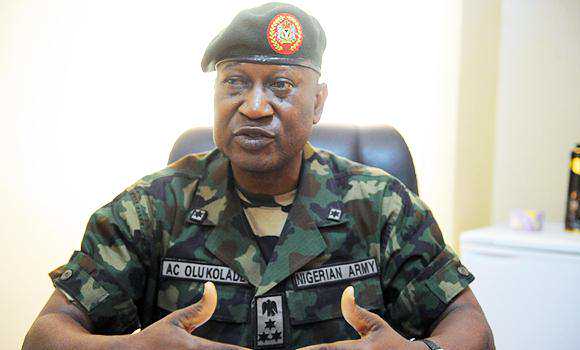 After shooting at their commander Major-General Ahmed Mohammed (pictured), 12 soldiers have been sentenced to death for mutiny by a nine-member military tribunal in Nigeria, according to the BBC.

In May, Face2Face Africa reported on the incident of soldiers from Nigeria’s Seventh Division firing shots at Maj-Gen Mohammed out of frustration for having inferior arms, which they reportedly believed had led to the senseless deaths of their peers in an earlier battle.

In other news, soldiers frustrated with the reported lack of sufficient arms to fight insurgents, reportedly fired on their own commander’s, Maj-Gen Ahmed Mohammed, car in Maiduguri, the capital of Borno State. The soldiers were reportedly protesting the men they lost in yet another Boko Haram ambush on Tuesday without adequate resources.

In later reports, witnesses added that the soldiers also threw rocks at the commander.

Witnesses said the soldiers lost discipline and threw stones at the officer when he arrived at their camp, and shots were fired into the air.

General Amadu Mohammed had to take cover as they aimed their guns at him – firing bullet-holes in his armour-plated staff car – but he was not injured.

According to Court President Chukwuemeka Okonkwo, the military tribunal took the soldiers’ actions very seriously, especially in the face of the ever-present threat of Boko Haram, “[The sentencing panel took into account the] likely effect on counter-insurgency operations [of the incident as well as its] implications on national security.”

Another five soldiers were acquitted during the trail, but one other soldier was reportedly convicted on another count.

But these soldiers aren’t the only ones to mutiny in recent months due to poor equipment and inferior arms.

About two weeks ago, an unnamed soldier spoke with the press, saying that both he and about 40 other soldiers would not be fighting until they receive better resources.

Of the soldiers’ situation, the unnamed soldier reportedly said that with the lack of firearms and appropriate resources, soldiers are just being sent off to die, “Soldiers are dying like fowl,” he said.

The soldier says that there are at least 40 more reportedly stationed just outside Maiduguri who have decided not to fight. He added, “The Nigerian army is not ready to fight Boko Haram. Boko Haram are inside the bush, everywhere,” he said. “They [senior commanders] are sacrificing soldiers.”

While there have been no reports of increased weaponry or updated equipment, the Nigerian military did make headlines days ago for finally routing out Boko Haram in Konduga last Friday, reportedly slaughtering hundreds. Understandably, the win was said to improve morale.