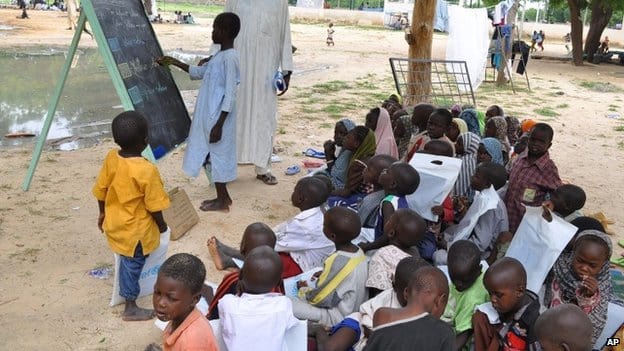 Many civilians have fled to Maiduguri for safety.

For weeks, civilians in the northeastern Nigeria have anticipated the worst: the invasion of Maiduguri by Boko Haram. On Thursday morning, the traditional elders of Borno Elders Forum (BEF) announced that the capital of Borno State was indeed completely surrounded by the terrorists, presenting an ominous foreshadowing of what’s to come.

When Boko Haram was originally established in 2002, they focused on rejecting Western education and engaging in “hit-and-run attacks.” In the past few months, though, the group has stepped up its offensive, holding on to 10 towns and declaring an Islamic caliphate.

Boko Haram has been gaining control of northeastern Nigeria at an unprecedented pace. In addition to Bama, they also reportedly have control of Gwoza, Madagali, Dikwa, Ngala, Marte, Damboa, and Buni Yadi.

But since last week, Boko Haram was able to add towns Gulak and Michika this past Sunday to their ever-growing caliphate, making themselves the “biggest threat to Nigeria’s territorial integrity since 1967-70 civil war.”

After they took over Bama, Borno State Senator Ahmed Zanna echoed concerns that Maiduguri was next.

Zanna expressed his fears that Boko Haram would be looking to take over Maiduguri next, calling that impending takeover “catastrophic.” Maiduguri has a population of more than 2 million.

Therefore, he plead for the government to send the necessary resources to ensure Maiduguri doesn’t fall too.

“I’m begging the government to send more troops and armoury to Maiduguri,” he said.

And by Thursday morning, those worries seem to be realized, with the BEF saying that the Nigerian military needs to “urgently fortify” the city, “The insurgents have surrounded Maiduguri and are nursing the ambition of attacking the city from all directions.“

As the capital of Borno state, Maiduguri houses many civil servants, people of note, as well as former government ministers, and in recent months, it has also come to serve as a refuge for many who have fled Boko Haram’s terror.

That is why it is particularly disturbing that at this 11th hour, the government has still not been able to secure the area, causing BEF to add:

“We are convinced that the Federal Government of Nigeria has not shown sufficient political will to fight Boko Haram and rescue us from the clutches of the insurgents which may ultimately lead to the total annihilation of the inhabitants of Borno,” BEF said.

“The insurgents have rendered impassable almost all the roads leading to Maiduguri.”

It seems that Boko Haram is poised to take over the capital as well.