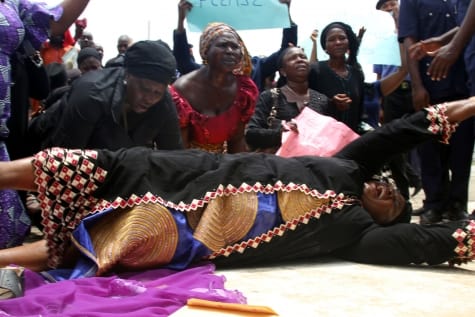 The Mothers of the missing Government Secondary School (GSS) students in Chibok, located in Borno State, Nigeria, staged a protest, calling for their daughters to be brought home, reports Sahara Reporters.

RELATED: Number of Nigerian Schoolgirls Missing Increases, Parents Give Up Search Due to No Help

At the protest, senators Barnabas Gemade and Helen Esuene reportedly told the women, who mostly belong to the Kibaku Development Association, that they are “considering a motion” regarding the stolen girls.

Not surprisingly, their response failed to satisfy the understandably desperate parents.

In reaction, some Mothers reportedly threw themselves down to the ground in despair, crying out for their missing children. The situation for the girls recently became exacerbated with reports indicating that the girls are being forced in to mass marriages and then being sold for 2,000 naira or $12 USD each to Boko Haram leaders near the borders of Cameroon and Chad.

[A] girl’s father fainted, the Guardian reported, and has since been hospitalized. But the news got worse. Village elder Pogo Bitrus told Agence France Presse locals had consulted with “various sources” in the nation’s forested northeast. “From the information we received yesterday from Cameroonian border towns our abducted girls were taken… into Chad and Cameroon,” he said, adding that each girl was sold as a bride to Islamist militants for 2,000 naira — $12.

On April 14th, it was originally reported that more than 100 students were abducted from GSS, with Borno Provincial Governor Spokesman Isa Umar Gusau informing the public that most of the girls had escaped and returned home. Borno Governor Kashim Shettima immediately spoke out — countering Gusau — that only 14 girls had escaped and the rest were still being held hostage, effectively elevating the confusion.

Soon after, Gusau would release another statement conceding that his figures were wrong, but the chaos would only escalate once it was discovered — nearly two weeks later — that the number of girls missing was actually double what was initially reported.

Meanwhile, heartbroken parents — and missing students — seemed to have been neglected by the government and local officials. Consequently, many parents decided to look for their children themselves. All of the parents involved in the searches would be forced to return home due to a lack of firearms and muscle needed to retrieve their most-prized possessions.

If you want to help in the effort of returning the GGS girls back home, you can sign this Change.org petition.

RELATED: Anxious Parents Go in to Forest in Search of Stolen Daughters