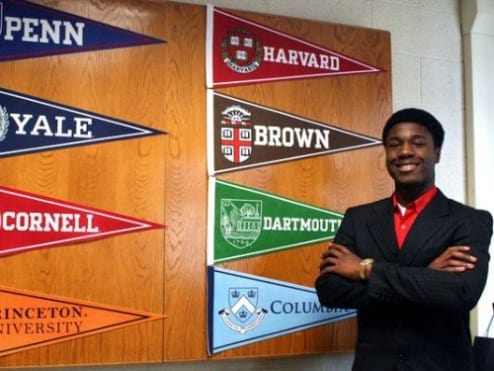 Kwasi Enin (pictured), who recently made headlines for getting in to all the Ivy League schools in the United States, has reportedly chosen to attend Yale University, according to ABC News.

As Face2Face Africa previously reported, Enin was accepted in to the top universities:

Born to Ebenezer and Doreen Enin, who came to New York in the 1980s to complete their studies as nurses, Kwasi, who also has a younger sister, Adwoa, was indeed accepted in to all eight Ivy League universities, which includes Brown University, Columbia University, Cornell University, Dartmouth College, Harvard University, Princeton University, the University of Pennsylvania, and Yale University.

Enin told the media that while he had initially hoped he’d get in to one or two of the Ivy League schools, he never imagined that he would actually get in to all of them, “I simply thought I would apply to all eight,” he said. “I knew it was crazy, but I hoped I would get one or two. But they all came, and I said there was no way.”

Afterward, Enin said that he would base his final selection on the amount of money each school offered for his education.

And with 17-year-old Enin selecting Yale University, which was his favorite to begin with, it is clear that Yale must have given the best offer.

Enin, who plays sports and the viola, earned a SAT score of 2,250 out of 2,400 points, placing him the 99th percentile for African-American students.

The stellar student isn’t the first in his family to be accepted to an Ivy League school. In fact, several of his uncles and cousins have also reportedly been accepted to the storied institutions.

Enin is the first to get in to all of them at the same time, though.

As for Enin’s teachers, they say they aren’t surprised by his success, calling him an “ideal” student.

SEE ALSO: Somali Teen Stowed Away In Plane Because He Was Homesick, Missed Mother