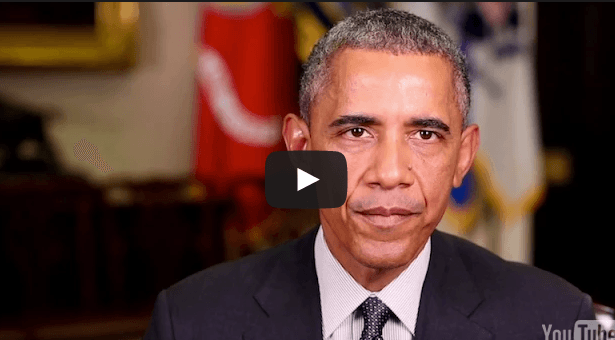 With Nigeria’s elections just five days away on March 28th, U.S. President Barack Obama (pictured) decided to release a message directly to the nation’s citizens to encourage voting and a “peaceful” democratic process on Monday.

In his videotaped message, President Obama lauds the many accomplishments of both the republic and its people and focuses on reiterating what a “credible” election looks like.

“For elections to be credible, they must be free, fair, and credible,” he says. “All Nigerians must be able to cast their votes without intimidation or fear.”

President Obama then speaks directly to the presidential candidates, insisting that they hold he line by rejecting violence and embracing peace.

“I call on all leaders and their supporters to make it clear that violence has no place in democratic elections.

“And that they will not incite or engage in any type of violence before, during, or after the votes are counted.”

It is well-known that while Nigeria has been heralded for pushing South Africa to second place as the biggest economy of the continent, Boko Haram headlines have seemingly eclipsed that success with murders and territory take-overs throughout 2014 and 2015.

The United States’ Commander-in-Chief spoke to this ongoing threat, promulgating that each Nigerian who casts a ballot is helping to secure their country against the militants, “Boko Haram wants to destroy Nigeria and all that you have built. By casting your ballot, you can help secure your nation’s progress.”

Nigeria’s general elections were originally supposed to take place on February 14th but were postponed by incumbent President Goodluck Jonathan‘s inability to secure the northeast region against Boko Haram, which would affect the number of citizens able to vote.

Critics of the postponement said that President Jonathan used Boko Haram as an excuse to hold on to power since it appears that he could lose to former military head of state and political opponent Gen. Muhammadu Buhari.