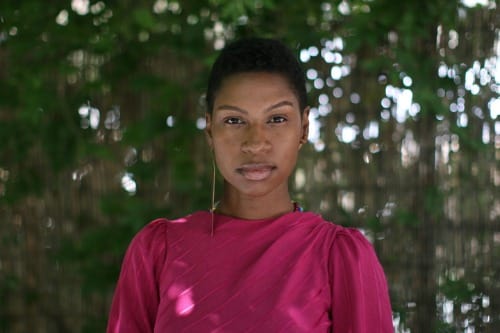 This week, experts from around the world will convene in Geneva for the 14th session of the United Nations Working Group on People of African Descent. Formed in response to the World Conference Against Racism and Related Intolerance held in Durban, South Africa, in 2001, the group’s mandate covers a range of issues, including justice, the media, access to education, employment, health, and housing vis-à-vis people of African descent. Considering the recent– albeit flawed– effort by the African Union to have a diaspora-wide conversation within an institutional framework , the timing of this event couldn’t be better.

In 2011, the working group launched a fellowship to be awarded annually in the context of the International Year for People of African Descent. The idea is to reward people working on diaspora-focused work while bringing new blood in to the global community of experts. Brooklyn-based curator, writer, and multimedia artist Shantrelle Patrice Lewis (pictured) is bringing her unique perspective to the big wigs at the UN. Face2Face Africa had the chance to speak with her just after she arrived in Geneva.

F2F Africa: How did you find out about the fellowship?

Shantrelle Patrice Lewis: Last year, I was invited to participate in the 45th Anniversary of the Congress of Black Writers and Artists. Immediately upon arrival, I bonded with a group of Afro-Canadian women who were from various parts of the continent and the Caribbean. One of those women, Nydia Dauphin, heard about the fellowship program and forwarded the application to our group and strongly encouraged us all to apply. I’m so grateful for my sister Nydia. She could have easily kept that opportunity to herself but instead chose to share it with us, her sisters.

F2F Africa: What impact do you think you can have with this platform?

SPL: I have increasingly become preoccupied with being connected to other dynamic young leaders of African descent throughout the diaspora in efforts to work on a current and future agenda toward true liberation for our people. I believe that I will be able to articulate some of the issues being faced by people of African descent in the United States while also learning the international mandates and mechanisms that have been established by the United Nations to promote and protect the human rights of all people, but most specifically Black people. Upon my return, I will launch a series of programs and initiatives via the Museum of Contemporary African Diasporan Art (MoCADA) in New York City who is proudly serving as my sponsor institution.

SPL: The mountains! They’re so incredible and provide the perfect backdrop for the juxtaposition of old world architecture and new world graffiti.

F2F Africa: Where else have you traveled?

SPL: I’ve been all over, and I still have so many places to go! My first time out of the country was 10 years ago when I traveled to London, Madrid, and then later in the year to Brazil. The Brazil trip totally blew my mind and shifted all kinds of personal paradigms for me. That introduction to traveling abroad initiated me in to the society of individuals with an insatiable wanderlust. Over the past decade, I’ve also been to Ghana, Nigeria, Egypt, Cuba, Suriname, the Dutch Antilles, Barbados, Jamaica, Puerto Rico, the Dominican Republic, the Netherlands, France, Germany, Sweden, and now Switzerland. Some of these places I’ve been blessed to travel to multiple times. This year, I’m hoping to get to South Africa, Tanzania, Morocco, and Nigeria for New Years.

F2F Africa: What has your work been leading up to with the fellowship?

SPL: The past few years, I’ve been deeply engaged in research on the Dutch Caribbean Diaspora and have been traveling back and forth to Netherlands and the Dutch Caribbean studying the survival of African retentions there. Additionally, I’ve been working on a documentary about Zwarte Piet, the racist Blackface tradition in the Netherlands. My goal with the film is to further investigate the systematic racism that has plagued the country since the Dutch’s significant involvement in the Slave Trade.

F2F Africa: In your own words, what do you feel put you at the top in terms of the fellowship?

SPL: One of my all-time favorite spiritual books is Deepak Chopra’s “Spontaneous Fulfillment of Desire.” In his introduction, he encourages readers to think about a particular aspect of their lives and recall activities that they were doing then that have led up to what they are doing now. When I perform that exercise as it relates to the African Diaspora, I’ve spent the past 15 or so years investigating the African Diaspora on some level via my educational training, my travels, my professional activities, my day-to-day studies.

My undergraduate and graduate degrees are in African Studies. I attended Howard University, an HBCU that perhaps has the most-diverse Black student population in the world. I’ve worked for African Diasporan institutions, including the African American Museum in Philadelphia, the McKenna Museum of African American Art in New Orleans, the Caribbean Cultural Center African Diaspora Institute in New York, and for other institutions such as MoCADA as a consultant.

My curatorial and research projects are an exploration of various themes related to the Diaspora. But more importantly, the way in which I engage activism through art probably sets me apart from some of my peers whose activism is expressed through more traditional disciplines and methods. So honestly, when I completed my essay and application, I felt that what I turned in was indeed excellent. That’s mostly because everything that I’ve done to date over the past several years has prepared me for this moment. I once said that the Diaspora is my community. Now more than ever, I believe that to be true.

F2F Africa: In light of the recent call to the African diaspora, do you think the African Union should have a similar more formal initiative?

SPL: The African Union has a lot on its hands regarding dealing with the affairs concerning its many nations within the continent. But yes, I do believe that some type of apparatus — a conference or working group — should be established that creates and encourages dialogue and cooperation between Africa and her millions of children who are the descendants of those who were stolen and carried across the ocean during the Trans-Atlantic Slavery Holocaust.

F2F Africa: Any thoughts for how others can turn their interest in Pan-African affairs and culture into a career of passion?

SPL: I believe that true Pan-Africanism is grounded in an African-centered worldview. One must adopt an Africanist state of mind in order to commit to any cause related to people of African descent. One does not have to be a curator or researcher in order to embrace a career of passion.

I firmly believe that people of African descent, whether descendants of captive Africans brought to the New World during the Trans-Atlantic Slave Trade or continental Africans, should progressively operate from an ideology of empowerment and connectedness to all Black people in their local, national, and communities abroad. If you truly love Black people, you will devote your entire being to expressing that love in everything you do.

Cherae Robinson is a self-described “passport stamp collector” and has traveled to nearly 30 countries, 8 of them on the African continent. In 2012 she realized one of her biggest dreams when she took 80 young professionals to Africa and founded the Afripolitans, a collective of professionals interested in creating a stronger narrative on Africa through commerce, connections, and creativity. Committed to being a “Game-Changer” in how the world sees Africa, Ms. Robinson’s vision has revealed itself in the creation of her first independent venture Rare Customs, a tourism market development firm.