This article has been edited and was first published on March 17, 2014. 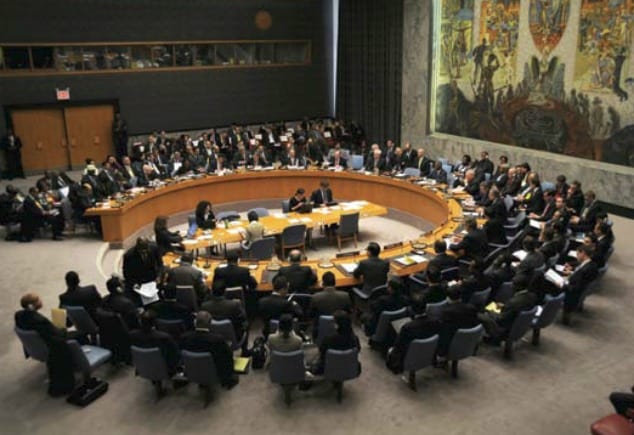 The United Nations Security Council (pictured) can be compared to an “old boys club,” a cliché literally used to describe a social and business network among former pupils of male-only private schools. In this case, the term is used satirically, describing a network specifically and separately upheld to preserve elitism — economic, political, and military superiority. This network, since its inception, first excluded African countries*. Subsequently, African countries were invited to sit at the roundtable. However, these seats may be described as mere tickets to the gallery with express permission to sit, observe, and applaud, since Africa has not been provided with veto power in the Security Council.

The Security Council is a critical and central organ of the U.N. It is mandated with unequalled powers to maintain international peace and security. Outlined in the U.N. Charter, the Security Council’s powers, which are executed through resolutions, include establishment of peacekeeping operations, establishment of international sanctions, and the authorization of military actions.

Since its founding in 1946, the Security Council has consisted of five permanent members who hold sole authority to veto substantive resolutions put before the Security Council for deliberation. These five permanent members include four nations that are considered the victorious powers of World War II: The Republic of China (replaced by “The People’s Republic of China”), The Union of Soviet Socialist Republics (succeeded by “Russia”), the United Kingdom, the United States of America, and one nation liberated from Nazi Germany during World War II: France.

In essence, through the last 60 years, together these five permanent members have maintained authority over major decisions affecting and controlling the economic, political, military, and social direction of the world. Consequently, due to the fact that Africa is not a permanent member of the Security Council and does not have veto power, the continent has been left without a decisive voice in the direction of the world.

Accordingly, the Africa Group has a percentage representation of 28 percent of all 193 U.N. member states. As a region, Africa controls the largest percentage of the seats in the organization but is not given proportional voting powers in terms of being able to veto Security Council resolutions. Reasonably, the region should have as much control as any other region over matters discussed and implemented by the organization.

In addition to Africa’s position as the most-represented region in the U.N., a significant number of resolutions adopted by the Security Council directly concerns or affects Africa.

On September 25, 2013, I attended the Africa-America Institute’s 60th Anniversary Awards Gala in New York City. The gala featured a “Conversation on Africa’s Past, Present, and Future,” with several speakers including the Prime Minister of Ethiopia and Chair of the the African Union (AU), Hailemariam Desalegn; the President of Namibia, Hifikepunye Lucas Pohamba; and Tanzania’s Minister of Foreign Affairs and International Cooperation, Honorable Bernard Kamillius Membe (MP).

Consequently, it was established that in the year 2012, 37 of the 53 resolutions discussed and adopted by the Security Council either directly concern an African Country or affect Africa. This results in an overwhelming percentage of 69.81 percent number of resolutions affecting Africa.

Apparently, as constituted, the Security Council does not need the agreement of an African country in order to adopt resolutions that could have a significant impact on the continent. Currently, there are only three non-permanent seats presently allocated to Africa. In addition, due to Africa’s lack of veto power, African countries could easily be outvoted in order to pass resolutions that exclusively affects Africans.

As explained earlier, a resolution on substantive matters is adopted if nine or more of the 15 Security Council members vote in favor of the resolution and the resolution is not vetoed by any of the five permanent members.

Evidently, in order to pass a resolution that may negatively affect an African country, a sponsor only need convince nine non-African members of the Security Council to vote in favor of the resolution and also convince the five permanent members to refrain from vetoing the resolution.

In 2008, for instance, the United Kingdom and the United States of America sponsored a resolution concerning Zimbabwe. Under this resolution, the Security Council was asked to impose sanctions against Zimbabwe’s President Robert Mugabe, impose an arms embargo on Zimbabwe, as well as impose a travel ban and financial freeze against President Mugabe and 13 senior government and security officials who were considered responsible for the crisis in Zimbabwe.

According to a UN press release published on July 11, 2008, the resolution determined that “the situation in Zimbabwe posed a threat to international peace and security in the region.” However, in disagreement, Zimbabwe’s representative insisted that Zimbabwe was “at peace with itself and its neighbors,” and accused the “British and their allies” of employing “their media to ‘viciously portray Zimbabwe as a lawless, disorderly and undemocratic country.”

Zimbabwe’s representative also complained that “the current sanctions are basically an expression of imperialist conquest and no amount of propaganda or denial can ever wish this away.” In support of Zimbabwe’s position, the UN press release explained that “there had been adverse, over-dramatized reports of inter-party violence [in Zimbabwe], but only 10 percent of the country had witnessed some violence, which did not justify tabling the draft resolution.”

Speaking on his country’s decision to veto the resolution, China’s Ambassador to the U.N, Wang Guangya, explained that “adopting the resolution would have been ‘counterproductive to the initiatives and efforts now underway by the Africans to find a solution to the problem in Zimbabwe.”

This specific case of Zimbabwe provides proof that the continent of Africa cannot continue to participate in the U.N. without veto power. Besides the disappointment that Zimbabwe needed two non-African countries, China and Russia, to defend her position and veto the resolution, there are other issues that demand inquiry.

First, there was an ongoing mediation led by President Thabo Mbeki of South Africa and President Jose Eduardo dos Santos of Angola. This mediation was completely ignored by the sponsors of the resolution who seemed more interested in imposing sanctions. Furthermore, while the sponsors of the resolution had insisted that “the situation in Zimbabwe posed a threat to . . . security in the region,” the U.N.’s July 11, 2008, press release revealed that the “resolution’s co-sponsors had not considered the position of regional States, which were calling for the continued search for a solution.”

Thus, it seemed that the sponsors of the resolution were simply uninterested in finding a solution that was in the best interest of Zimbabwe and the region, but as argued by the Zimbabwean representative, “the draft was an attempt to interfere in the country’s internal affairs.”

It is unacceptable that a continent whose military, political, financial and social affairs are dictated in large numbers by the Security Council has absolutely no voice in the ultimate direction of its affairs.

In fact, this may have been the case in the Zimbabwe matter, as the British Permanent Representative to the U.N., John Sawers, stated that “the assessment here is that China would not have vetoed [the resolution] on its own because they have a range of conflicting interests at stake.”

African nations cannot continue to rely upon others to decide upon issues that directly affect Africa. Steps must swiftly be taken in order to regain control of Africa’s destiny.