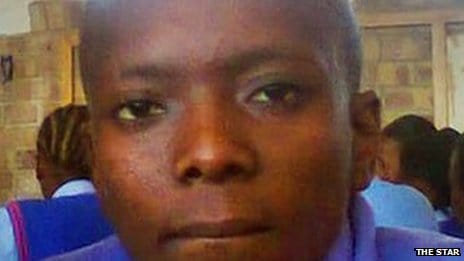 Sixteen-year-old student Sizwe Kubheka (pictured) of Palm Springs, South Africa, recently died, after his teacher allegedly beat him in class, according to BBC.

On March 17th, Sizwe reportedly came home and told his mom, Maria, that he was suffering from a headache. That fateful Monday was reportedly the same day Sizwe had been disciplined by his teacher for being caught with another student making noise in class.

The unnamed teacher reportedly punished Sizwe by beating his head with a belt.

Since both Maria and her husband are unemployed, they couldn’t afford to take their son to the hospital. Trying to make the best out of a bad situation, Maria reportedly resorted to giving Sizwe painkillers.

But the painkillers wouldn’t stop Sizwe’s hearing from disappearing and head from becoming severely swollen, among other problems.

Just before Sizwe ultimately passed, Maria explained her son’s condition, “My boy was deaf just before he died. He couldn’t even hear or see us when we spoke with him at his bedside.”

Police spokesman Tshishiwa Mitileni added, “If the results indicate that the cause of death was due to assault injuries, then the charge will change to murder.”

As aforementioned, while corporal punishment was ended in South Africa nearly a decade ago, according to published reports, many teachers continue to use it on unruly students. In fact, according to a survey conducted in the country on 410 students in 2004, while corporal punishment happens the most to students in rural areas, virtually no student — irrespective of his or her socioeconomic status — is exempt from being beaten: