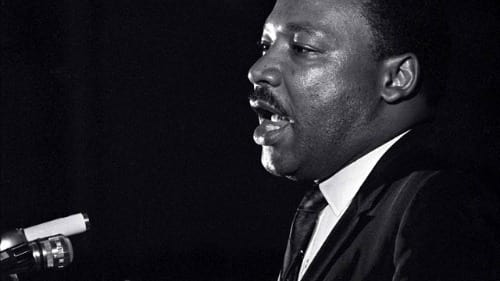 The assassination of Dr. Martin Luther King Jr. remains one of America’s most-gripping moments, shocking a nation while also shattering the hopes and dreams of many. On this day in 1968, Dr. King, the influential face of the Civil Rights Movement in the United States, delivered his final speech just a day before he was gunned down at a Memphis hotel.

SEE ALSO: Empress Zawditu Of Ethiopia Died On This Day In 1930

Living under constant threat and duress, King trudged on in his fight for fair rights despite the toll it took on him. The vocal and charismatic leader was in Memphis, Tenn. to support Black sanitation workers who held protests in face of unfair working conditions and low pay. He had been there twice before, with one of the rallies turning violent. Dr. King returned to the region to help restore order and promote his nonviolent agenda.

It was said that his colleagues at the Southern Christian Leadership Conference (SCLC) told Dr. King not to return to the city, but King was scheduled to lead a meeting at the Bishop Charles Mason Temple, which is where he delivered his “I’ve Been To The Mountaintop” address. Initially, the leader asked his colleague Rev. Ralph Abernathy to lead the meeting, but Dr. King was urged to leave his hotel and deliver his speech.

There was a bomb threat against an airplane he was set to ride on his return to the town, and he even made mention of the threat to his life during the speech. With his trademark fearlessness, though, Dr. King rallied those in attendance in stirring fashion.

From Dr. King’s “I’ve Been To The Mountaintop” address:

Well, I don’t know what will happen now; we’ve got some difficult days ahead. (Amen) But it really doesn’t matter to with me now, because I’ve been to the mountaintop. (Yeah) [Applause] And I don’t mind. [Applause continues] Like anybody, I would like to live a long life – longevity has its place. But I’m not concerned about that now. I just want to do God’s will. (Yeah) And He’s allowed me to go up to the mountain. (Go ahead) And I’ve looked over (Yes, sir), and I’ve seen the Promised Land. (Go ahead) I may not get there with you. (Go ahead) But I want you to know tonight (Yes), that we, as a people, will get to the Promised Land. [Applause] (Go ahead, Go ahead) And so I’m happy tonight; I’m not worried about anything; I’m not fearing any man. Mine eyes have seen the glory of the coming of the Lord. [Applause]

It would be the last such talk he would deliver.

Although Dr. King had often faced the specter of death in his travels, including surviving a knife attack by a mentally ill woman earlier in his career, his speech seemingly foretold his doom.

Just under 24 hours later on April 4, 1968, at 6:01 p.m., a shot rang out and struck King as he and Abernathy were set to enter their shared room at the Lorraine Hotel. A man was seen running from the hotel as Abernathy and Andrew Young remained on the scene. Just over one hour later, King was pronounced dead at St. Joseph’s Hospital.

The news sent the nation in to shock and mourning, sparking violent riots in the cities of Washington, D.C.; Baltimore, Md.; and Chicago, Ill.; and other cities.

James Earl Ray was the gunman that fired the fatal shot from a room across from King’s room. Ray, an escaped convict, was captured two months later at London Heathrow Airport trying to head to another country. Sentenced to 99 years in prison, Ray died in prison in 1998 at the age of 70.

Many theories regarding Ray and the Federal Bureau of Investigation’s (FBI) invasive investigation in to Dr. King’s life have swirled about since. There are those who believe Ray was an operative for the FBI. Records from the FBI related to the King murder case will not be made public until the year 2027.