It is quite disturbing that in 2018, adults and children all over the world are still being bought and sold in public markets and women are forced to marry against their will to provide labour. Others are forced to work in factories, on boats and in homes as maids while their wages are withheld.

These are all forms of modern slavery and it is defined by the Global Slavery Index as situations of exploitation that a person cannot refuse or leave because of threats, violence, coercion, deception or abuse of power.

The Central African Republic, DR Congo, Somalia, Sudan, South Sudan and Chad are among the top 10 most vulnerable countries in the world to modern slavery. 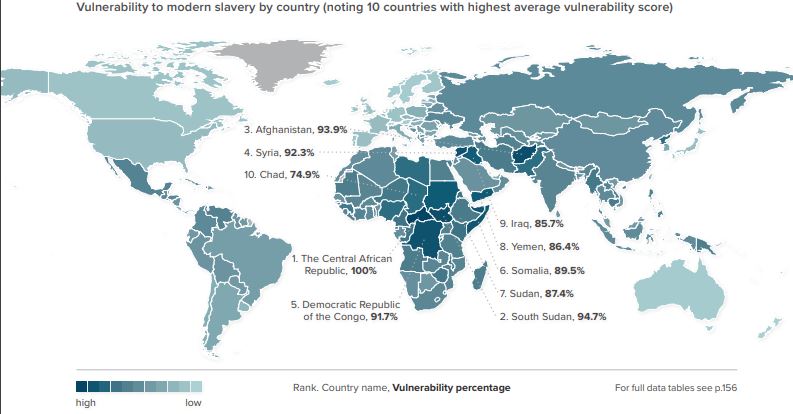 Nigeria and the Democratic Republic of Congo are among the top 10 countries with the largest estimated absolute number of peoples in modern slavery including China, India and other populous countries accounting for 60 per cent of people who live in modern slavery and over half of the world’s population.

Modern slavery is most prevalent in Africa followed by Asia and the Pacific region. The country with the highest prevalence rate of modern slavery is North Korea. Out of the 10 countries, five are from Africa and the others are Afghanistan (5), Pakistan (8), Cambodia (9), Iran (10).

These African countries took the 2nd, 3rd, 4th, 6th and 7th positions in the top 10 countries with the highest prevalence of modern slavery in the world and their governments are not doing enough to contain it.