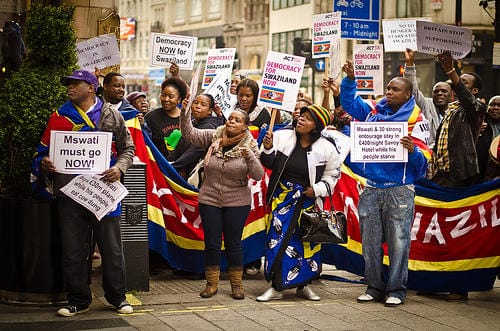 Swaziland’s biggest teachers union has called for a strike against the low wages paid to teachers in the area.

The Swaziland National Association of Teachers (SNAT) has about 9,000 members throughout the country. They began the official strike on June 25th of this year after the government dismissed the wage demands.

The strikers are demanding a below-inflation salary increase. The average monthly wage before tax for primary school teachers is at US$470 and almost twice that for secondary school teachers. Inflation in Swaziland is currently at about 9 percent. Wilson Ntshangase, the Education Minister, expressed his frustration with the teachers to the media. He said, “There is no money to pay teachers a 4.5 percent increment. They have been told this again and again.”

The Swaziland Transport and Allied Workers Union (STAWU) joined the SNAT strike on June 28th of this year. Public transportation took a major hit, and the government filed for a 30-day detention order for SNAT.

Percy Simelane, a government spokesperson, said that the striking teachers will be fired. While his concerns for a productive solution to the problem are legitimate, if the firing does go through, the impact on the educational system will be devastating.

It will leave thousands of children without access to adequate education and will likely lead to a dramatic increase in classroom size. While the government may be able to replace some teachers, it is not feasible that they will replace all 9,000 in such a short amount of time.

One teacher on strike, condemned the statement and said, “That [firing teachers] would certainly cut down on government's wage bill, because a majority of teachers will be dismissed. But it shows government sees education as a political battleground, not as a national crisis that needs attention. As an African teacher I wonder why I am not respected. Why do some African leaders give lip service to the importance of education but do so little in terms of policy and expenditures?”

Some students have joined the teachers in their strike, leading to many schools being completely empty. Amos Dlamini, a striking teacher, expressed her concern for those striking in solidarity in the streets. After the government officially declared the strike illegal, she worries that security and police forces will openly attack strikers because they have the support of the government.

Undoubtedly, the next few weeks in Swaziland will be eventful. Hopefully a peaceful agreement can be reached between the striking teachers and the government, and violence can be avoided.