One of the biggest traditional events which occur annually in Niger, a landlocked country in West Africa is the Gerewol beauty pageants which surprisingly throw up only males and not females as contestants. Unlike most beauty pageants around the world, the Gerewol festival is always a male affair with the finest men on parade and it is fiercely contested.

The intrigues, dynamics, exquisite cultural display, use of some of the best African costumes, the carefully applied make-ups and the build-up to the occasion has made the festival one of the most exciting traditional festivals in the world. But this festival is not exclusive to Niger; it is also observed in Chad and wherever the Wodaabe tribes are domiciled.

The Wodaabe tribe are traditionally nomadic cattle-herders and traders found mostly in the Sahel region with significant populations in Niger, Nigeria, Cameroon and the Central African Republic. They speak the Fula language and are predominantly Muslims. They are reputed for their beauty, rich cultural values and detailed attire.

Although polygamy is a common practice among them, they have one of the most respected code of conduct and behaviour espousing such values as humility, patience, loyalty, an amiable disposition to guests, etc. which are observed strictly till today.

Gerewol is held annually in September to mark the end of the rainy season and the commencement of the Wodaabe tribes’ journey to their dry season pastures. The festival is usually a week-long celebration which symbolizes a time for love and involving various competitions among the males including camel racing, storytelling, animal trading, songs and dances, etc. However, the most gruelling but also the most vital part of this celebration is the courtship dance called the Yaake dance, whereby suitors dance for long hours under the desert sun to impress eligible women. 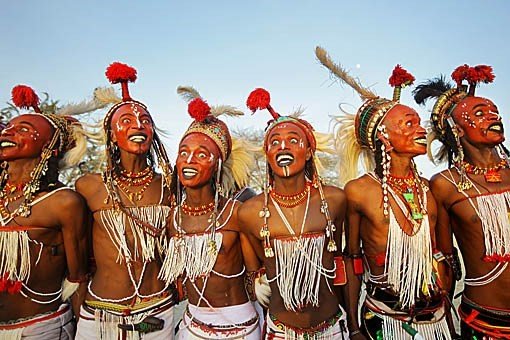 Before the dance, the contestants wear elaborate make-up using lipsticks and red ochre as well as adorning themselves with traditional costumes including feathers, painted faces, traditional hats, beads, etc. to impress marriageable women. They are also hair styled with ostrich feathers and cowrie shells and have decorated chests with criss-cross patterns of white beads.

Their beauty is often scrutinized based on their tallness, white eyes and teeth, facial symmetry, plaited hair, and costumes. During the dance, the men will roll their eyes and show their teeth to display these characteristics. Wodaabe women always appreciate this show of love and beauty. It should be noted that contestants are given a magical potion made from herbs to aid them to withstand the rigorous dance and selection process.

The beauty pageant is judged by young women, often the daughters of previous winners. They are saddled with the responsibility of choosing the most attractive male. At the end of the competition, each of the jury chooses a winner who she takes as her lover – an affair that might last a day, or become a marriage. 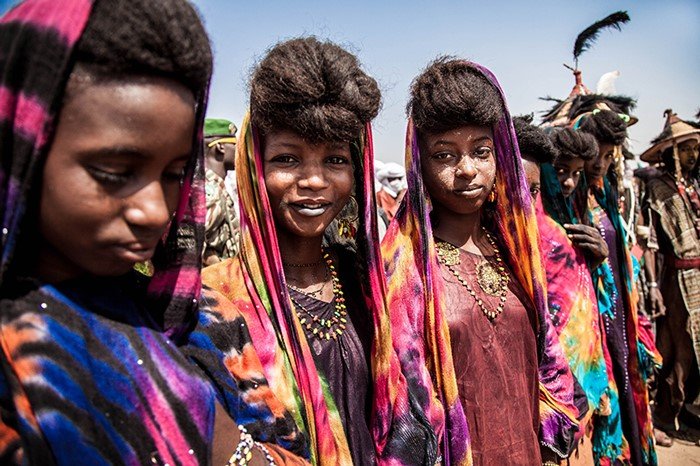 Interestingly, the Gerewol festival allows young men and women to mix and flirt with one another. Marriages and children have often been the product of this traditional venture but significantly, there is no room for moral policing or social stigma of any kind as a result of what occurred during the festival.