The Hadza are a tribe of people that inhabit the areas surrounding Lake Eyasi in Tanzania.  They are classified closely to the Khoisan languages, which are described as dialects that incorporate clicks.

Since the 18th century, the interaction between this farming and herding population and the Tanzanian government hasn’t been amicable for the most part. These encounters, as well as tourism, safari hunting and encroachment, caused the drastic decline in the Hadza population in the 19th century. 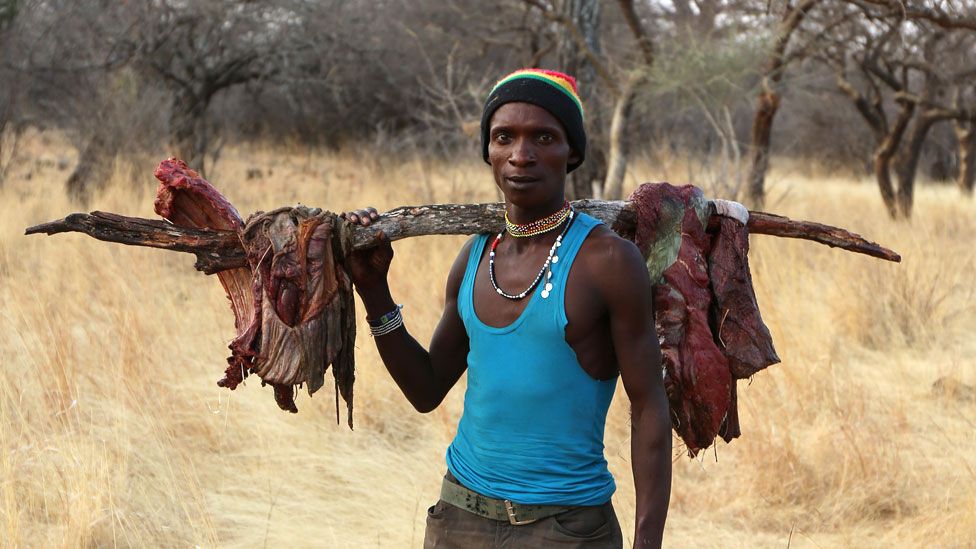 The Hadza are descendants of Tanzania’s indigenous hunter-gatherer group and have inhabited the area for thousands of years without much modification to their routine up until 100 years ago. Genetic testing suggests that a mixture occurred between the Hadza and the Bantu. There has also been intermingling with the Nilotic and the Nilotic Datoga.

The Hadza live under the notion of egalitarianism. They do not pay local or national tax but they vote in the national elections. Though hunting is illegal in the Serengeti Plains, the laws aren’t enforced upon the Hadza. Additionally, they are allowed to forage in the Yaeda Valley.

The tribe has been negatively affected by tourism, safari hunting and attempts by colonial and the Tanzanian governments to settle them by introducing them to farming and Christianity, hoping they would adopt the lifestyle and conform to government interests. 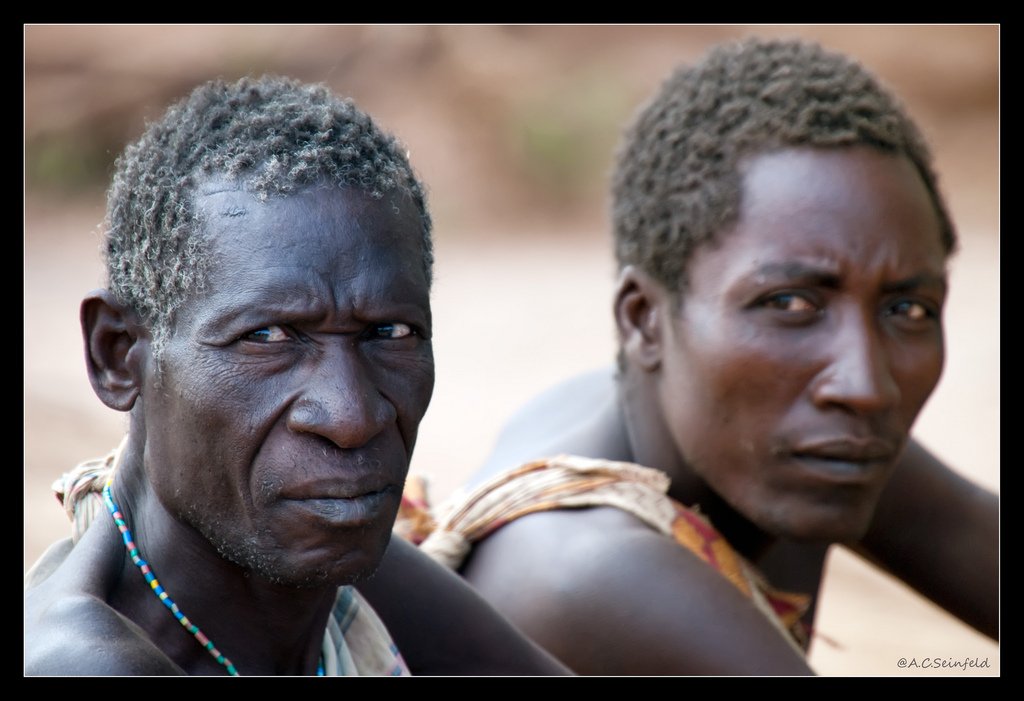 One such case was in 2007 when the Hadza lands adjacent to the Yaeda Valley was leased to the Al Nahyan royal family of the United Arab Emirates for use as a “personal safari playground.” Subsequently, the Hadza were driven out, but protests and negative press led to the cancellation of the deal with the royal family.

According to oral history, the Hadza tribe is divided into four eras, each occupied by a different culture.

Since the beginning of civilization, the Akakaanebe or Gelanebe, hairy giants roamed the earth and did not keep tools or fire. They hunted their prey by staring at its face until it would fall and die.  They would proceed to eat the meat raw. 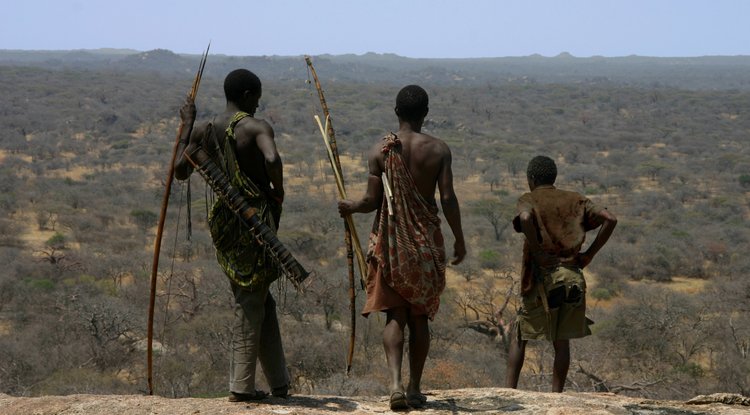 The Akakaanebe didn’t live in houses but rather slept under trees just as the Hadza do during the dry season.

In the second epoch lived the Tlaatlanebe, noted for their lack of hair. Fire was now used as an option to cook food. The Tlaatlanebe grew tired of humans so they chased them away; the animals also hunted using dogs.  The Tlaatlanebe utilized medicine and charms for protection from enemies. They lived in caves and originated the epeme rite, a gender ritual that marks the coming to age of the Hadza children. 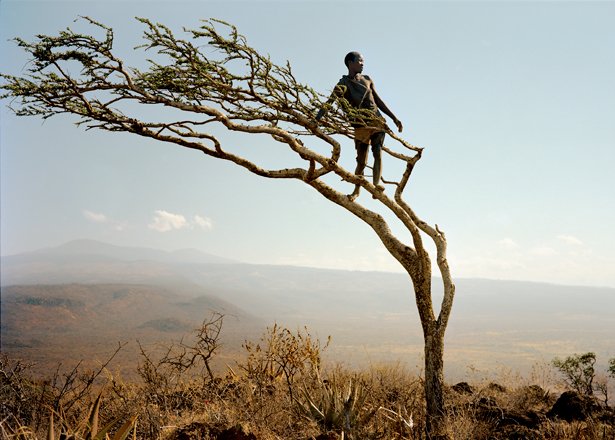 Member of the Hadza tribe standing in a tree…Interesting Facts

The third era was inhabited by the Hamakwabe, who were smaller than their ancestors.  They formulated bows and arrows, became skilled at the use of fire and invented containers for cooking.  They also built houses.  The Hamakwabe were the first to have contact with non-hunters with whom they traded iron to make arrowheads and knives.  They developed a gambling game dubbed lukuchuko.

Lastly, the fourth epoch, which continues today, is inhabited by the Hamaishonebe.

During the latter part of the 19th century, the Hadza began to interact with the Isanzu, Maasai and the Sakuma. Often times, the interaction was antagonistic which resulted in the death of many Hadza.  Pastoralists also killed the Hadza over stolen livestock. In the present day, the Hadza and Isanzu intermarry and live amicably.

As part of the Scramble for Africa, the Hadza became a part of German East Africa.

After many attempts by missionaries, German colonizers and the Tanzanian government to persuade the Hadza to settle in certain areas, the majority of the Hadza still carry out their unique way of life. 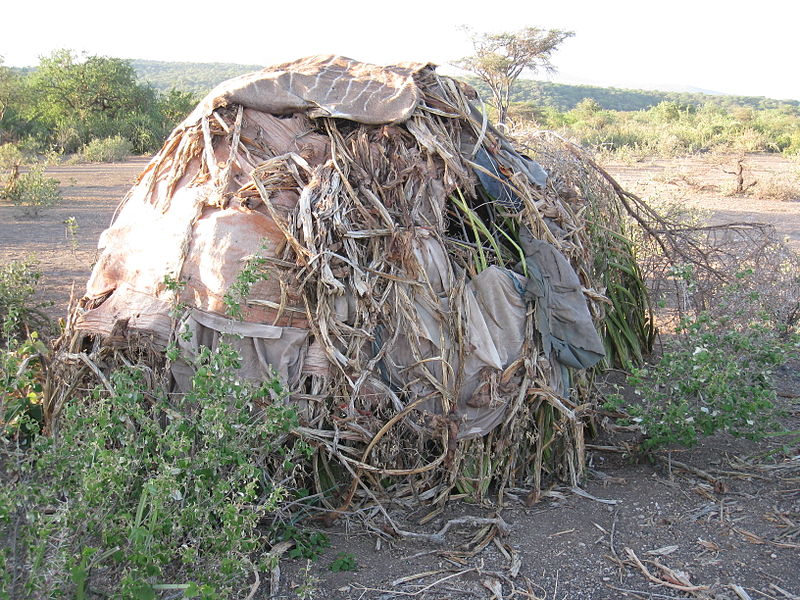 There have been four villages built for the Hadza – the Yaeda Chini, Munguli, Mongo wa Mono and the Endamagha or the Mwonyembe. The two former are occupied by the Isanzu, Iraqw and Datoga while the two latter are used by the Hadza to forage, farm and gather food for short periods of time. Afterwards, they return to hunting and gathering.

In present-day, the Hadza are organized into bands or camps of 20-30 individuals. They live in communal settings and practice cooperative childcare.  Camps can disband when a person gets sick or dies or if a conflict arises.

If a large mass of game such as a giraffe is hunted, camps are known to temporarily relocate to the area where the game is located. Groups of women tend to forage in groups while men forage individually and hunt in pairs with poisoned bows and arrows.