Before becoming the first and only female Prime Minister of Rwanda in 1993 and a national heroine, Agathe Uwilingiyimana worked her way to the top of the prestigious seat in the country from humble beginnings.

Despite the fact that she ruled for less than a year before being brutally killed, her legacy is one that lives on till this day in Africa and inspires many young women to climb as high as they possibly can without limitations.

Agathe was born on July 18, 1953, in a village called Nyaruhengeri. Her parents were poor farmers who survived solely on their products before they moved to Belgian Congo to find work. When Agathe was 4, her father moved the family back to Butare.

Agathe was a good student in school and passed her secondary school examination which enabled her to teach humanities at the age of 20. She received her secondary school diploma in mathematics and chemistry in 1976 and became a math teacher in Butare. Agathe studied Science related courses at a time when many women and young girls were not allowed to venture into such fields. 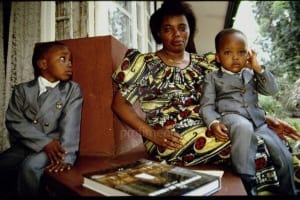 Agathe Uwilingiyimana and 2 of her children

While teaching in Butare, Agathe met her husband Ignace Barahira who she later married and had five kids with. In 1983, she taught chemistry at the National University of Rwanda while her husband worked in the University Laboratory. She received her B.Sc in 1985 and moved on to teach chemistry for another 4 years in the Butare Academic Schools.

Agathe received a lot of criticism from the Rwandan media as to how she obtained her science degrees.

Agathe was not only interested in the education of the Rwandan youth, but making sure that many girls get interested in science-related courses. She was also an advocate who set up a Credit Cooperative Society and Sorority in the Butare Academic Schools for the staff. Her hard work in setting the committee up and helping it function led to her appointment as a director in the Ministry of Commerce in 1989. This is where her journey to being prime minister officially began.

Agathe joined the opposition party at the time, Republican-Democratic Movement in 1992 and was appointed the Minister of Education by Dismas Nsengiyaremye. During her tenure in office as Education Minister, she awarded several scholarships through genuine open merit rankings. She also abolished the academic quota system. Despite all her good work, she was largely disliked by several opposition parties for being a woman with so much power in her hands.

After a meeting with President Habyarimana and all five opposing parties, Agathe took over from Dr Nsengiyaremye and was appointed as the first female prime minister. Agathe Uwilingiyimana was sacked as Prime minister just eighteen days after her appointment, however, she was caretaker of the position for eight months until she was killed.

She was assassinated in front of her house with her husband on April 7, 1994, by the presidential guard 14 hours after the assassination of President Habyarimana. Her children were saved and settled in Switzerland with the help of Captain Mbaye Diagne.

In 1995, Agathe Uwilingiyimana was declared a heroine with the likes of heroes of Rwanda including King Mutara III Rudahigwa.