At first read or hearing, the name sounds nothing African but rather rings an Asian bell. One would be very surprised to see the image of an African young lady in full army regalia ready for war. The life of Seh-Dong-Hong-Beh is not as known and celebrated as it should be perhaps because little to no account of her life is accounted for.

It is extremely difficult to find information on the bold young warrior that led the Dahomey Amazon to war against the French and the Egba fortress of Abeokuta.

Seh-Dong-Hong-Beh is believed to have been born in 1835 at a time that the Dahomey Amazons had been well established in Dahomey. Among the locals, the warrior women army was known as the minos which translate as our mothers, a name given to them by the all-male army of Dahomey.

The name Dahomey Amazon was given to them by traders and later scholars who likened them to the Amazon women in Greek mythology. 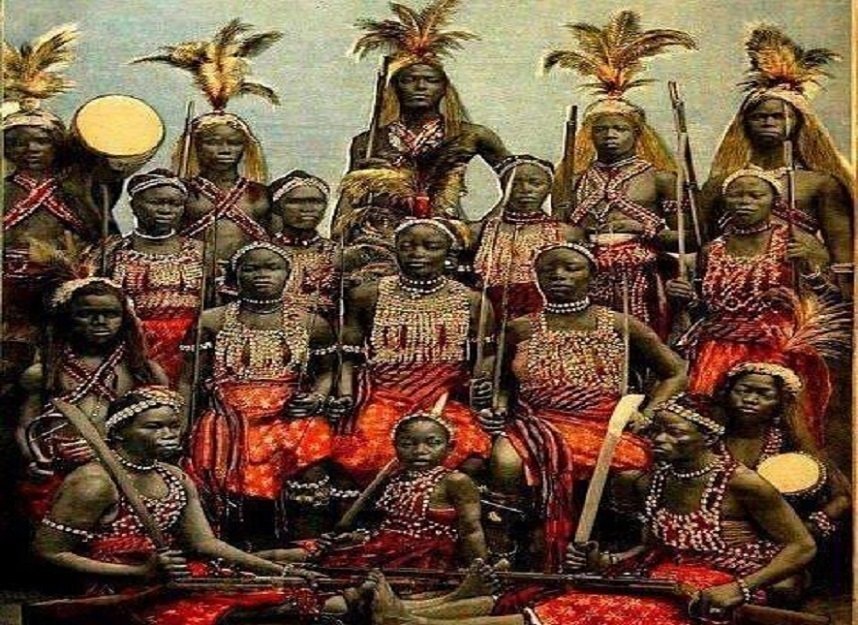 At an early age, a little over 10 years, Seh-Dong exhibited strength among her peers and was selected to start training as a warrior. This was a prestigious honour as girls selected were close to the king and enjoyed royal treatment. They also remained virgins for as long as possible and could marry into royalty.

Seh-Dong-Hong-Beh rose quickly in the ranks and at the age of 15 she was selected to be the leader of the all-female army to prepare for war against the Egba of Abeokuta. In 1851, she led the Minos or Dahomey Amazons of 6,000 female warriors to war against the Egba fortress of Abeokuta. Exhibiting her strength, Seh-Dong defeated the Egba fortress and obtained several slaves for herself and her King, returning with the head of the leader of the fortress army who refused to bow down and surrender as a slave to a female warrior.

Seh-Dong, as instructed by the King of Dahomey of the time, assisted in many raids to help obtain slaves for the Dahomey Slave Trade.

She was not only strong but very beautiful and had a lot of favour from the kings and his royal entourage. As leader of the Amazon, Seh-Dong was treated like royalty and many bowed to her or lowered their eyes when addressing her as a sign of respect. She had a special room in the King’s palace and had slaves who were at her beck and call. Due to the mandatory purity of the Amazons, there is no account of Seh-Dong being romantically involved with any man nor having children of her own. 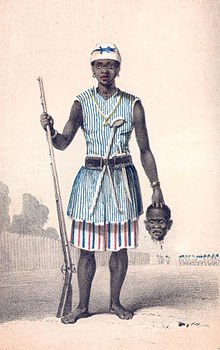 The only mention of Seh-Dong-Hong-Beh appears in the journals of Frederick E. Forbes, Dahomey and the Dahomans; being the journals of two missions to the king of Dahomey and the residence at his capital in the year 1849 and 1850. In his compiled book, there is an illustration of Seh-Dong with short hair dressed in her war clothes holding the head of a captured army leader. Forbes wrote in his journal during his trip to Dahomey to negotiate with the then King, King Guezo to end the Slave Trade.

In 1882, Seh-Dong and the King led the Amazon warriors to war against the French colonists to battle over trading rights. The Dahomey warriors were less armed than the French army but fought a good fight. Seh-Dong led the 2,000 Amazons into battle and forced the French army to retreat. The Amazons later burnt down several settlements of the French in protest.

There’s no account of the last days of Seh-Dong. Many believe that she could have died in battle during the first Franco-Dahomean war of 1889. Another account, more vivid than the first states that Seh-Dong retired from the army. After training the new generation of Dahomey Amazons, she is believed to have vanished during one of the many fires that the Dahomey army set on villages and small settlements as a way of protesting against surrendering to the French.

The life of Seh-Dong-Hong-Beh is definitely worth celebrating and accounting for and a lot of work has to go into uncovering the full life of this brave leader of the Dahomey Amazon warriors. Her story must not be left untold.