On November 29, December 1 and other days later in 1781, 85 Ghanaian men, women and children were thrown overboard The Zong, a slave ship that was due to arrive in Jamaica. In protest, 10 more slaves jumped into the sea. In total, 142 slaves lost their lives due to the massacre. 62 Africans died previously due to malnutrition and disease. 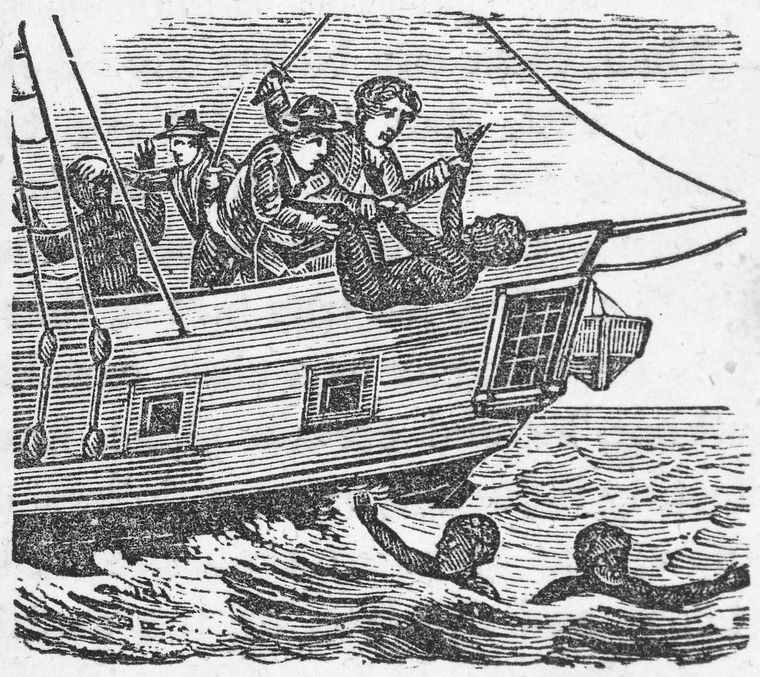 Illustration of slaves being thrown overboard The Zong

The Zong was originally named Zorg, a Dutch word which ironically translates to “Care” in English. The slave ship was owned by the Middelburgsche Commercie Compagnie; based in Middleburg, Netherlands.  In 1777, the ship made a voyage to Suriname, South America. After being seized by the British, on February 26, The Zong arrived in Cape Coast, Ghana.

In 1781, the ship was acquired by an individual described as Master of William.  As a way to curtail financial responsibility as dead slaves were considered to be of no worth, surgeons boarded the ship to examine the fitness of slaves. Rejected slaves were killed by African handlers upon orders.

As the ship sailed from Africa, it was equipped with a 17-member crew, which was a precursor for the ensuing trouble ahead.

On August 18, 1781, the ship left Ghana with 442 slaves. The number of slaves was far more than the ship could handle.

On September 6, after stopping at Sao Tome to restock for water, the crew headed onto the Atlantic Ocean to Jamaica.  On November 18 or 19, the ship was due for another refill of water, but crew members did not stop to fill the boat. 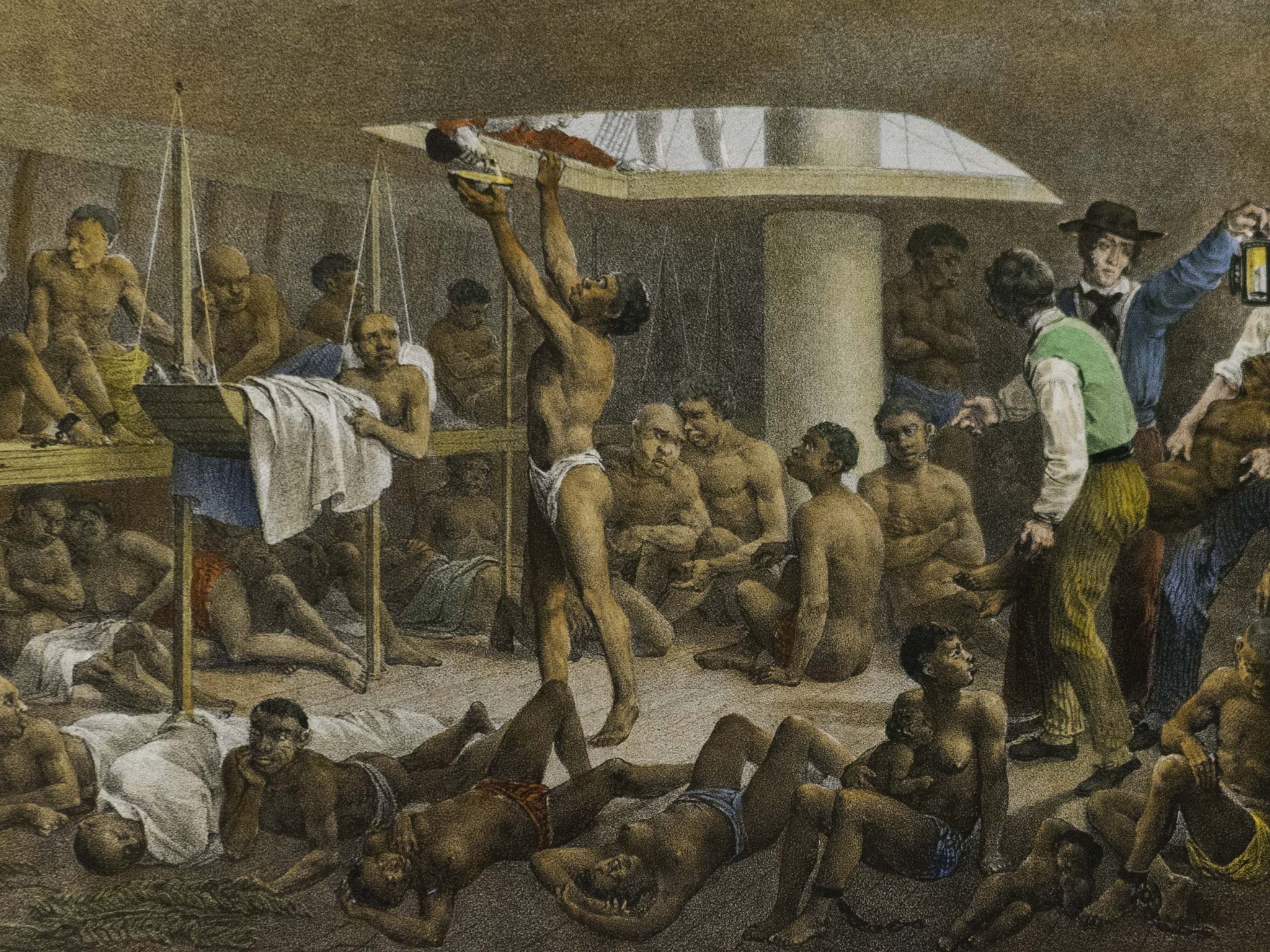 Depiction of slaves and slave traders during transport..Insh

On November 27 or 28, crew members mistook Jamaica for Saint Domingue, Hispaniola.  Leaving Jamaica, the crew realized their mistake after sailing for 300 nautical miles.  At that point, there were only four days’ worth of water left on the ship.  Heading back to the Caribbean island would take 10-13 days.

If slaves died on the ship, ship workers would not receive redress from insurers.  If the slaves died of “natural causes” no payout would be issued.  If the slaves were thrown from the ship in an attempt to “save other ship members and property”, a loss could be claimed with insurers.  Insurance covered what would equate to $39.50 dollars per slave.

The crew members decided to throw nearly half of the slaves into the ocean and claimed that jettison of the slaves was necessary due to lack of water.  The ship arrived in Jamaica on December 22 – with 420 imperial gallons of water aboard.

There were 208 slaves aboard The Zong when it arrived in Black River, Jamaica.  The average cost of each slave was $47.40.

Ownership of the ship  remained with the British and it was renamed Richard of Jamaica.

Ship owners claimed compensation but were denied monies by the insurers.  The logbook aboard the newly christened Richard of Jamaica was lost – it contained proof of the massacre.

A court case ensued at the Guildhall in London on March 6, 1783.  The judge – Earl of Mansfield, presided over the case.  He also oversaw the Somerset Case in 1772. A jury ruled in favor of the slave owners in The Zong case. 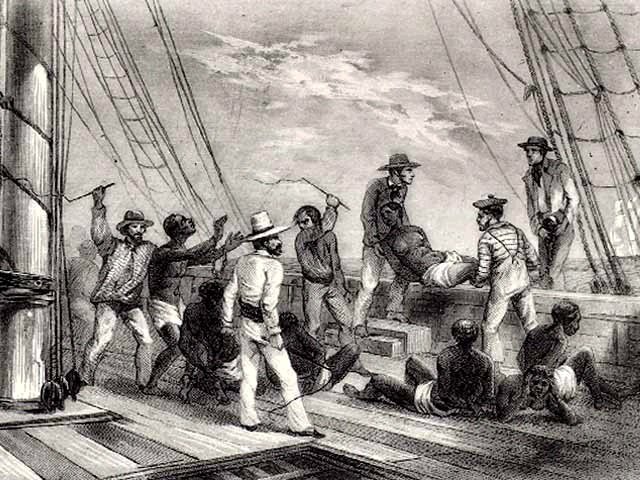 Depiction of the Zong massacre…Alchetron

An appeal was made and another trial was held on May 21 and 22, 1783.  It was determined that the crew members aboard The Zong were liable.  It was also revealed that after the second batch of slaves were killed, heavy rain fell and another group of slaves were killed after the rain stopped.  No crew member aboard The Zong was ever held liable for killing the slaves.

The Zong massacre gained global coverage. Granville Sharp, a white English abolitionist, attempted to get the crew members penalized for killing the slaves but was unable to.

The Zong massacre became the catalyst for the abolitionist movement in Britain.  In 1788, the Slave Trade Act restricted the number of slaves transported.

The Slave Trade Act of 1807 prohibited the Trans-Atlantic Slave Trade in Britain with the United States following suite in 1808.

Slavery was eliminated by initiation of the Slavery Abolition Act 1833 – in the British Empire.

In 2007, a dedicatory stone was set up at Black River, Jamaica at the site where The Zong should have docked.

The Zong massacre has influenced works of literature such as Feeding the Ghosts and a collection of poems named Zong!