Quobna Ottobah Cugoano, a Ghanaian native sold into slavery at the age of 13 is famously known for saving Henry Demane, a kidnapped slave from being shipped off to the West Indies in 1786.

Cugoano immediately contacted Granville Sharp, a famed abolitionist who then arranged to have Demane removed from the slave ship minutes before its departure. 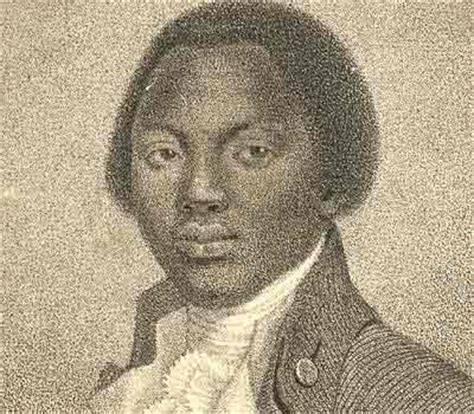 Cugoano was a prominent member of the Sons of Africa – an African abolitionist group in England.

Cugoano was born circa 1757 in Ajumako, West Africa; the central region of Ghana. He belonged to the Fante tribe.  At 13, Cugoano was captured and sold into slavery. He was subsequently transported to Grenada to work on a plantation.

In 1772, he was purchased by an English man and went to live in England. It was at this time Cugoano’s name was changed to John Stuart. Cugoano was given the opportunity to learn how to read and write.  He converted to Christianity and was baptized.

While working for Richard Cosway and his wife Maria 1784, Cugoano was able to meet premiere British political figures and cultural personalities.  He also joined the Sons of Africa alongside Olaudah Equiano.

His 1787 book, Thoughts and Sentiments on the Evil and Wicked Traffic of the Slavery and Commerce of the Human Species, Cugoano highlighted the effects of slavery. He sent the book to key political persons in Britain, but the abolition of slavery remained a notion. In the book, Cugoano stated:

Is it not strange to think, that they who ought to be considered as the most learned and civilized people in the world, that they should carry on a traffic of the most barbarous cruelty and injustice, and that many think slavery, robbery and murder no crime?

He is also said:

In 1791, Cugoano revised his book and geared the new version to members of Sons of Africa.  This edition of the book addressed the British government’s lack of support towards London’s Poor Blacks, a group of freed Africans then residing in London.  He also cited how the Black Loyalists – freed African individuals in Nova Scotia who emigrated from Sierra Leone were not assisted as they needed to be.

Cugoano emphasized the viciousness of slavery and advocated for slave traders to be captured and confined.  Clearly outspoken, he also called William Wilberforce – an English politician, a hypocrite for not taking a stronger stance against slavery.

After 1791, Cugoano’s whereabouts, place and date of death remains unknown.