Despite the dangers associated with skin-bleaching, the desire for some to change their skin tone has anything but lessened.  Many skin-bleaching creams include mercury, cortisone and hydroquinone; chemicals linked to skin cancer, high blood pressure, thinning of the skin, other forms of cancer, and kidney and liver failure.

Yet many women and men are willing to undergo drastic measures to be regarded as desirable and beautiful, including applying skin-lightening creams and lotions to their skin while pregnant. 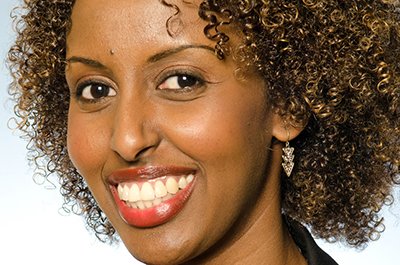 Adawe can often be seen in Karmel Square, a meeting point for Somali immigrants in Minneapolis to socialize and purchase goods from their native land. It is also a prime location for the sale of skin-bleaching products.  Adawe uses her visits as an opportunity to scout and report merchants who still sell the controversial products.

As a county public health educator and a graduate student at the University of Minnesota School of Public Health, Adawe purchased 27 samples of creams in 2011 and had them tested by pollution control agency specialists. Their finding revealed that there were 33,000 parts of mercury per million in the samples given. The Food and Drug Administration only allows one part per million.

Adawe’s actions caused the Minnesota Pollution Control Agency to raid and investigate establishments selling lightening creams. The Minnesota Department of Health then issued warnings about the dangers of skin-bleaching creams.

Mercury is a neurotoxin that eats away at the skin, damages membranes and causes death by poisoning. “Just touching a washcloth or a mother’s cheek that has been rubbed with the products could be harmful to a baby, the FDA notes, interfering with brain and nervous system development.”

Adawe is now a manager for the Children’s Cabinet of Minnesota Gov. Mark Dayton and host of a weekly radio show dubbed “Beauty-Wellness Talk.” It launched in November 2017.  More than being on a crusade to stop the illegal sale of skin-bleaching creams, Adawe feels it’s important to discuss the issues that prompt women to alter their skin in the first place.

Though it is difficult, Adawe is now allowing women to speak out about the underlying issues such as colorism, self-esteem, social media and how the ideas of self-hate are a seed often implanted by one’s surroundings.

Salma Ali, 19, a Somali-American college student reveals,  “Growing up, if somebody in my family was mad at me, they’d call me koor madow, which means, ‘Hey darker-skinned,’” “And it was an insult.” Ali goes on to say, “I’ve had my aunts come up to me telling me, ‘Salma you’re not ugly, it’s just that your skin is just a little dirty. You need to clean it up. I got some products from China. I’mma hook you up.’ I’m like, ‘How is my skin dirty? I’m taking care of myself.’ But because of the fact that I have darker skin, I’m seen as ugly. And that’s just part of the way we’ve all been socialized.”

“My dream is that every woman stops using skin-lightening creams and trying to change their color,” Adawe proclaims. “And that they are happy for who they are.”