The Buganda road court charged the fierce government critic with harassing the president and she was remanded to Luzira Prison until November 9 when she will return to take a plea, reports local media Daily Monitor.

Nyanzi was arrested on November 2 at the Makerere University during a march to the Institute of Social Research (MISR) where she worked as a research fellow before her suspension last year.  The recent march was in protest against the institute’s failure to reinstate her and pay all her salary arrears as ordered by a tribunal last month which was set up to investigate her suspension.

During the time of her suspension last year, the mother of three staged a nude protest outside her locked up office and posted the video and images on Facebook.

Stella Nyanzi is not new to arrests as in April 2017, she was picked up for using abusive words against the president and first lady. She called President Museveni “a pair of buttocks” and insulted the First Lady Janet Museveni who she described as incompetent in her role as minister of education.

In a letter she wrote to a friend from detention which is making the rounds on social media, Nyanzi said: “Writing is a weapon … We shall fight their bullets and bribes with our prose and poetry. We shall defend ourselves with our pens and keyboards.” 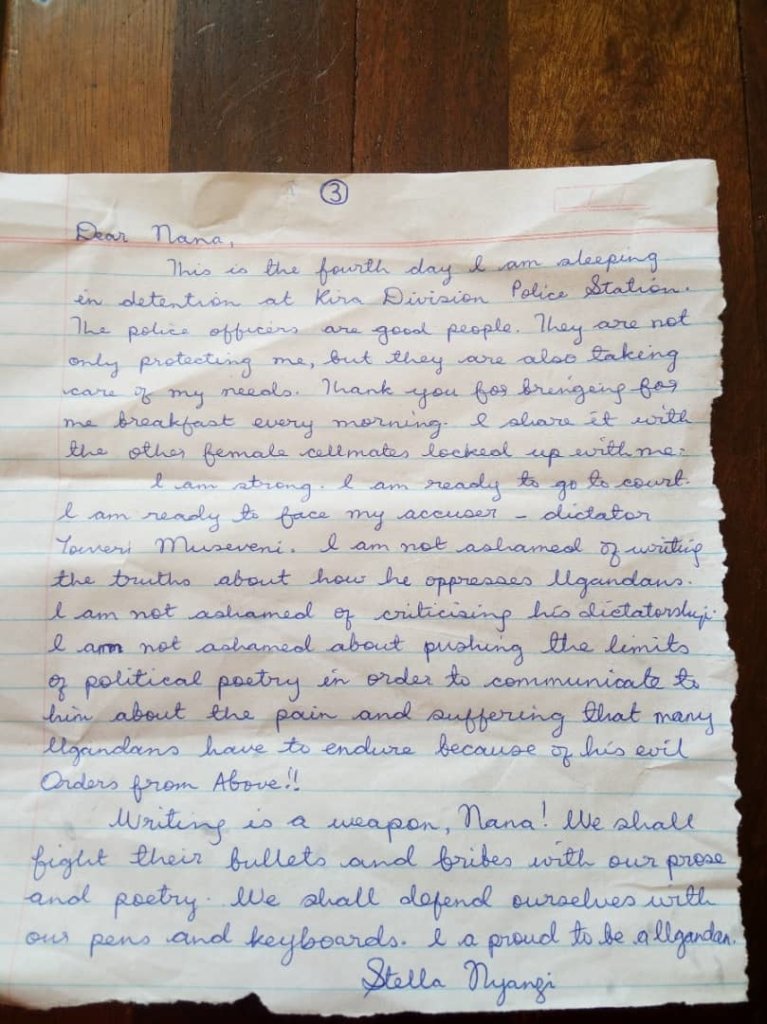 If found guilty, she will face punishment set by the Section 25 of the Computer Misuse Act 2011 on offensive communication which states that, “Any person who willfully and repeatedly uses electronic communication to disturb or attempts to disturb the peace, quiet or right of privacy of any person with no purpose of legitimate communication whether or not a conversation ensues commits a misdemeanour and is liable on conviction to a fine not exceeding twenty-four currency points or imprisonment not exceeding one year or both.”