University Lecturers in Nigeria have adhered to orders from the Academic Staff Union of Universities (ASUU) to embark on what they call a” total and comprehensive” strike  as a result of the Federal government’s failure to implement some core components of the 2009 FGN/ASUU Agreement. 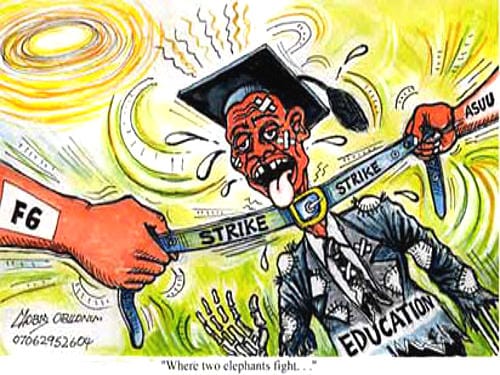 According to the National President of the ASUU, Prof. Awuzie, the Federal Government has refused to honor their requests, even after granting it a 2 months grace period to come forth with a proposal. This is also in breach of the tenet of industrial democracy, which requires that all agreements freely entered into must be honoured.

ASUU has instructed all members of the union to proceed with a total and comprehensive strike as of last night, December 4th 2011.  Prof. Awuzie describes this as “no teaching, no examination or grading, no project supervisions, no lecturers, no appointment and promotion meetings, no statutory meetings, or other meetings directed by government of their agents.”

"The ruling class has failed. It cannot provide jobs, education, healthcare, affordable transportation, roads and so on. It is incapable of uniting the people; it uses ethnic origin as a political weapon. The ruling class violates the integrity of the judiciary.

The faction in power, with President Jonathan as head, is unable to protect the people from hunger, robbery, murder of innocent citizens and generalised insecurity. Politically, Nigeria is in a precarious position in spite of the 2011 general elections.

In recent months, federal government has intensified its campaign for devaluation, privatization and petroleum price increase, which the Nigerian labour movement, including ASUU, shall resist," said Prof. Awudie.