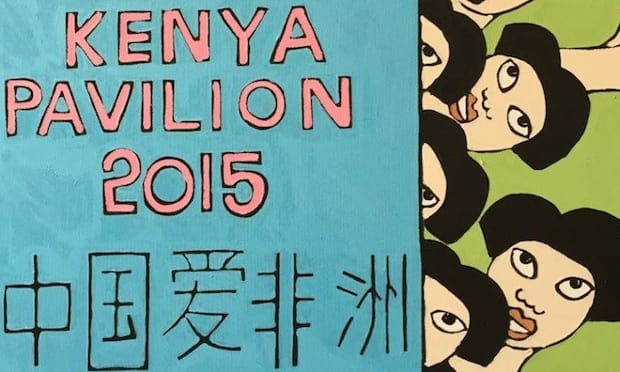 Michael Soi’s “The Shame in Venice”

Tensions between Kenyans and Chinese have once again flared, after the majority of artists chosen to represent Kenya for the 2015 Venice Biennale are Chinese…not Kenyan, reports the Guardian.

The Venice Biennale is a bi-annual international contemporary art exhibition that has been taking place in Venice, Italy, since 1895.

For this year’s selections, of the eight participants, six Chinese artists were selected by Italian curator Paola Poponi.

However, critics of the selections point out that artists Li Gang, Shi Jinsong, and Qin Feng, for example, have reportedly never visited Kenya nor do they reference the East African nation in any of their works.

Olabisi Silva, who was the Nigerian curator for the Venice Biennale in 2013, where 10 of the 12 selected artists for Kenya were also Chinese, recently remarked on her Facebook page:

I was a member of the jury for the last VB in 2013 and really the Kenya Pavilion was shambolic. Full of chinese and italian artists with some kenya artist in a dark room. A monumental embarrassment to the country and to the continent that should not be allowed to happen again. It completely undermined and misrepresented the wonderful work that is coming out of the country. That it would happen again this year is totally frightening and that must not be allowed.

And Kenyans aren’t taking the slight sitting down.

A “Renounce Kenya’s Fraudulent Representation at 56 Venice Biennale 2015″ petition has been created to protest the Chinese selections, reading in part:

For the third time, a group of well connected persons, who lack neither the intellectual nor creative capacity to represent Kenya’s contemporary art to the international arena, are posturing to the world as the Kenyan Pavilion at the 56th Venice Biennial in Italy.

It should be noted that the Venice Biennial carries with it a profound global significance. For Kenya its cultural scene and its contemporary artists, Venice is a big deal and big business.

It brings with it the absolute potential to launch the careers of artists, curators, writers, cultural entrepreneurs, cultural managers, collectors, art educators, patrons – both individual and corporate and many other players to monumental heights.

At press time, the petition has 329 signatures of the requested 500.

In addition, a “Kenyan Misrepresentation” Conference was held in Nairobi’s Kenya Cultural Center this Tuesday, and local artists and curators organized a meeting with Culture, Sports, and Arts Minister Hassan Wario; he reportedly didn’t show up.

Curator Poponi — who has never visited Kenya even though she is officially the commissioner of the Kenyan pavilion — defended her selections for the “All the World’s Future” Biennale in an e-mail to NPR, which was punctuated with capitalized words:

Talking about art FROM ANOTHER PART OF THE WORLD during an art exhibition can be useful for KENYA, always more able to create its OWN IDENTITY.” She said that art should not be constrained by geography and explained in a follow-up email that “MEETING THE REST OF THE WORLD” would enable Kenyan artists to analyze their own experiences “more deeply.”

In response, Kenyan artist Michael Soi, who created the pictured piece called “The Shame in Venice,” said, “For those who don’t know. Kenya has a lot of great contemporary artists who can represent Kenya — artists living in the diaspora and the local gang operating from Nairobi and other towns in Kenya.

“The likes of Wangechi Mutu, Naomi Wanjiku Gakunga, Peterson Kamwathi, Paul Onditi, Richard Kimathi, Jimmy Ogonga, Jim Chuchu… I could go on and on. That Kenyan pavilion is as phony as a 3 dollar bill.”