In Europe, hurling banana at black soccer players has been commonplace; it has been a tool used by racists to express their contempt for blacks, treating them as apes or monkeys. In the United States, another fruit is used to convey a similar message of contempt towards African-Americans: watermelon. But how and when did this racist connection between Black people and watermelons begin to exist?

According to an article in The Atlantic, the racist trope about black people’s alleged insatiable hunger for watermelons came into full force when slaves won their emancipation during the Civil War. Emancipated African-Americans started earning their living by growing and selling watermelons, but the fruit was eventually made a symbol of belittling blacks and their achievements because southern whites were threatened by their former slaves’ newfound freedom. 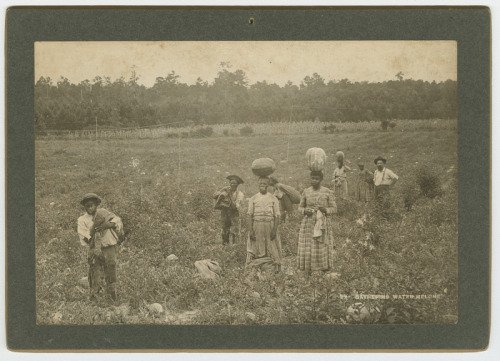 This stereotype was further perpetuated in minstrel shows, an American form of entertainment developed in the early 19th century where theatrical make-up known as blackface were worn by Caucasians to purposely play the role of black people in a ridiculing way. Performers of minstrel usually exaggerated their lips and often wore ragged clothes depicting black as unclean and lazy, given to song and dance and excessively fond of watermelon. 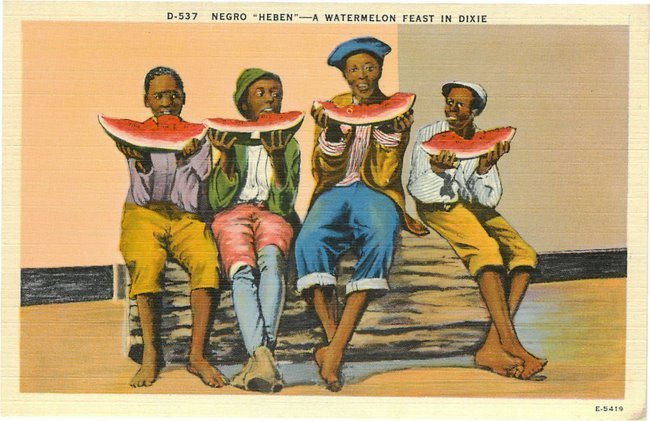 Postcards showing Black people with uncombed hair and ragged clothing comically eating and stealing watermelons from white farmers and plantation masters became popular among White Americans at the time. The characters depicted on these postcards were shown as somewhat simple and lazy, just interested in meeting their immediate needs.

This denigration of Afro-Americans became an important performance tradition in the American theater for countless years. In 1916, a popular song recorded by Harry C. Browne entitled Nigger Loves A Watermelon, Ha Ha Ha! relied heavily on the false belief popularized in the 19th century that African-Americans had an unusual appetite for watermelons. 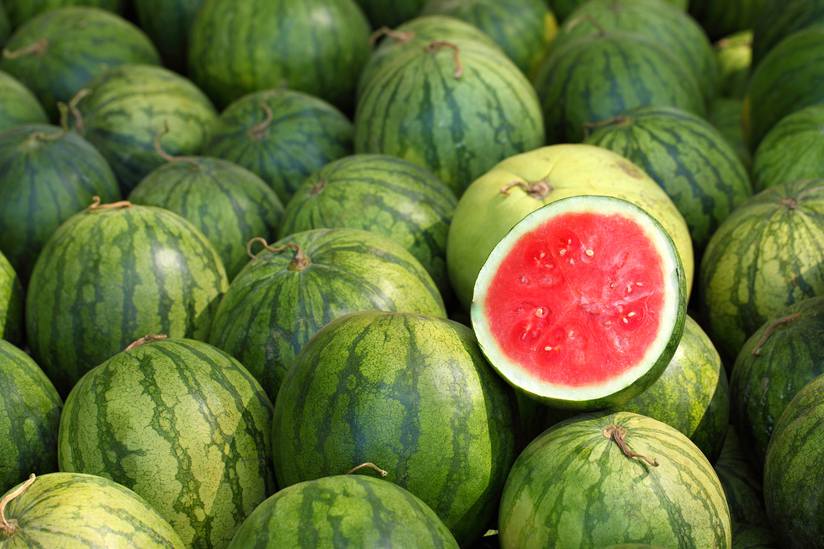 Although the famous minstrel show went to history books many decades ago, this stereotypical association of Blacks with watermelons refused to vanish along with it; it remains a common occurrence in the United States today, nearly two centuries later since it came into existence. Protesters against African Americans still frequently use watermelons to express contempt.

When civil rights leader Rev. Al Sharpton staged protest marches in 1989 and 1990  through the predominantly Italian-American neighborhood of Bensonhurst to protest both the killing of a 16-year-old African-American Yusef Hawkins, and the acquittal of his accused assailant, white counter-demonstrators chanted racist slurs and held watermelons to racially insult Black demonstrators. 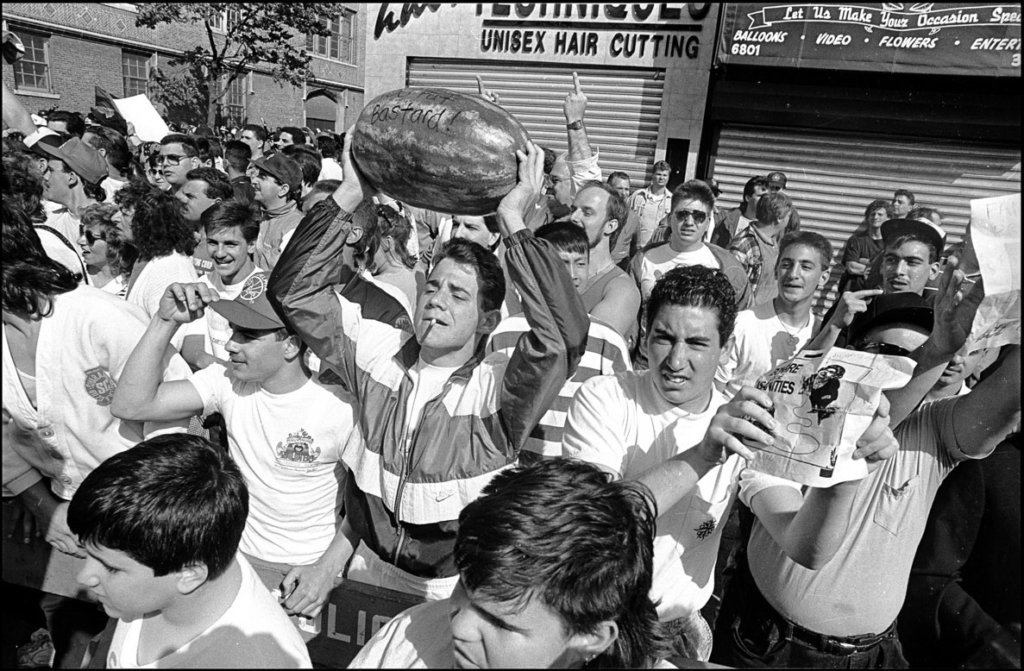 African-American protesters take to the streets in Bensonhurst in Brooklyn after the acquitall of Keith Mondello on the charge of manslaughter in the death of Yusef Hawkings on May 19, 1990 ( Ricky Flores ) Protesters were met by jeers and curses from a mostly Italian community during the demonstration.
http://en.wikipedia.org/wiki/Yusef_Hawkins

Barack Obama endured a number of vicious racist attacks against him since the early days of his 2008 presidential campaigns. His stereotypical imagery of consuming watermelon became the subject of viral emails circulated by his political opponents. Postelection racist images of the President with watermelon continued to be created, some of them by members of the Republican Party.

In February 2009, Los Alamitos Mayor Dean Grose, resigned from his mayoral position after being criticized for sending all his mailing list a photo of the White House surrounded by a watermelon field. The ex-Mayor defended himself that he was unaware of the racial stereotype and that he thought the photo had been sent to his private e-mail account in “humor,” and passed it along to a group of friends and associates.

Some years later in 2012, a man in Kentucky created a roadside display of a watermelon-holding mannequin wearing a President Obama mask. He told the media that he gave watermelon to the Obama statue because it “might get hungry standing out here.” The man also said for him that was just freedom of speech.

That same year, another man in Morgan Hill, California had created a political display featuring an empty chair and two watermelons in a move to express his anti-Obama stance. The display also bore a hand-written message saying, “Go back to Kenya, you idiot.”

Boston Herald and cartoonist Jerry Holbert had to apologize in 2014 for a cartoon that unleashed a firestorm of protest of racism for featuring former President Obama and a reference to the stereotype that African Americans love watermelon. In his apology, the cartoonist said: “I wasn’t thinking along those lines at all.” 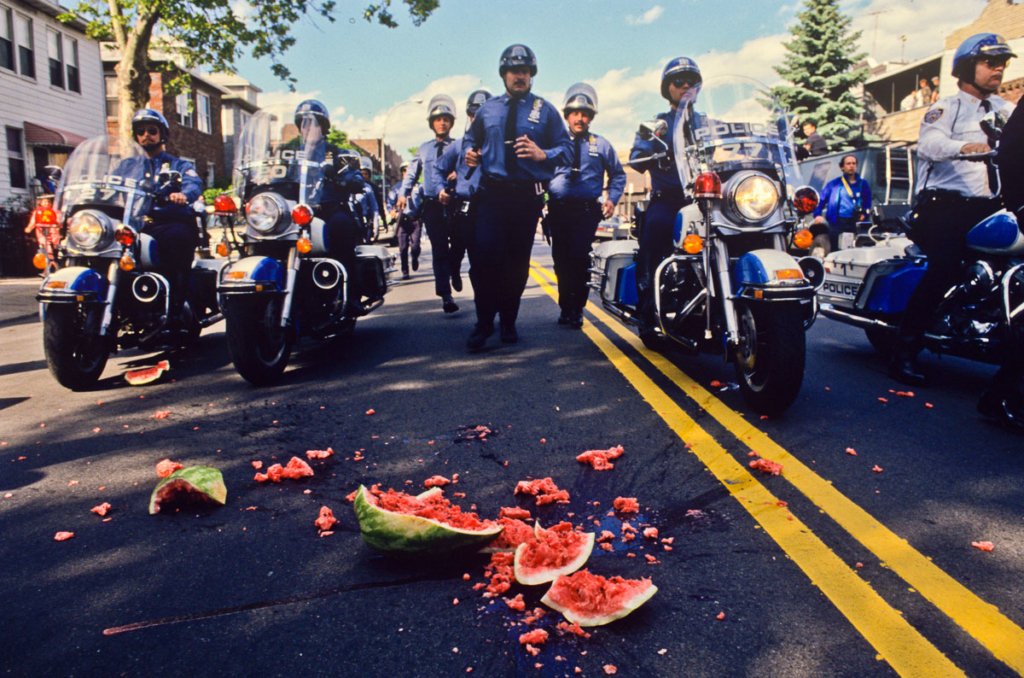 The same year, an author of children’s books had to publicly apologize for making jokes about African-American author Jacqueline Woodson being allergic to watermelon. The author apologetically tweeted that he had clearly failed, and that he was sorry.

Another incident featured a Detroit firefighter who was fired for bringing the gift of a watermelon adorned with a pink bow to a predominantly black firehouse in Detroit in 2017. The man was adhering to a tradition for new firefighters to come bearing gifts when they are stationed in a new firehouse.

Today, black people in America cannot publicly consume watermelons, and this truly makes eating watermelon in public a white privilege (like one author puts it). Unfortunately, watermelon is not the only stereotype associated with blacks in America; they have also long battled misguided stereotypes about their fondness for fried chicken.