As a young black male living in America and growing up in thralls of poverty, I witnessed the continued devastation of black communities hooked up on crack-cocaine. This white powdery substance destroyed a lot of good people, families, social structures, and trust. It left children without parent(s).

Crack houses dedicated to the mental, physical, spiritual, emotional, financial, cultural, and racial destruction of one’s self-worth popped up in black neighborhoods faster than KFC. And ultimately left many people dead or scarred for life in its wake.

Those who managed to try and get “clean” and get their lives back on track, still had to deal with the forever “temptation” of getting hooked again, never completely getting clear of the effects and lasting damage of crack.

As a young African living in America, I saw and learned all too well of the same effect colonialism had, and still has, on Africa and the African diaspora. While one can argue that colonialism was an ideology and system; crack-cocaine was a drug that produces negative chemical reactions to the human body, on a cellular level. So, did colonialism.

Yes, in the beginning, Europeans colonized Africa by force through the use of guns, military campaigns, the buying and capturing of African slaves, and the famous ‘Berlin Conference’ which carved up Africa like a turkey at Thanksgiving dinner.

But it was the mental route the colonialism took, that did, and continues to do the most destructive damage. It started through the missionaries bringing their western version of Christianity and forcing the ideology that Jesus (or prophet Jesus as Muslims know him by) was a white man, and that they “Africans” needed to be saved because of their uncivilized ways.

Europeans also brought with them their pseudoscience and philosophies on race; setting the standards on what beauty meant. With the thorough mis-education, slavery, and colonial rule; Europeans drilled the ill-concept of whiteness as the highest level of purity and blissfulness one could achieve in life. And the more we resisted these destructive racist ideologies, the more they were pumped into our heads through our subconscious; through religious text, school books, and eventually entertainment.

Pretty soon, they didn’t even have to force it on us after a while, because we craved the destructive feeling of colonialism. We sought it at every turn, even if we didn’t want to.

Now you may say, abeg, white people were affected by crack and colonialism. Ah, this is true oo, but who has it affected the most? Who is still far behind in many areas? Who continues to strive to do better, and make a life for themselves after experiencing devastating trauma? Africa and its diaspora.

Here’s the thing, the Irish were eventually brought into the fold of whiteness while they have had their differences with Great Britain from across the way. They still managed to keep a sense of who they are as a people, their heritage, and sense of self. They take pride in their country, and despite some historical setbacks, they are doing very well as a people and a country. The negative stereotypes that were attributed to the Irish don’t really exist anymore.

Like the whites in America who are affected by crack, the white powdery substance gave them the label of crackheads and left a good number of them in bad situations. But they were eventually able to escape negative connotation associated with being on crack. White neighborhoods with their crack-dens, dealers and addicts didn’t get nearly the same treatment as the black and brown communities did when it came to the “War on Drugs”.

The negative stereotypes of being labelled a “crackhead”, or “crack baby” didn’t stick to white people (especially after they tried to get clean). I mean, look at how the opioid-crisis is being treated now that it is affecting white Americans in insanely large numbers. When addiction looked black, it was a choice and when it’s white, it’s a disease.

Colonialism is such a hard drug to kick, so hard that even the most esteemed and ardent African and black nationalists such as Marcus Garvey, Malcolm X, Kwame Nkrumah, Amilcar Cabral, Patrice Lumumba and so many others couldn’t rid the colonial addiction from the clothes they wore, colonial languages they spoke (French, English, Portuguese etc.), and much more.

Hell, I myself I’m a proud Ghanaian and Pan-Africanist; but I’m addicted to pleasurable delights of colonialism when I see western films superior to African films. Colonialism, like crack, stripped everything (even our skin color) from us; our cultures, language, true spirituality, religions (yes, Africans followed true Hebrew, Islamic, and Christian faiths before the Europeans came), style of dress, food, medicine, education, knowledge, and sense of self. They replaced it with what THEY thought we should be; their servants, property, target practice, sex objects, experiments (of all kinds), and mirrored subjects that soaked up Eurocentric beliefs and views.

Now centuries later, after thinking we have mostly kicked the habit of colonialism (or at least convincing ourselves we have), we readily take the synthetic drug, neo-colonialism. We pop it like it’s the new opioid. And damn it makes you feel pretty good too. That colonial high will have you thinking, you are the truth with your multiple degrees; liberal-progressive views are the only set standard of living. It has fellow Africans and black folks joking about how we show up HOURS late to an African/Black event or meeting but dare not show up late to a non-black embellishment or event. 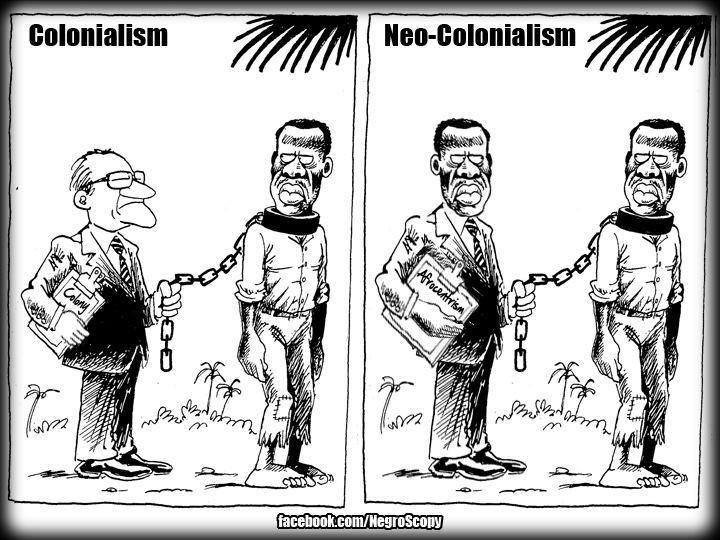 Nevertheless, like any drug addict, Africans of the diaspora need to admit we ALL have an addiction to (neo)colonialism in all its forms. We mustn’t fool ourselves into thinking just because we may wear our hair natural, start becoming pro-black as f*ck, or love fufu over McDonald’s, then, somehow, we are still not heavily colonized and addicted to ‘crackolonialism’ (I just made this word up).

Once we truly acknowledge the addiction and general dependency on this destructive drug and how it is holding us back from reaching our TRUE potential, then we need to spend the next decades (because we may not have centuries) to get clean. We must do whatever it takes to get rid and possibly stay off this drug called colonialism. It will be hard to kick, but with our strength and intelligence, we can beat this habit.