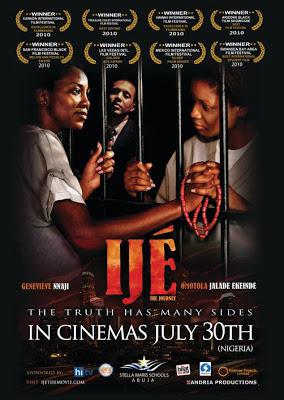 IJÉ the Journey, the highest grossing film in West Africa and the most successful film in the history of Nollywood.

Movies are made for the cinemas first before other forms of distribution and cinemas or movie theaters made Hollywood the film capital of the world buoyed by over 38,605 indoor screens in 5,561 sites and 628 outdoor screens in 381 sites in the US, the largest in the world.

Nigeria is the most populous country in Africa with an estimated population of over 160 million people, over 95 million of them use GSM phones, the largest in Africa and millions of them are using the Internet on their mobile devices and PCs ; thus making Nigeria the digital media hub of Africa.

The emergence of Nollywood, the Nigerian film industry has made movies very popular among the millions of Nigerians and foreigners. Nollywood movies have not only become popular collector’s items at homes in Nigeria, but also in other African countries and in the Diaspora making Nollywood one of the largest film industries in the world due to the proliferation of home videos by both the legitimate distributors and the elusive and pervasive pirates at large.

According to a UNESCO report published and posted on the website, the most recent UIS survey results released in 2009 showed that India remains the world’s leading film producer, but Nigeria is closing the gap after overtaking the United States for second place. According to the UIS survey, Bollywood produced 1,091 feature-length films in 2006 compared to 872 productions (in video format) from Nigeria’s film industry, which is commonly referred to as Nollywood. In contrast, the United States produced 485 major films.

The survey noted a unique perspective on how different countries and regions are transforming traditional approaches to the art and industry of film-making especially in video and digital formats.

Of course we cannot compare Nollywood videos made on low budgets to the huge budgets of Hollywood films. But the popularity of Nollywood movies has made MNET’s Africa Magic channel the favourite of millions of cable TV subscribers and launched the first Nigerian million dollar online cinema Iroko TV dubbed "The Netflix of Africa" with over 500,000 subscribers and over 100 million visitors so far.

And this phenomenal growth of Nollywood has challenged many Nigerian filmmakers to improve the professional quality of their movies to compete with those made in Hollywood and Bollywood in world class standards. Some of them have gone as far as attending popular American film schools to learn both the skills and tricks of the trade and have produced some Hollywood standard movies like Chineze Anyaene's IJÉ the Journey, Jeta Amata’s Amazing Grace, Black November and Emperor: The Story of Toussaint l'Ouverture, Stephanie Linus’ Through the Glass, Kunle Afolayan’s The Figurine, Faruk Lasaki’s Changing Faces and others making headlines and winning awards at international film festivals. But none of them has made the official selection or qualified for the competition at the prestigious Cannes Film Festival where underdogs and dark horses from developing countries have been given the opportunities to attract major distributors in the U.S. and Europe; and no Nigerian film has even qualified for the Foreign Language Film category of the Academy Awards, the ultimate zenith for ambitious filmmakers all over the world where South Africa has been nominated and where Tsotsi won the 2005 Academy Award for Best Foreign Language Film and was nominated for the Golden Globe for Best Foreign Language Film in 2006. 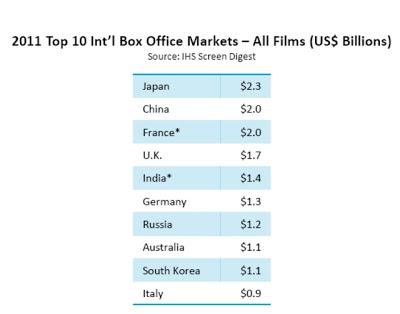 And I have deliberately noted the remarkable achievement of South Africa, because this is an African country not known for churning out thousands of home videos and bragging about them, but better known for making world class films in quality and not in quantity. Therefore, Nigerian filmmakers should learn from the trail blazing South African filmmakers.

Some of the ambitious Nigerian filmmakers have featured notable Hollywood actors and actresses and also used some Hollywood crew in their films to attract the attention of major film distributors in the US and UK, but featuring African American or Caucasian American and European actors in Nigerian movies is not the short-cut to breaking into Hollywood. You can only make it by making world class films telling extraordinary tales like the outstanding foreign films at American cinemas and grossing millions of dollars at the box office this year.

Nigeria's Nollywood is only best known globally as the second largest industry for home videos by mediocre producers and notorious for the piracy of American films. In fact, Nigeria is not even in the 2011 top 10 international box office markets outside the U.S. And many of the stakeholders in Nollywood continue to compete for bragging rights over how Nigeria is the second largest producer of movies in the world instead of admitting that Nigeria is not even a major box office market. No Nigerian film is even listed among the best 100 foreign films so far and the list includes non-Western cultures of Africa, India, China, Japan, Iran and the Middle East, Native American, Mexican, South American, and Caribbean.

According to the duly verified reports of the Motion Picture Association of America (MPAA):
"Foreign films simply don't play with American audiences. On average, foreign-language movies make up less than 1 percent of the U.S. box office," said Paul Dergarabedian, President of the box office division of Hollywood.com.

The following report on Hollywood box office by Foreign Policy is a comprehensive analysis of the challenges of foreign movies in the U.S. market and noted that Hollywood productions still do far better than foreign films in their home markets.

"We've tried to dub, but then the critics kill you — and these films play to audiences that pay a lot of attention to reviews," says Mark Gill, the former president of Warner Independent Pictures.

Because investors don't expect foreign films to play well in the United States, still by far the world's largest and most important film market (China and Japan are vying for second place, but each brings in about one-tenth the combined U.S. and Canada box office), they don't get the same production and advertising budgets that Americans do. At the same time, broadcast television networks refuse to buy foreign-language products, leaving a crucial player in film financing absent when it comes to assembling the kind of multi-source deals that get most non-studio pictures made these days.

We have a Lebanese film opening in the spring, Where Do We Go Now?, and in Lebanon it's about to become the top-grossing film ever, beating Titanic," says Tom Bernard, co-president of Sony Pictures Classics, one of the few companies that continue to back foreign releases in the U.S. Despite this, it will only open on 10 screens here, he says — compared with 3,000-4,000 for major studio releases.

Production values for American films are vastly superior to foreign ones, helped by budgets that can exceed $200 million (100 times the price of many foreign films, and at least 30 times the estimated $6 million-plus budget of Where Do We Go Now?)

There's a strange paradox at play here: While Hollywood films are losing audiences at home, where they're increasingly being siphoned away by social media, games, and the Internet, they're building them abroad. Revenues from American films outside North America constitute more than 60 percent of each year's take by the Hollywood studios, a number that's risen from under 40 percent several decades ago. Paramount Pictures, for instance, made $3.21 billion of its total $5.17 billion earnings in movie theaters for 2011 abroad. This is despite the fact that foreign-made films are gaining an increasing share of their own industries: Japanese are seeing more Japanese films than ever; so are Russians, Chinese, and Koreans. Box office is simply growing across the board in those countries.

Without a strong export market, countries such as China are likely to resist American pressure to deal with the single biggest threat to studio revenue — piracy — which has grown rampant thanks to websites operated everywhere from Nigeria to Ukraine. One 2007 study estimated that the U.S. loses $58 billion per year to piracy of movies, television, music, and other intellectual property, and the studios are terrified this will kill their business if it increases. The newly signed deal between the United States and China, allowing more U.S. movies to be shown there, was hailed as revolutionary, adding 14 to the present 20 films that can be screened in that country each year. (The deal has the important caveat, however, that the films be in IMAX or 3D.)

The successful French movie The Artist made in classic Hollywood style black-and-white about a silent star's fall from grace and subsequent return to fame became the first non-Anglo-Saxon film to win the Best Picture at the 2012 Academy Awards and made over $44,671,682 in North America alone. It was nominated for 10 Academy Awards and won five, including Best Picture, Best Director for Michel Hazanavicius, and Best Actor for Jean Edmond Dujardin making him the first French actor to win the Academy Award for Best Actor.

Another notable successful foreign movie The Intouchables has made $13 million at the U.S. box 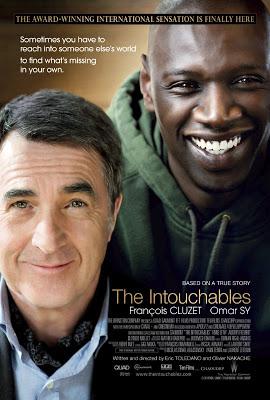 office since its release in May 2012. And other foreign movies coming up at the U.S. box office include Jacques Audiard's Rust and Bone, opening in Los Angeles on Dec. 7, and Michael Haneke's Amour, opening Dec. 19. Haneke got his Hollywood breakthrough after winning the Palme d'Or twice at the Cannes Film Festival in 2009 and 2012.

Each international region enjoyed growth in 2011 with the Chinese box office growing by 35% and making it the second largest international market after Japan. And the international box office in the U.S. also grew by 35% in over five years boosted by impressive growths in various markets, including China and Russia.

Hollywood studios have started to invest in foreign films, and companies such as Sony and 20th Century Fox have established divisions that finance "indigenous" film-making (Hollywood parlance for foreign films), but these films are generally restricted to release in their own countries or ones with the same language, like Sony's co-financing of the Bollywood movie Saawariya and Warner Bros with the Hindi film Chandni Chowk to China.

Michael Chima is a prize winning Nigerian writer and an expert on Nollywood and the film industry. He is the Founder/Festival Director of Eko International Film Festival, Founder/CEO of Screen Outdoor Open Air Cinema (member of the Projection Foundation), author of Children of Heaven, Scarlet Tears of London, Bye, Bye Mugabe, In the House of Dogs, The Prophet Lied and other books. He is also the most prolific African blogger.