For many years now Somalia has been on a steadfast decline since it was thrust into anarchy in 1991, and by anyone’s reckoning, the severity of the current tragedy has been aggravated by the repercussions of 20 years of war and instability. 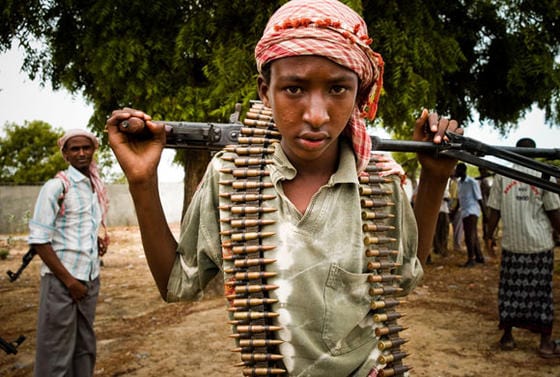 The latest drought in the Horn of Africa has dwindled away any hope that Somalia will ever make it as a nation state. It is the worst drought in northeast Africa in 60 years and it has brought more chaos into the country, and the unwanted flight of thousands who have made that perilous journey across the dessert, to neighboring Kenya and Ethiopia, in the hope of finding scraps to eat.
Drought alone however is not the only factor- civil conflict has been the preeminent contributor to the plight of Somalia.

Drought has always been a persistent feature of the Horn. According to the World Food Programme, changing weather patterns have made droughts common in the region.
Starvation is an unequivocal consequence in times of war-especially if resources are limited to begin with.

In 1973 famine occurred in Ethiopia during the coup of Emperor Halie Selassie, and again in 1984 when Col Mengistu Haile Mariam’s government fought the Tigrayan rebels. In 1992 Somalia was inebriated by a food crises that occurred after president Barre was overthrown in 1991 and the country plummeted into chaos.

Currently, the lack of humanitarian access to certain parts of the country as well as a sharp rise in food prices has exacerbated the famine. According to the UN, more than 10 million people are in need of food- in 1992 that number was more than 23 million, and yet it seems the situation today is worse than it was 19 years ago.

The Islamic insurgents that are in control of the country have not been accommodating to aid workers. The problem is made worse by ongoing conflicts and limited access for humanitarian aid agencies.

In 2004 politicians signed a deal to set up a parliament, that in 2009, elected Sheikh Sharif Sheikh Ahmed, a moderate Islamist and former rebel, as president. This fragile administration has struggled to unify a country that has been devastated by 20 years of civil conflict.

With help from the UN and African Union troops, Ahmed’s government controls a contemptibly small area of the country-a few blocks of the capital, Mogadishu. The rest of the country is under unyielding control of al-Shabab, an Islamic militant group that declared allegiance to al-Qaeda.

Al-Shabab’s rise to power in 2006 compromised the authority of the government. The group fought against government and Ethiopian forces and drove out rival insurgent groups in 2008 to gained control of most of southern Somalia. After driving its main rival Hizbul Islam, out of the southern port city of Kismayo in 2009, Al-Shabab became the most powerful insurgent group and since then has been moving forces up towards Mogadishu.

Al-Shabab imposed an aid ban, restricting all foreign aid organizations, which the group believes are Western spies and Christian crusaders. This aggravated the state of many starving Somalians who could have benefited greatly from foreign aid.

The ban has been reversed. However, this occurred after half the population was on the brink of starvation and thousands had fled to neighboring countries for refuge. The ban included the United Nations Development Programme, World Food Programme and CARE International. Both the US and the UK describe al-Shabab as a terrorist group.

Assistance from the Rest of Africa:
After criticism from the African media of the failure of the continent’s leaders to help famine victims, the African Union announced, on July 31, that it would have a pledging summit meeting.
The purpose of the pledging conference is to bring together heads of state and international donors. Erasmus Mwencha, the deputy chairman of the African Union, made the announcement during a visit to the AU peacekeeping mission in the Somali capital, Mogadishu.

"I ask the African continent, from the northern cape to the southern cape, to look hard at how they can contribute to alleviating the suffering," said Mwencha.