Marie Van Brittan Brown, an African-American inventor in 1966 teamed up with her husband to devise the home security system. The closed-circuit security system monitored visitors via camera and projected their images onto a television monitor. If the homeowner was concerned about the person at the door, there was a panic button that could be pushed to contact the police immediately.

Brown’s system had a set of four peepholes and a camera that could slide up and down to look out each one. Anything the camera picked up would appear on a monitor. A radio-controlled wireless system would transfer the image to a monitor, or set of monitors, placed anywhere in the house.

At the monitor, a homeowner could see who was at the door. He or she could also talk with that person via a set of two-way microphones. The security system also had a remote control option that enabled homeowners to lock or unlock the door from a safe or convenient distance. 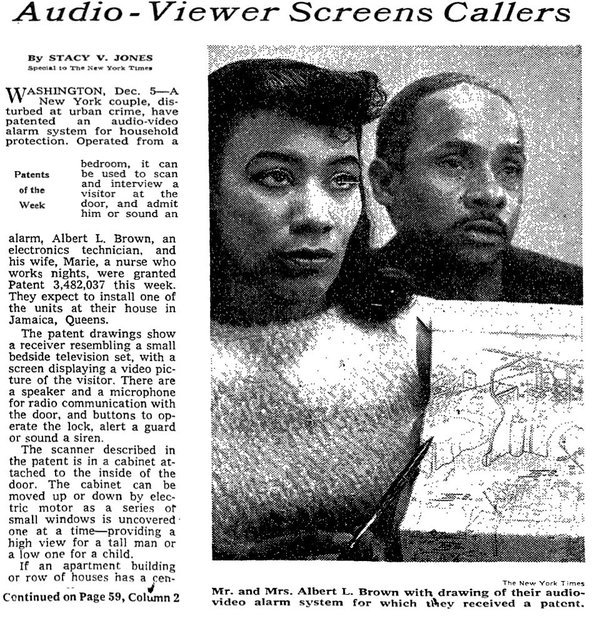 Marie Van Brittan was born and raised in Jamaica, Queens in New York City in 1922. As a nurse, she worked long, late hours before coming back home. Her husband, Albert Brown who is an electronics technician was often away many nights.

When Marie was home alone at odd hours, she felt very worried as the crime rate in the neighbourhood was increasing. Meanwhile, the police were slow to respond to emergency calls. Marie decided to take matters into her own hands, thus, she invented the modern home security system.

A patent application was filed on August 1, 1966, under the names of Marie Van Brittan Brown and Albert L. Brown, both of 151-58 135th Avenue, Jamaica, New York. Three years after filing, Brown was awarded her patent on December 2, 1969.

Brown’s security system brought “CCTV” use into the home. Over 50 years later, the technology is installed in millions of homes and offices across the world.