Exiled former Gambian President Yahya Jammeh has released photos of him working on an unidentified farm in Equatorial Guinea, where he has been hiding since he unceremoniously left office in January.

In one of the pictures, Mr. Jammeh can be seen clearing a bush with a machete in the company of an unidentified man, while in another one, he is in the company of Equatorial Guinea President Teodoro Obiang Nguema Mbasogo.

Dressed in his trademark all-white attire, the ex-Gambian leader is seen inspecting crops on what some people allege to be President Mbasogo’s farm. 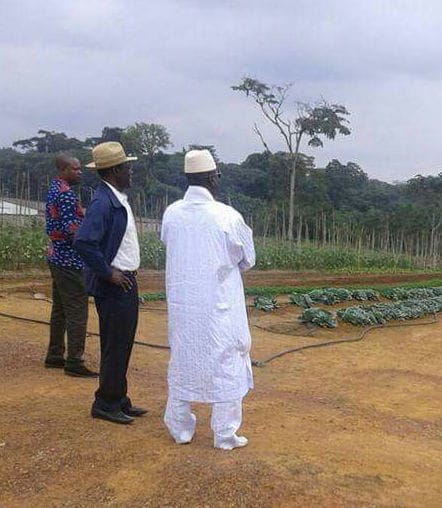 Ex-Gambian leader Yahya Jammeh in white attire with the President of Equatorial Guinea Teodoro Mbasogo with a hat. Photo credit: Club of Mozambique

It is his first appearance since he went in to exile following weeks of refusing to step down for the new president of Gambia, Adam Barrow, who defeated him in the December election.

The pictures have caused a storm on social media platforms as people express their disappointment at the exiled leader:

“Only a couple of months and the man has lost so much weight like he was feeding on slim tea,” Lili Precious wrote of Facebook.

Some have mockingly advised him to change his iconic white attire as it is not fit for farming, while others have wished him another 22 years of farming, in reference to the 22 years he served as president:

“Let them watch him properly or else he will be cultivating marijuana. He is a known drug dealer,” Progress Gambia Gambia wrote on Facebook. 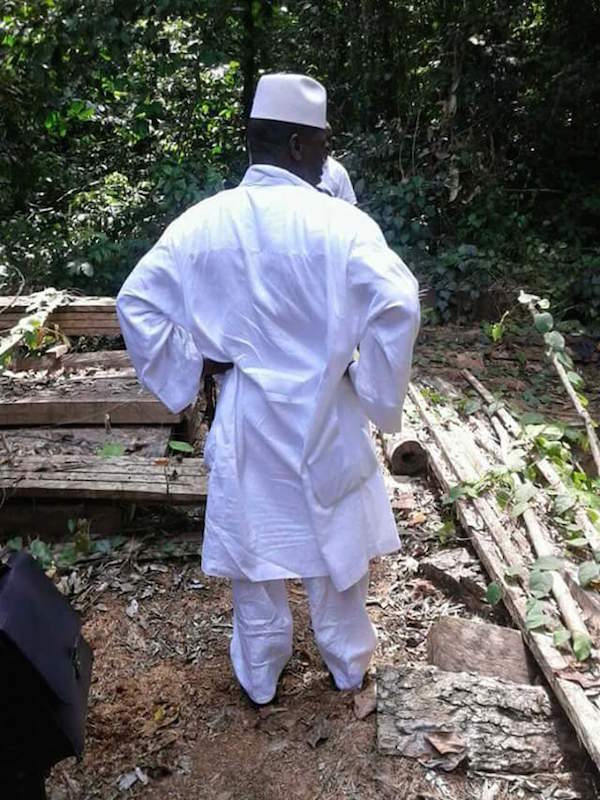 But some of his supporters assured him of their support, even congratulating him on his newfound career in farming. Others say they already miss him:

“A good move by the former president of Gambia,” Adewunmi Benjamin also wrote on Facebook.

Birds of a Feather

Some critics have condemned President Mbasogo for hosting Mr. Jammeh who is accused of emptying his country’s coffers before fleeing.

Last month, two senior ministers in the new Gambian government accused the former president of stealing billions of dollars from the state’s coffers and leaving the country with a debt of more than $1 billion.

“During the impasse I made mention of $5 million, but that is just a drop in the ocean compared to what the Ministry of Finance revealed,” Gambian Interior Minister Mai Fatty said during a press conference last month.

Meanwhile, President Mbasogo has also had his fair share of criticism, with some accusing him of practicing dictatorship and corruption.

The 74-year-old president has been in office since 1979, making him one of the longest-serving presidents in Africa.

President Barrow has vowed to hold Jammeh accountable for the misappropriation of public funds and murders allegedly committed during his reign.