No less than 18 people — many of them students — lost their lives in Ghana Sunday, after a huge tree fell on them at the popular Kintampo waterfall.

Strong winds and a heavy rainstorm apparently caused the accident at Kintampo waterfalls, when a large tree fell off of the waterfall and then fell on top of those who were swimming in the river below, trapping them underneath, according to Citi News. Witnesses say the tragedy occurred at about 4:30 p.m. local time.

The authorities say 12 of the dead were pupils of Wenchi Secondary School, which is less than 100km from the waterfalls. The school’s head teacher, Foster Boateng, told reporters that the students were on an excursion to the northern region of the country.

“We decided to finish it all at the Kintampo waterfalls, so some of the children decided to taste the swimming aspect of it,” Boateng said.

“The trees started coming down, so in an attempt to escape, some of them fell and they were trapped by the trees. Those who succeeded in climbing the staircase up to pack in to the bus got trapped…by other trees that had fallen down.”

In addition to the 12 pupils who died were two students from the University of Energy and Natural Resources, a school administrator, and three other visitors to the falls.

A spokesman for the fire service said 18 people were killed at the scene while two others died at the hospital. About a dozen more persons sustained varying degrees of injury and were being treated at the local hospital.

Rescue workers, including the police and fire service, reportedly used chainsaws to cut through the fallen tree and free those trapped underneath. 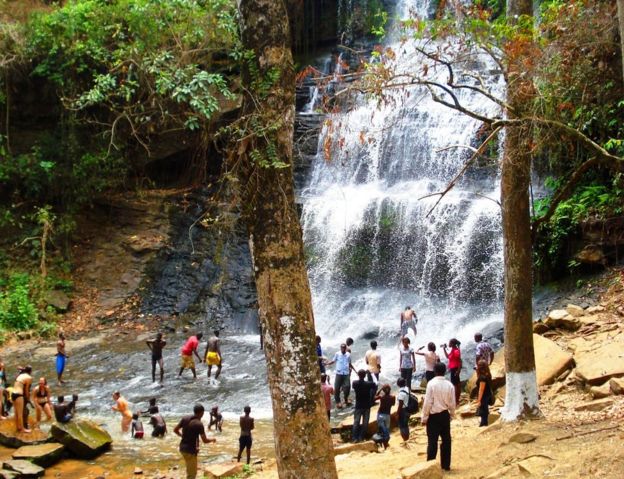 Located in Ghana’s central Brong-Ahafo region, 400km from capital Accra, the Kintampo waterfall is one of the top tourist destinations in the country. Its 70-meter-high three-stage waterfall is surrounded by huge mahogany trees, making it popular with young people, students, and revelers.