Many have seen these iconic photos from the Civil Rights movement of the 1960s. In fact, they have resurfaced on social media with new vigor. Yet, few people know the powerful woman who “threw the side eye that changed the culture” and her story. 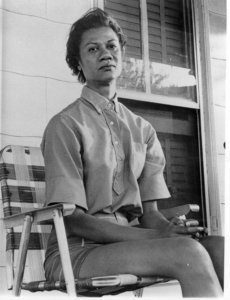 Gloria Richardson on her porch in Cambridge MD 1963

Gloria Richardson Dandridge was born Gloria St. Clair Hayes on May 6, 1922, in Baltimore, Maryland. She grew up in Cambridge, Maryland and came from the wealth and politically inclined, St. Clair family. The family owned a successful grocery store, funeral home, and several rental properties; Richardson’s uncle was a lawyer in the state of Maryland and her grandfather was the first African American on the Cambridge City Council.

Brilliant, Richardson went to the prestigious Howard University at 16 years old. There, she studied sociology and began participating in civil protests. Although some questioned her commitment because she was both wealthy and woman, this did not deter her.

Upon graduating, she worked for the federal government in Washington DC, then returned to Cambridge after the end of World War II. When she returned to Maryland, sources say the Maryland Department of Social Services, for example, refused to hire her or any other black social workers, so she resigned to raising her family. 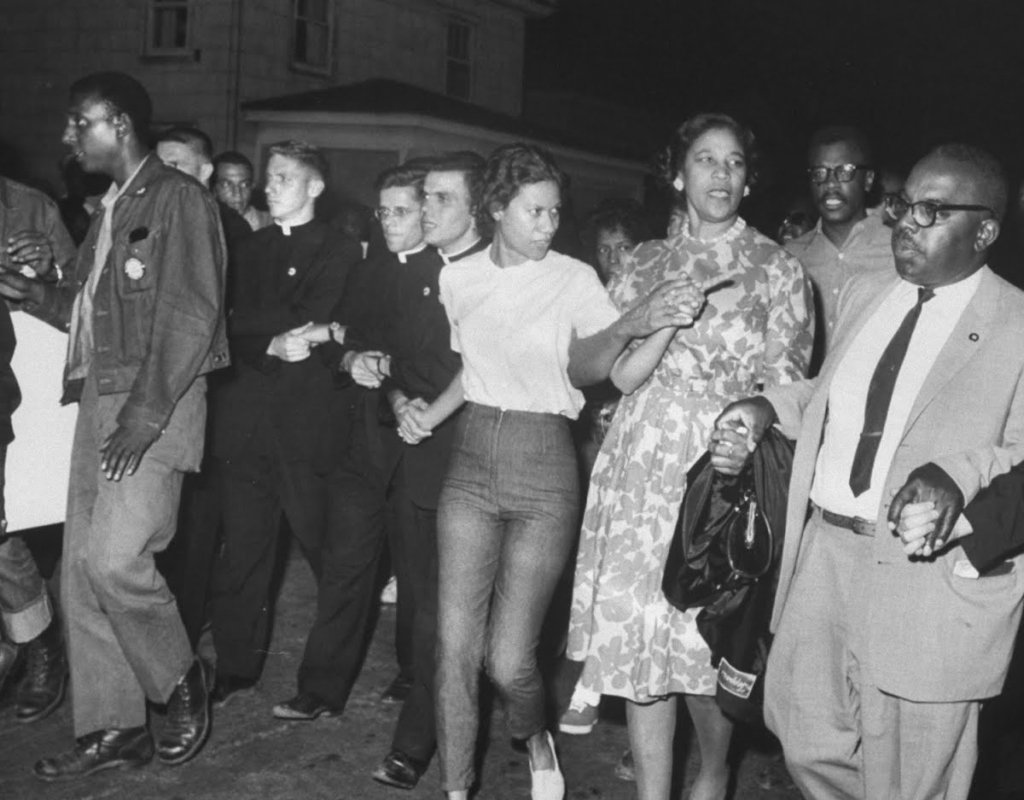 Protests in Cambridge in 1963

Richardson’s life then took a turn and she once again came to public activism because of her daughter. In January 1962, members of the Student Nonviolent Coordinating Committee (SNCC) were sent to start civil rights activities in Cambridge. Richardson’s daughter, Donna, became involved with SNCC, and Richardson lent her support as a parent. This led to the founding of the Cambridge Nonviolent Action Committee (CNAC), the only affiliate of the SNCC that was not student-led. Richardson was tagged to be the organization’s leader. It is through this role that Richardson became a leader of the Cambridge Movement, the first civil rights effort to take place outside of the Deep South. 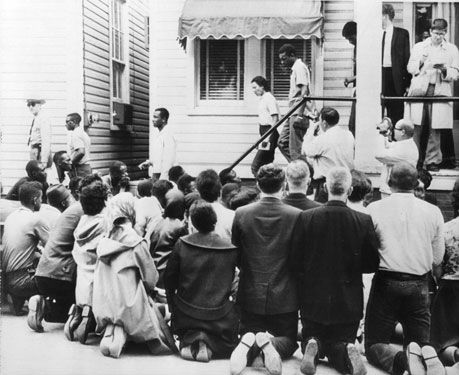 In her leadership, Richardson espoused the need for economic justice and desegregation for Black people in Cambridge. Although her own family was well-off, Richardson understood “the need to improve the economic situation for African Americans in Cambridge, who had an unemployment rate approaching 50 percent, several times higher than the rate for the white population”.

Richardson also believed that the movement could involve tactics beyond nonviolent demonstrations although Martin Luther King Jr. and other leaders of the Civil Rights Movement wanted activists to use nonviolence. The especially brave and courageous leader was quoted as saying, “Self-defense may actually be a deterrent to further violence. Hitherto, the government has moved into conflict situations only when matters approach the level of insurrection” in 1964. 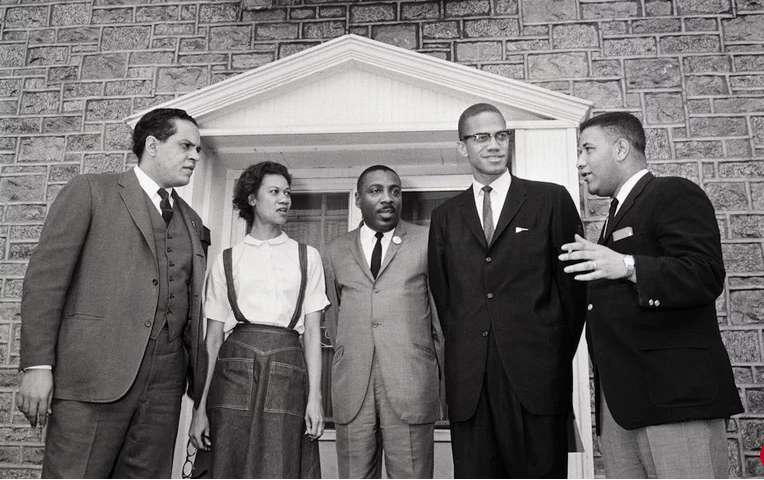 All historical accounts point to the fact that Richardson was instrumental in making Cambridge a hotbed of the Civil Rights Movement. With Richardson at the helm, CNAC staged marches, boycotts, and sit-ins, often leading to clashes with police in 1963. Some of her and the Movement’s most iconic photos, including those below, came from this time. 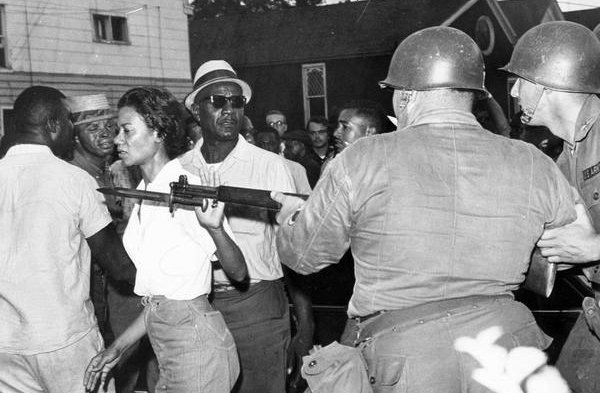 Gloria Richardson pushes away the bayonet of a National Guardsman during a protest in Cambridge, Md., in 1963. Source: The Root

According to The Root, things got especially violent in Cambridge with violent clashes between whites and blacks and burning buildings in June 1963.

“It was like a little war, really. In a certain period of time, it was almost every night,” Richardson recalled to The Root.

In fact, one night in June 1963, shots are exchanged and the governor of Maryland declared martial law. He then sent the National Guard to the city where they would remain for more than a year, the longest martial law occupation in the U.S. since the end of Reconstruction. 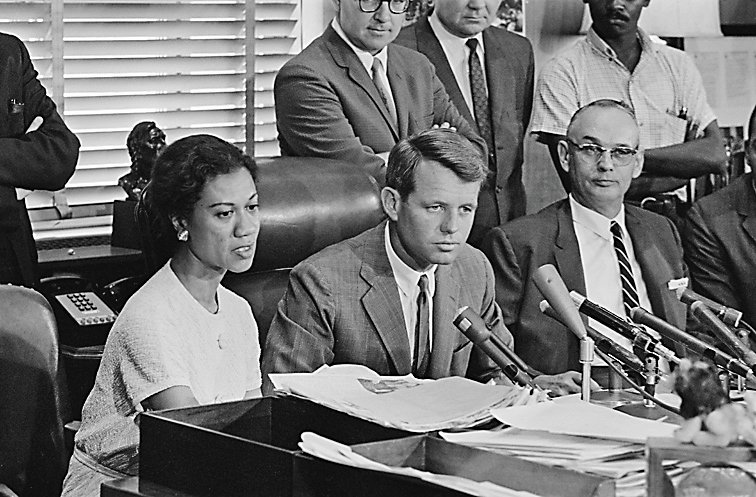 So tense was the situation in Cambridge that then U.S. Attorney General and later president Robert Kennedy, intervened, attempting to negotiate a “Treaty” with Richardson and other leaders. Kennedy called on the city council to desegregate schools and public accommodations in July 1963 but white segregationists called on the Treaty to be put to a vote. Although black people could vote in Cambridge, Richardson and the CNAC boycotted the vote, angry that civil rights should not be put to popular vote. This meant that referendum passed due to low Black turnout, allowing segregation to continue in Cambridge until the 1964 Civil Rights Act was passed.

Despite the seeming ‘loss’ in 1963, Richardson continued the battle. She was invited to the historic March on Washington, where she was one of six “Negro Women Fighters for Freedom” on the program but unfortunately, she was not allowed to speak. Still, the following year, she led a protest when Alabama’s segregationist governor, George Wallace, visited Cambridge. In fact, so impactful was Richardson’s leadership and advocacy for Civil Rights that the National Guard only permanently withdrew from Cambridge in July 1964, when Civil Rights Act became law.

It is then that Richardson resigned from CNAC and relocated to New York City where she worked for the National Council for Negro Women and the New York City Department for the Aging.

Since, Richardson has been especially vocal about the plight of women in the Civil Rights Movement, helping to bring to light the unfortunate encounters of sexism in Black activists groups in the fight for civil rights. She recounted how women of the Civil Rights movement were silenced and overlooked to Democracy Now five years ago.

Watch the 96-year-old year old tell her story in her own words to Kisha Petticolas of the Eastern Shore Network for Change in the interview below.