In many African countries, people with albinism often face discrimination and prosecution due to the way they look. In Zimbabwe, as part of efforts to curb the stigmatization and instil confidence in girls with this disorder, the country has organized its first “Miss Albino” pageant.

The event which took place in Harare on Friday evening saw the winner – Sithembiso Mutukura – taking home US$85 in prize money.

The 22-year-old who beat 12 other contestants to claim the crown said she is hopeful that her achievement will inspire others living with the genetic disorder.

“The people with disabilities are always looked down upon even in schools. I have gone through a lot but I want people living with albinism to be brave and persevere in life,” the social work student at the University of Zimbabwe told the AFP.

“We must continue to advocate for our rights and I hope my win will empower the girl child. People with disabilities must not look down upon themselves.”

Pageant organizer Brenda Mudzimu said the event which was postponed last year due to lack of funds is hoping to go international. 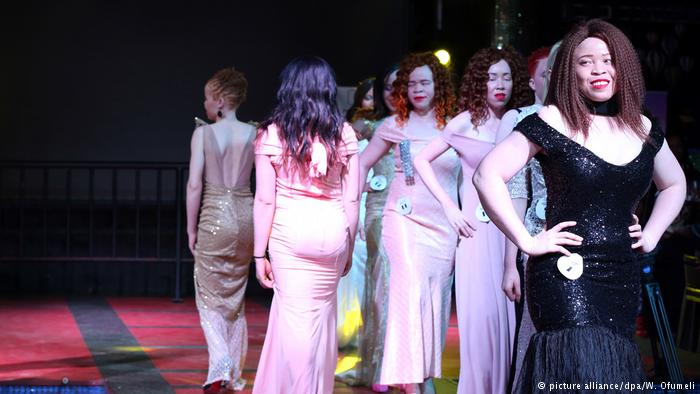 The contestants modelled in their gowns — dw.com

The contestants during the event had to respond to questions on stage and model in gowns and traditional African robes.

Friday’s pageant held at a nightclub makes Zimbabwe the second African country after Kenya to host such an event.

Zimbabwe has about 39,000 people living with albinism, according to the pageant organizer.  The genetic disorder prevents skin cells from producing melanin, resulting in abnormal pigmentation of the skin, eyes and hair. People with the rare condition also have vision problems and are at risk of getting skin cancer.

Apart from being stigmatized, people in this condition are often attacked and even murdered. Their body parts are sold to witch doctors following the belief that albinism can bring magical powers and wealth.