Thursday, March 8, 2018, was International Women’s Day but Cameroon women could not celebrate the day following what they described as the indiscriminate killings and human rights abuses of protestors in the Anglophone regions of the state.

More than 100 of these women, led by the national coordinator of Cameroon People Party (CPP), Edith Kahbang Walla, marched on the principal streets of Yaounde on Thursday in protest of the situation.

Holding brooms, the women said they wanted a meeting with President Paul Biya to discuss pressing issues including the failure of his government to provide basic necessities like water and electricity to the populace, the conflict situation caused by separatist groups demanding the independence of the English speaking regions from the French-speaking regions of the state, and a peaceful political transition. 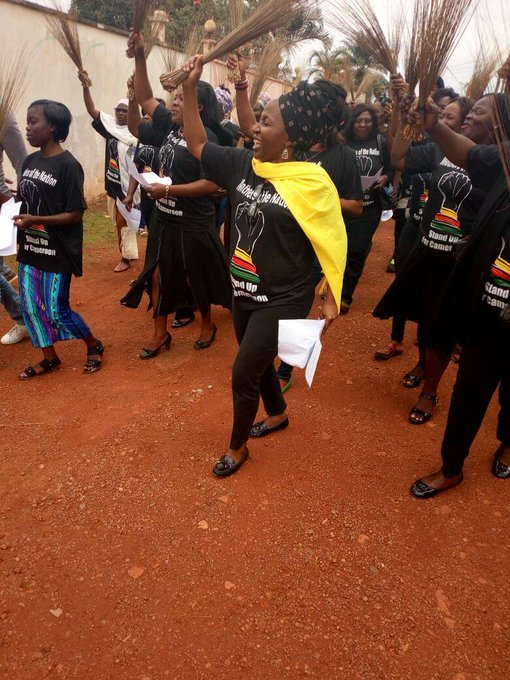 The women marched on the streets of Yaounde — Cameroon Concord News

The women were arrested by the police during the protest but about 40 have so far been released, the VOA reports.
Kahbang Walla, who is popularly known as Kah Walla said some of the protestors were unlawfully arrested and tortured by the police.

She, however, added that “The women were amazing throughout. They were fearless, they were determined, they were kept for about six hours … without any charge and without any apologies nor explanations from the government of Cameroon.”

Kah Walla believes that the country’s current situation is due to the poor leadership of President Paul Biya.

“As mothers of the nation, we feel it is our responsibility to stand up and to take the necessary steps to bring back harmony and peace. How do we facilitate a non-violent political transition for Cameroon? So this is a tremendous moment for the fight for respect of human rights, democracy, political transition in Cameroon,” she was quoted by VOA News.

The current challenges in Cameroon date back to pre-independence when the country was formed by combining two territories that were colonized by the British with the bigger territory being colonized by the French. But ever since the two territories became one after independence in 1961, the English speaking people have been complaining that they are politically and economically disadvantaged.

At the time, the English speaking region was then given two options by the UN; that is, either to join Nigeria or Cameroon as a federation. Many feel that the UN should have given the English speaking people the option of gaining independence and to stand on their own.

That missing option has contributed to some of the disturbances being experienced in the country. The quest for independence for Southern Cameroons started in October 2016 when lawyers and teachers took to the streets to complain about economic injustice as well as discrimination.