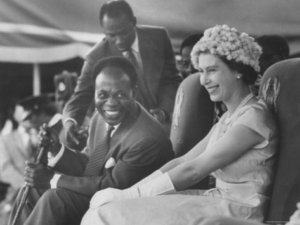 In 1961, 4 years after Ghana gained its independence from the British and just a year after Ghana became a Republic, Her Majesty Queen Elizabeth II made a royal visit to the country that was once under her crown. The Royal visit made waves worldwide as she was welcomed and hosted by Dr Kwame Nkrumah, the first president of Ghana. The visit was made shortly after bombings in Accra, the capital city, in protest of Nkrumah’s rule and the Queen was advised to cancel the visit. During her visit, the Queen was warmly welcomed by the President and a cheering crowd and was treated to a grand ball. The visit was to ensure that Ghana did not leave the Commonwealth and to ease the tension between the Britsh and Ghana after speculations that Nkrumah was getting close to the Soviet Union.