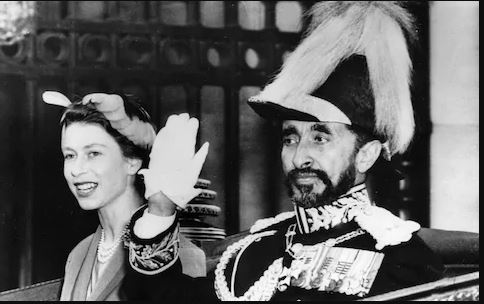 The Queen of England and her husband, the Duke of Edinburgh, went on a historic royal visit to Ethiopia on February 25, 1965, a few years after Emporer Selassie visited England in 1954. Despite never being colonized, the royal visit was an important visit to return the friendly gesture as well as tighten the bond between Britain and Ethiopia. The Queen’s royal visit to Ethiopia is said to be one of the most elaborate visits as Royalty met Royalty on African soil. On her arrival, Emperor Haile Selassie, Queen Elizabeth and her husband, Prince Philip, Duke of Edinburgh were transported on a state coach drawn by six white horses and surrounded by 100 horsemen of imperial bodyguards.