The five Ugandan terror suspects acquitted by a Ugandan court on Thursday have gone missing, with latest reports indicating that they may have been re-arrested just hours after being exonerated.

The five were among 13 terror suspects arrested in connection with twin terror attacks that rocked the Ugandan capital, Kampala, in 2010.

Justice Alphonse Owiny Dollo acquitted the five suspects on grounds that the prosecution did not provide enough evidence to link them to the terror attacks.

However, the five didn’t appear in court on Friday with the other eight accomplices for sentencing, raising questions as to their whereabouts. The suspects’ lawyer Mr. Caleb Alaka is reported to have confirmed their arrest just moments after they were set free, according to the Insider. 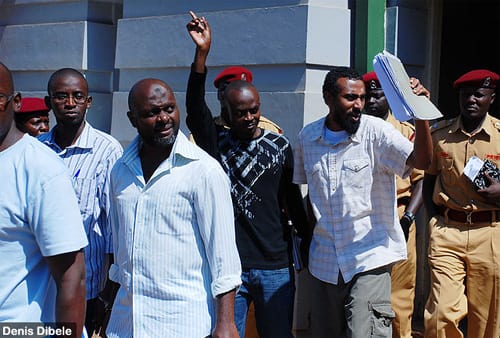 In July 2010, Uganda suffered two of the deadliest terror attacks to ever happen in the country. The twin attacks were suicide bombings targeted at football fans watching the 2010 FIFA World Cup Final match that was screening at two popular hotels in Uganda’s capital, Kampala.

Al-Shabaab, a Somali-based terror group, claimed responsibility for the attacks, which left at least 74 people dead and 70 injured. The group said the attacks were retaliation for the presence of Ugandan troops in Somalia.

In the wake of the attacks, 13 suspects were arrested and their trial began in March 2015.

Formed in 2004 as the militant wing of the Islamic Courts Union (ICU), Al-Shabaab has been fighting with Somalia’s transitional government for more than a decade in attempts to create an Islamic state in Somalia.

The decade-long war has left thousands of people dead and millions displaced. In 2007, the African Union’s Peace and Security Council formed a regional armed force (AMISOM) drawn from countries bordering Somalia, including Kenya, Ethiopia, and Uganda, for the purpose of restoring peace to Somalia.

The United Nations Security Council approved the presence of AMISOM (African Mission in Somalia) troops in Somalia and has since given the force the go-ahead to take all necessary measures to promote dialogue and reconciliation in Somalia.

Since the deployment of AMISOM forces in Somalia, Al Shabaab militants have been carrying out numerous terror attacks across East Africa in retaliation. The West, including the U.S., is also actively involved in the peacekeeping mission in Somalia.