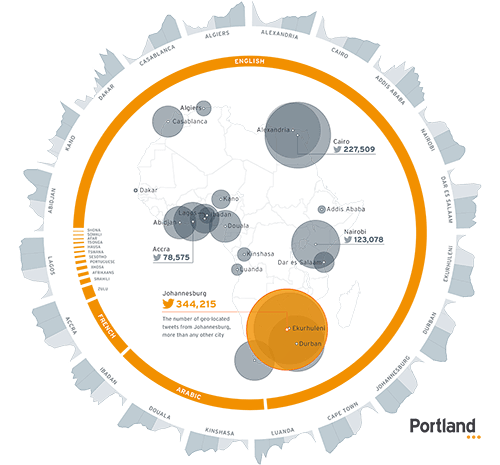 UK-based communications firm Portland just released “How Africa Tweets,” a study of geo-located tweets originating from Africa during the final three months of 2013. Just in time for the World Economic Forum on Africa and in the midst of the #BringBackOurGirls campaign, the second edition of the report dives in to city rankings, language, and the issues driving the conversation online. Twitter is beginning to find its feet on the continent, rapidly shifting the way people communicate day-to-day activities becoming a crucial tool for activists and brands alike.

RELATED: Why #BringBackOurGirls Is More Important Than WEF Africa

Here are a few key highlights:

The animated map (pictured) shows 24 hours of tweets from Africa and gives you an idea of where the key hotspots are. With 100 million smartphones on the continent and rising, we’re sure the entire map will be lit up in the coming decade.